Garfield's Take on the Best and the Worst: Pegs Coke Zero, Monster.Com as Top Winners; Toyota, Teleflora the Biggest Losers

Cash4Gold? On the Super Bowl? Really?

Things are even worse than we thought.

Not because it's pitiful that the down-and-out Ed McMahon and MC Hammer should humiliate themselves before 100 million appalled eyewitnesses. Not because in the Dustbowl Super Bowl poor NBC is reduced to accepting a schlocky direct-response spot thinly disguised as a winking spoof of schlocky direct-response spots. Not even because the economy is so bad that we're panicked into trading our jewelry and bridgework for 17� on the dollar of gold value.

The truly scary thing is that this skeazy exercise from Euro RSCG Edge and Arnold Worldwide will generate, by far, the biggest ROI of the Super Bowl. With the financial structures of advertising in a state of collapse, if creativity is so beside-the-point, then what is the point?

Answer that to the Leading National Advertisers' satisfaction, and you'll get cash for gold.

Oh, and for what it's worth, there were those other ads ...

COKE ZERO
CRISPIN PORTER & BOGUSKY
A word-for-word, shot-for-shot remake of Coke's sainted 1980 "Mean Joe Greene" ad, this one with the Steeler's Troy Polamalu, is interrupted by the now-familiar "Coke" brand managers. Now they're infuriated that not just the flagship's taste but its sacred imagery is being stolen by Coke Zero. Brilliant. And the updated jersey-tossing moment is a perfect kicker.
MONSTER.COM
BBDO, NEW YORK
The moose! The moose! We don't care if it's implicitly crude. We've never seen this joke before, and the joke, she is perfect.

DENNY'S
GOODBY, SILVERSTEIN & PARTNERS, SAN FRANCISCO
Ever wonder why movie mobsters won't use a phone but will sit in a diner booth loudly discussing their plans? So did Denny's, which shows us a table of wiseguys planning a whack -- but interrupted by a cheerful waitress spraying aerosol whipped cream onto their happy-face pancakes. Hilarious. Plus ... a free breakfast for everybody in America? Amazing, if it doesn't backfire. (We suppose delivery is out of the question.) 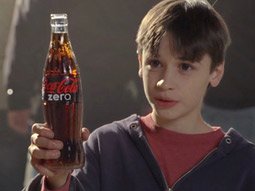 Mean Troy Polamalu: Coca-Cola updates its classic 1980 ad for Coke Zero.
HULU
CRISPIN
Alec Baldwin, in his "30 Rock" persona, admits TV is a conspiracy to rot your brain ... and now it's even easier, thanks to Hulu. Very, very funny. We'd fault it for not explaining just how Hulu lets you watch TV free online, but, jeez, "1984" didn't exactly demonstrate the Mac, did it?

CAREERBUILDER
WIEDEN & KENNEDY, PORTLAND, ORE.
How to tell if you don't like your job, vividly dramatized, in a "House That Jack Built" litany. We, of course, cannot relate because those of us in the finding-fault-with-others industry enjoy not merely professional but also spiritual fulfillment -- but about 90 million other suckers started uploading resumes posthaste.
CARS.COM
DDB, CHICAGO
The charming storytelling makes up for a missed opportunity: Why don't we see the ultraconfident hero totally freaking out at the prospect of getting hosed by a car dealer? Still, another sterling example of the power of narrative, and the pie-chart bit is wonderful.
COCA-COLA
WIEDEN & KENNEDY
"Heist" and "Avatar" are two very cheerful stories with fairy-tale sensibilities and "Open Happiness" endings. They're technically flawless and hugely product-centric. "Avatar" is even culturally timely. But they're cotton candy: sweet and insubstantial, and gone with barely a trace.
E-TRADE
GREY, NEW YORK
The baby is back, this time with a sidekick, another infant who childishly changes the subject from the shattered economy to sing an old Mr. Mister track, "Wings," in adult falsetto. Hmm, but is he changing the subject after all? "Take these broken wings and learn to fly again." Weird, adorable, funny and -- if you foolishly believe E-Trade is a solution to anything -- pointed.
GATORADE
TBWA/CHIAT/DAY, LOS ANGELES
The striking black-and-white panorama of sports icons -- now officially revealing itself as a Gatorade commercial. That settles that. What's G? So far so Good but Going to Get annoying if the agency doesn't Get busy.
GENERAL ELECTRIC
BBDO, NEW YORK
The Oz scarecrow is reimagined, stuffed with wire and semiconductors, singing (in Ray Bolger's original track) about a smarter power grid. It almost defies even the eco-magination that transmission and distribution confers corporate warm and fuzzies. But it does.
HYUNDAI
GOODBY, SILVERSTEIN & PARTNERS
Who needs jokes, CGI or chimpanzees when you have an extraordinary offer? Buy a new Hyundai and, if you lose your job, return the car at no risk to your credit. That is advertising in its purest form: news. On the other hand, a little dramedy is nice, too, such as depicting your jealous performance-luxury competitors angrily screaming your brand name to subordinates because you've been named Car of the Year. The idea is old; the execution, flawless.
NFL
IN-HOUSE/BBDO, NEW YORK
True Tales of NFL Success II: Usama Young, the world's worst stadium snow-cone vender, dreams of being a player and becomes a New Orleans Saint. Appropriately, the spot is very cool and very sweet
PEDIGREE
TBWA/CHIAT/DAY, LOS ANGELES
You know how there's always a path of destruction when your rhino stampedes through the living room? Here we see it dramatized, along with glimpses at other unruly pets, such as wild boars, ostriches, etc. Then the payoff title card: "Maybe you should get a dog." Very funny, and a nice way into Pedigree's pet-adoption do-gooding.
PEPSI
TBWA/CHIAT/DAY, LOS ANGELES
Will.i.am, of Black-Eyed Peas fame, is the equivalent of Bob Dylan? And Jack Black is the new Belushi? If you buy that, you'll have no problem with the premise: that Pepsi's youthful spirit keeps refreshing and refreshing. As Dylan sings it, "Forever young." (Wait. Gumby ... and Shrek??!!)
PEPSI
Arnell, New York
A spoof of Will Forte's "SNL" spoofs of MacGyver, featuring Kristen Wiig, Richard Dean Anderson (in the non-MacGyver role) and a self-conscious Pepsi product placement, a la the famous Verizon gag in "30 Rock." This second MacGyver send-up in two years (MasterCard had the last) is a lot to process in 60 seconds AND the intentionally-too-shaky handheld camera is nauseatingly intentionally too shaky. AND ironically mouthing "Refresh Everything" doesn't necessarily validate the slogan. Still ... PepSuber. Pretty great.
PEPSI MAX
TBWA/CHIAT/DAY
Serial slapstick showing all the painful injuries a man can stand, yet he can't stand diet soda. Hence Pepsi Max, "the first diet cola for men." Good positioning, and pretty good use of an otherwise tired comedy formula. (But the 15-second coda in the fourth quarter just sucks.)
SPRINT
GOODBY, SILVERSTEIN & PARTNERS, SAN FRANCISCO
What if roadies ran the airlines? Well, efficiency, lots of push-to-talk-beeping and -- though not specifically mentioned here -- probably free bags of meth in coach.

BRIDGESTONE
RICHARDS GROUP, DALLAS
These are two lovable and funny spots -- one in which a motoring Mr. Potato Head figure maneuvers sharply to silence the nagging Mrs. Potato Head, and another about futuristic astronauts returning to their lunar car and finding it up on blocks, its wheels stolen. But 1) Bridgestone is good ... how?, and 2) Why are the astronauts hip-hoppers? Is this a "black neighborhood" gag? Wow.
BUDWEISER
DDB, CHICAGO and WAYLON AD, ST. LOUIS
When Bud uses its Clydesdales correctly, America smiles and wells up with sentimental tears. These three spots will generate little but residual goodwill; they can't decide whether to be funny or sweet, and wind up being not enough of either. And there isn't a moment of surprise in any of them.
BUD LIGHT LIME
DDB
The idea of your beer magically bringing summer weather to the wintry north is OK, and the effect well-executed; it's also the exact opposite of what Coors Light and Miller Genuine Draft have done to cool down your summer.
CASTROL
OGILVY & MATHER
Chimps. Not E-Trade chimps. Not CareerBuilder chimps. Not HBO chimps. This time it's Castrol chimps, in a repair garage. (Grease monkeys! Get it?) The comedy isn't too crisp, but the "better than Mobil" claim sneaks through.
DORITOS
CONSUMER-GENERATED
Once again, the simple, powerful idea that these are amateur spots in $3 million slots delivers brand impact -- vs. the ads themselves, which show mainly why the amateurs are amateurs. The winner is a funny (crystal ball being thrown at vending machine) idea with terrible performances that ends with a generic crotch-injury gag. A second spot, imputing genie-power to snack chips, has nothing to do with anything but unaccountably turns a policeman into a monkey. Not cool.
GO DADDY
IN-HOUSE
The usual brainless boobage in one spot, even though it lost the online vote, but (we grudgingly concede) this "Shower" spot with Danica Patrick lampoons sex fantasy more than exploits it ... and actually connects it all to the brand.

KELLOGG'S FROSTED FLAKES
LEO BURNETT, CHICAGO
Talk about your grass roots. Pretty photography and slick CGI draw you into this smart exercise in branded community involvement -- Tony the Tiger's repair of 55 athletic fields around the country. The "Why Frosted Flakes?" is a bit elusive here, but it ties into the brand's (feeble) "Earn Your Stripes" program, equating breakfast candy with personal growth. Anyway, explaining that would have been grrrrrreat.
SOBE LIFE WATER
ARNELL GROUP, NEW YORK
It's got lizards. It's got animation. It's got football players ballet dancing. It's got hip-hop. It's got everything. And it's in 3-D! "Yo, who's got glasses? Anybody have 3-D glasses? Didn't we have some 3-D glasses? Come on, where ... oh, never mind. It's over."
TACO BELL
DRAFTFCB, IRVINE, CALIF.
It opens with a clever bit, along the lines of the best scene in "Swingers." A guy gets a girl's digits and dials her the moment she turns around. Then two other jokes occur: one about a Taco Bell dinner, one about him moving too fast, relationship-wise. Lost in all of this mess is the introduction of Taco Bell's new whatever-it-is.

AUDI
VENABLES, BELL & PARTNERS, SAN FRANCISCO
If the A6 weren't so fantastically gorgeous, this would be $6 million-plus down the drain. But factoring in the fame of English actor Jason Statham and the novelty of a noisy car chase, it's only about $5.5 million down the drain. Wanna compare yourself to the competition? See "Hyundai" above.
BUD LIGHT
DDB, CHICAGO
Shockingly bad. When your image hinges entirely on hilarious advertising, it's seriously dangerous to have un-hilarious advertising. Some smiles when Conan O'Brien loses his dignity in a Swedish beer ad, but the gags about cutting costs at work and the skier plowing into trees are both idiotic and insensitive.
CHEETOS
GOODBY, SAN FRANCISCO
The latest in snack-food vigilantism, showing Chester the Cheetah and a bystander conspiring to harass an obnoxious, spoiled Valley Girl. Maybe punking the mean girl provides some vicarious sense of street justice, and maybe that rubs off on Cheetos the way Cheetos rub off on your hand. But it's still juvenile and nasty.
H&R BLOCK
CAMPBELL-MITHUN, MINNEAPOLIS
OK, let's say the tax man is some sort of Grim Reaper, but ... here death is the taxpayer? So what's the point? And what does it all have to do with the "second look" benefit nominally being advertised? This is a badly executed not-quite idea.
TOYOTA TUNDRA
SAATCHI & SAATCHI, LOS ANGELES
They promised an "edge-of-your seat" thrill. Us, we really didn't expect the truck and trailer to skid backward, aflame, to certain driver death. Perhaps heavy-duty-transmission drama isn't easily transmitted.

TOYOTA
BURRELL COMMUNICATIONS, CHICAGO
This spot, which juxtaposes the sleek lines of the new Venza crossover with African art in an upscale home, is meant to appeal (read "pander") to black audiences. But pandering doesn't work when it so obviously condescends.

Bob Garfield
.
View all articles by this author