Brands didn't spend millions of dollars to be told 33% of comments to an ad were negative, positive or neutral. Brands bought them to sell products, and with any luck, leverage a 100 million-plus-person focus group to see how humans respond to the brand's message. As Ad Age Editor Nat Ives wrote in his review of Super Bowl ads, "In a divisive time for the country on issues such as immigration, much of the ad roster from Super Bowl LI felt too muted for the moment." But some brands did go big and bold, with strong creative obviously meant to break emotional ground. And big and bold creatives have more than just black and white responses, they are full of color. At Canvs, where our team of data scientists monitor social media platforms for emotional content using natural language processing, we dove into the numbers surrounding some of Super Bowl LI's most emotionally resonant spots.

Budweiser's "Born The Hard Way" tells the story of parent company Anheuser-Busch's immigrant founder coming to America with a dream: to brew a better beer. On Budweiser's Facebook page, the spot has already garnered 10 million views (including views from the pre-game pre-release), with over 12,000 comments, 50.2% of which expressed an emotion, according to our analysis.

The top emotion so far: love, which accounts for 49.1% of all Emotional Reactions (ERs) tracked.

A sample comment, from Facebook user DeAnna Boehm: "What a beautiful reminder of the HOPE this land offers-and the opportunities for those who have big dreams and want to work hard to make them come true. I raise a glass to you!! Thanks for the encouraging message. All of us need it!"

From Facebook user Sabina Rizvanovic-Merrick: "I don't understand football but I watch Super Bowl every year just for the commercials and every year Budweiser commercials are my favorite even tho I don't drink beer. Great job! And I also immigrated to this Country 19 years ago and I love it. This is home!"

Although viewers generally love the ad, hate (3.4%) was also expressed by consumers on Facebook. What drove the hate? Mainly how people feel about the beer itself. Over on YouTube, hate (13.2%) was also present, and was once again mainly directed at the taste of the beer -- although some of the negativity was directed to Budweiser for making a pro-immigration ad.

Another powerful ad came from 84 Lumber, which portrayed a mother and daughter's journey toward becoming legal American citizens. (Its 90 seconds wasn't even the full story; see the whole thing, the conclusion of which only appeared online, here.) The spot stirred up plenty of emotion in viewers, garnering more than 1.5 million views on the brand's Facebook page alone, and sparking 3,079 ERs among the comments. The top emotions were love (32.2%) and beautiful (16.1%). Other top emotions were enjoy (7.3%) and congrats (5.9%).

Notably, those that left negative comments were likely to get a response from the brand. For example, Diana Christine: "Good to know you are promoting illegal immigration. Now I know where to buy....hello Home Depot!"

84 Lumber's response: "Hi Diana, We do not condone illegal immigration. The journey of the mother and daughter symbolizes grit, dedication, and sacrifice. Characteristics that we look for in our people at 84 Lumber. President Trump has previously said there should be a 'big beautiful door in the wall so that people can come into this country legally.' We couldn't agree more."

Avocado prices have been rising, and Avocados From Mexico addressed this with its Super Bowl spot, which has garnered more than 8.2 million views on the brand's Facebook page. Out of more than 4,000 comments, Canvs detected just over 1,400 that expressed a specific ER, with 38.7% evoking love. Viewers also thought the ad was funny (19.7%) and just generally enjoyed it (12.9%).

Charles Cirgenski: "Wow! Excellent spot. I love avocados ten times more now. Or is it just the subliminal advertising... Oh no. They got me, too."

Audi took on the issue of the gender pay disparity with its "Daughter" ad, which has received more than 2.4 million views on the brand's Facebook page; 43.9% of all Facebook comments expressed some sort of emotion. The top emotions? Love (47.2%), enjoy (7.3%) and congrats/love (3.6%). When hate was expressed, it only seemed to inspire those that loved the ad to praise it even more.

Facebook user Nicki Hoffman Cermak: "Such an amazing message. The hateful comments make it clear why these messages are still necessary. Thank you for being a voice of reason for our future generation." 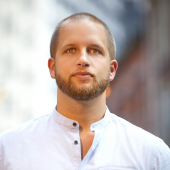 As the Founder and CEO of Canvs, Jared Feldman is working to improve how television networks, content creators, and advertisers measure the impact of an audienceâ€™s emotional reaction to content. When he founded Canvs in 2014, Jared created a robust qualitative research offering which has become the industry standard for emotion analytics. Thanks to Jaredâ€™s continued vision, Canvs was recently named as one of the most innovative companies in measurement by the Advertising Research Foundation and is the trusted measurement partner for clients such as Disney, Netflix, Sony Pictures. He was recently included on the Forbes â€œ30 under 30â€ list in the Marketing & Advertising category and was a recipient of a 2017 ARF Great Minds Award.