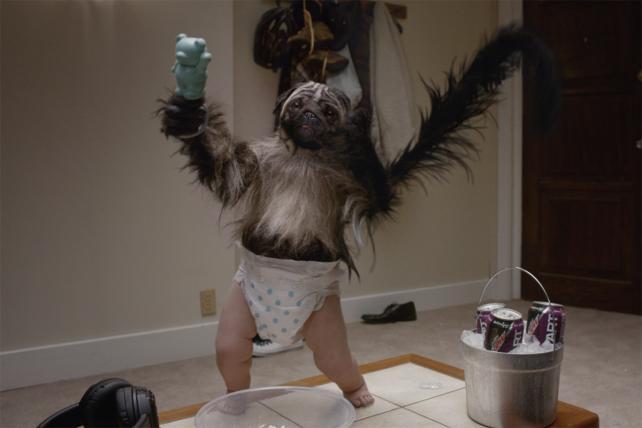 When two become one

PepsiCo is bringing its Mtn Dew and Doritos brands together in back-to-back Super Bowl spots, E.J. Schultz reports. The two 30-second ads, one promoting the lemon-lime flavored Mtn Dew Ice and the other for spicy Doritos Blaze, will star Morgan Freeman and Peter Dinklage, respectively. The approach appears to be a big-game first, although Pop Secret and Emerald Nuts shared a single weird ad in 2010 ("Awesomer").

Watch the teaser for the PepsiCo spots here.

Super Bowl LII marks Doritos' return to the game after sitting out last year with the end of its "Crash the Super Bowl" program. Its mashup with Doritos is the first Mtn Dew Super Bowl commercial since the, uh, mashup known as "Puppymonkeybaby" in 2016. If your nightmares have been getting boring, watch this one again now.

Stella Artois has inadvertently found itself in the middle of the #MeToo debate. Matt Damon, who stars in Stella's Super Bowl commercial promoting Water.org is in a bit of his own hot water over statements he made regarding the #MeToo movement. While discussing the Super Bowl commercial during the "Today" show on Tuesday, Kathie Lee Gifford asked the actor about his comment in a prior interview that sexual misconduct should be judged on a "spectrum of behavior." Damon apologized for the remark and said he needs to start listening more.

Keanu Reeves owns a motorcycle company? That's the biggest takeaway from Squarespace's announcement that the actor will star in its fifth consecutive Super Bowl commercial on Feb. 4. Reeves is an avid Squarespace user, at least according to Squarespace, where he hosts the site for Arch Motorcycle. Last year, Squarespace tapped John Malkovich for a humorous campaign that found the anchor trying to reclaim the domain name JohnMalkovich.com.

A lot of games in the shortest month

NBC Sports hosted a preview event for the Super Bowl and Winter Olympics in PyeongChang on Wednesday morning. The peacock network, which begins airing the Olympics just four days after the Super Bowl, is trying to rebrand the month of February "The Best Feb Ever." While there was little in the way of Super Bowl news, NBC did announce two new Snapchat Shows tied to the Winter games: "Pipe Dreams" and "Chasing Gold." It said 20 advertisers will extend their Olympic partnership to Snapchat.

Katie Couric also surprised reporters (she literally walked on stage and said "surprise") with the announcement that she will co-host the opening ceremony alongside Mike Tirico. The most recent opening ceremonies, for the Rio Summer Games, were hosted by Matt Lauer and Meredith Viera.

Motorcycles may get some unaccustomed play in Squarespace's ad with Keanu Reeves, which would be a departure for the Super Bowl, where they're a distant second to cars and trucks in terms for screen time. Perhaps the biggest role for a motorcycle in a Super Bowl ad so far came a 2004 spot for AOL starring the Teutul family from Discovery Channel's hit ''American Chopper'' reality show. Check it out in the Ad Age Super Bowl Archive here.

Perhaps even more exciting than the commercials, for some of us anyway, "Hamilton" star Leslie Odom Jr. will sing "America the Beautiful" before the Super Bowl. He joins a musical roster that includes Pink, who will sing the national anthem, and Justin Timberlake, who is headlining the halftime show.

Speaking of Timberlake, in case you were worried about his relationship with Janet Jackson, the former N'SYNC front man says he made peace with her after the infamous wardrobe-malfunction of 2004.