Fiat Chrysler Automobiles -- known for making sweeping social commentary in its Super Bowl ads -- opted this year to pour all of its money behind pitching its niche Alfa Romeo brand to the American public.

The Italian brand has a tiny market share in the states. But FCA has visions of making Alfa a bigger player here -- and the Super Bowl spots represent a major marketing step in trying to make that happen. All three of FCA's ads, totaling 120 seconds, were dedicated to Alfa Romeo. 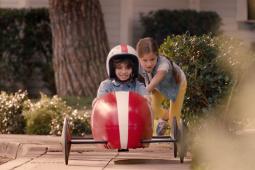 With the 2017 game coming amid intense political debate about immigration and refugee rights in the Donald Trump era, some viewers might be disappointed that FCA did not attempt to make a broader statement about unity. The automaker and Global Chief Marketing Officer Olivier Francois are known for classic Super Bowl ads like 2012's "Halftime in America" that featured Clint Eastwood attempting to rally Americans hurt by job loss.

But FCA had significant business-related reasons to go all-in on Alfa this year as it it seeks to relaunch and expand it in the U.S. The new lineup includes the Giulia sedan and a crossover called the Stelvio, the first SUV in Alfa's history, which debuted late last year at the Los Angeles auto show.

The first ad that aired in Sunday's game was a 60-second spot called "Riding Dragons." The agency behind it is Art Machine.

The phrase appears to perhaps be a subtle nod to the Alfa logo, which includes a red cross and a dragon/snake figure. For more on the logo, check out this 2014 post from Jalopnik. The ad weaves together images of children playing with historical footage of the Alfa brand, while declaring that "staying true to who you are is all that matters."

The second spot that aired, running 30-seconds, was by FCA roster agency The Richards Group. Called "Dear Predictable," it featured a female voiceover declaring that she found a "permanent escape from monotony," while Alfa Romeo's new Giulia sedan is shown racing at breakneck speeds.

The last ad that aired was a 30-second spot by FCA roster shop Doner.

The spot, called "Mozzafiato," has an Italian flair with the Giulia shown amid landscapes like a Venetian canal. Mozzafiato, it is explained, "means to take one's breath away." The kicker: "Some cars take your breath away. Only one gives it back."

But will this year's ads take viewers breaths away like FCA has done in past Super Bowls?

The automaker's classics include 2011's two-minute "Born of Fire" ad for the Chrysler brand that used the Eminem song "Lose Yourself" while introducing the iconic tagline "Imported from Detroit." That was followed in 2012 by the "Halftime in America" ad. It gained rave reviews except for feedback from some critics, like Republican strategist Karl Rove, who suggested it was a political statement in support of President Obama's auto bailout.

The next year came an ad called "The Farmer" for FCA's Ram brand. It gained wide notice with its use of radio legend Steve Harvey's "So God Made a Farmer" audio. But the spot also faced critics who complained it did not include nonwhite farmers.

For last year's game FCA dedicated two minutes to its Jeep brand, including one spot, "Portraits" by Cheil Worldwide's Iris New York, that celebrated the brand's 75th anniversary by using 60 images from around the world that showed famous people with ties to Jeep, such as Marilyn Monroe, Jeff Goldblum and BB King.

This year's ads -- which are devoid of even the slightest hints of politics -- seem unlikely to draw heavy criticism. And considering how politically divided America is at the moment, that could be a good thing for the automaker -- as long as it sells plenty of Alfa Romeos in the coming months.