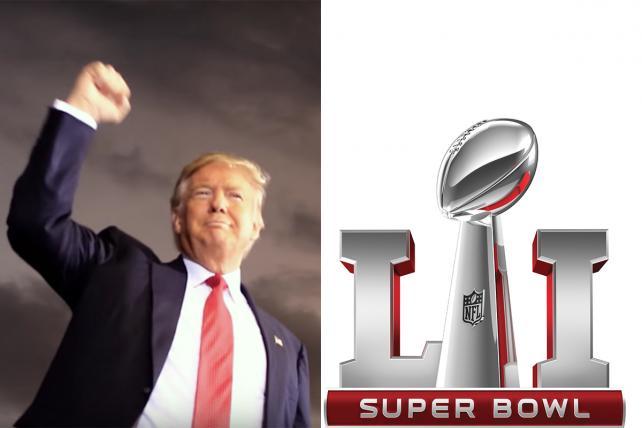 Every part of American culture seems affected by the charged political climate. With Super Bowl LI following the inauguration of President-elect Donald Trump by just over two weeks, the question is whether Super Bowl advertisers will use the big game to address the political moment, try to defuse the tensions or pretend nothing just happened.

As usual, their ads will no doubt brush many political themes, like manufacturing in the U.S., diversity, women's empowerment and of course, patriotism. But while many advertisers have used TV's biggest event of the year to tackle such issues, overt political ideology won't likely be tolerated this Super Bowl Sunday -- either by fatigued viewers or by Fox, which is airing the Feb. 5 game.

"The country has been fixated on [politics] for a while, so it only makes sense that some themes we saw during the election will make their way into Super Bowl spots," said Jason DeLand, founding partner, Anomaly, the agency behind Budweiser's upcoming Super Bowl commercial. "Sometimes the Super Bowl is a reflection of culture."

"We will see other brands rightfully and smartly stay clear of it with more humorous and light-hearted creative," he added.

Bud Light, no stranger to escapist advertising, is replacing last year's election-themed campaign with one about friendship.

One piece of election imagery that has already made its way into Super Bowl marketing is the border wall that Mr. Trump promised to build with Mexico paying the bill.

After family-owned construction supplies company 84 Lumber secured 90 seconds of national in-game airtime from Fox, it submitted creative that included a border wall. Fox rejected the ad for being too political, according to the company's agency. 84 Lumber then got the go-ahead for a version without the wall, but said it will post the original online on Feb. 5.

"Like it or not, we live in a politically charged environment," said Michael Brunner, CEO of Brunner, the agency behind 84 Lumber's Super Bowl spot. "And that environment influences the creative decisions we make, one way or the other. However, I don't think that means we should stay away from anything controversial."

"What it does mean is that brands really have to think long and hard about whether they want to be seen as taking either side," Mr. Brunner said. "The opportunity to take a stand and create real brand loyalists, or brand rejecters, has never been stronger. We've been lucky to work with a client like 84 Lumber who has never once, throughout this entire process, wavered in their commitment to creating and sharing their message of equal opportunity."

For many brands, the risk of alienating a large portion of the country is too great to play around with. It appears most Super Bowl marketers will try to avoid even the suggestion of polarizing points of view.

"We are going to stay away from opinions or plays on anything political," said Drew Slaven, VP-marketing, Mercedes-Benz.

Internet services provider and Super Bowl regular GoDaddy used to court controversy with sexually-charged ads that sometimes invoked politics. It kicked off a long string of big-game appearances with a raunchy spoof of Congressional hearings on broadcast TV decency. (Fox sold GoDaddy two in-game slots for that spot but only aired it once, calling it "very much out of step with the tenor set by the other ads.") But GoDaddy said this year it plans to stick with what it knows will work: humor.

"At the end of the day, it is important for the company to be positive," said Brent Vartan, managing partner at Bullish, GoDaddy's brand agency. "It isn't about giving our take on what's happening."

While marketers may not create ads that throw their political leanings in your face, messages about diversity, empowerment and inclusion will remain important themes, said Charles R. Taylor, professor of marketing, at Villanova University School of Business.

"I think marketers are going to steer clear of anything that even remotely resembles taking a side. There's just no upside in antagonizing half the country," said Mike Sheldon, chairman and CEO, Deutsch North America. "That said, I could see brands celebrating the fact that all Americans, no matter your side, are basically honest, decent and good people. That we're more united than divided, despite how we might feel right now."

But even marketers that don't intend to make a political statement might end up seeming to do just that.

Budweiser will use its 60 seconds to tell the brand's origin story. The spot dramatizes German immigrant Adolphus Busch's journey to America, where he established Budweiser in 1876. 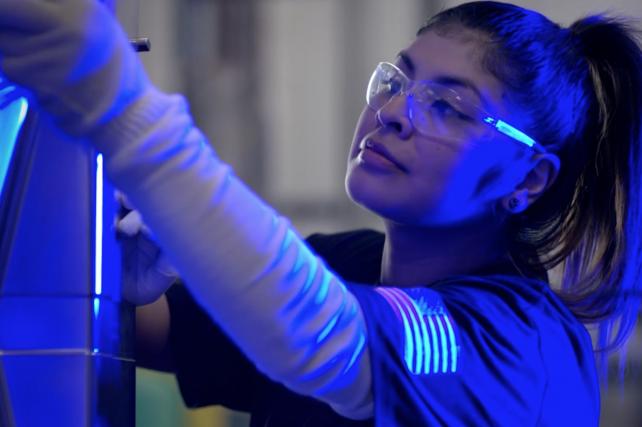 A scene from WeatherTech's 2016 Super Bowl ad, one in a series emphasizing American manufacturing.
Credit:
WeatherTech

Automotive floor mat maker WeatherTech has been America's cheerleader for the past three Super Bowls, with commercials that highlight the company's made-in-America motto. It's expected WeatherTech will continue to home in on these values in Super Bowl LI -- and likely get more attention for them, given the new president's focus on reviving U.S. manufacturing.

The company said the election hasn't changed its approach. "The election and political fever did not play a role in our creative," said Mike Magnusson, president and CEO, Pinnacle Advertising, WeatherTech's agency of record.

The Super Bowl has always been a place for marketers to inspire and create some-feel good emotions, as well as celebrate American culture. Cheerios featured a mixed-race couple in its 2014 Super Bowl ad, while Coca-Cola's spot from the same year included people from different ethnicities singing "America the Beautiful" in various languages.

While some of these types of commercials have generated their own backlash, for the most part they have been well-received by Super Bowl viewers.

Mr. DeLand said he expects to see brands talk about the country coming together, how we are more alike than different and are all Americans first and foremost.

"It would be a big mistake to play into partisan bickering, but it is not wrong for brands to say here are our values," he said.

Mr. DeLand pointed to Chrysler's 2011 Super Bowl commercial with the tagline "Imported From Detroit" as an ad that successfully weaved a dominant theme in culture at the time into its creative.

"I don't think people will touch it directly, but as a marketer, it would be foolish not to recognize the cultural vibe that's out there," said Kevin McKeon, chief creative officer, at Minneapolis-based agency Olson.

Marketers will invoke themes like unity and inclusivity, Mr. McKeon predicted. "Those are the Super Bowl ads that rise above the comedy bits and high jinx," he said.