A 30-Second Version of Super Bowl Spot Will Debut Online on Jan. 28
READ THIS NEXT
Amp spotlight: Who really won the Super Bowl?

Movie stars Tom Hiddleston and Mark Strong will round out a trio of British villains with Ben Kingsley starring in Jaguar's first-ever Super Bowl commercial, according to brand VP Jeff Curry. 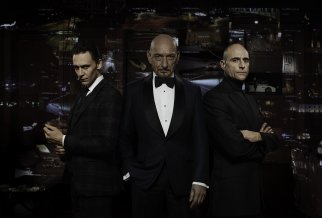 Jaguar has been running a teaser campaign positioning its new F-Type as a dangerously fast but sexy British bad boy "disrupting" Porsche, Mercedes-Benz and BMW in the sports car segment.

Jaguar aired its second teaser for the Big Game spot during NFL divisional playoffs telecast on Fox this weekend. Called "The Set-Up," the 30-second spot showed a well-dressed Mr. Kingsley waiting for the other two to arrive at his lair. Among the bad guys Mr. Kingsley has played are Don Logan in "Sexy Beast" and, most recently, Trevor Slattery/The Mandarin in the "Iron Man" franchise. Mr. Hiddleston will be recognizable to an American audience as Loki from the "Thor" and "Avengers" franchises. Mr. Strong played Lord Blackwood in 2009's "Sherlock Holmes." (It seems that all three actors have starred with Robert Downey Jr.)

"So they're coming. All the usual suspects. Oh, and one new one," he says, as we see the full-throated F-Type roaring across the tarmac at high speed. Kingsley adds, "You'll be hearing from us," as the ending directs viewers to a Jaguar microsite: BritishVillains.com.

The three stylish rogues and F-Type finally will be brought together on Jan. 28 when Jaguar and agency Spark44 unveil a new 30-second spot at the microsite showing Mr. Hiddleston and Mr. Strong arriving in London for their rendezvous with Mr. Kingsley.

The spot opens with Mr. Kingley asking why Hollywood movies loves casting British bad guys. "Maybe we just sound right," says a suave-looking Mr. Strong as he accepts the keys to his F-Type from his blond assistant and goes roaring off into the night.

Mr. Hiddleston makes the biggest entrance as his helicopter races an F-Type through the streets. "We're obsessed by power," he says with villainous glee. "And we all drive Jaguars," notes Mr. Strong as they arrive at Mr Kingsley's estate. Their host nods in satisfaction. "Oh yes, it's good to be bad," he says.

On Super Bowl Sunday five days later, Jaguar will air a beefed-up, 60-version of the spot during Fox's game telecast. The luxury auto maker initially bought a 30-second slot. But Jaguar liked the "cinematic" quality of the ad by Tom Hooper (Oscar-winning director of "The King's Speech") so much, it decided to spring for a 60-second spot. "It really deserved a longer storyline," Mr. Curry said.

The sophisticated creative idea and execution might go over the heads of some Super Bowl viewers watching the game at loud parties (especially if they've been drinking). Mr. Curry said he knows it's a risk but it's a risk worth taking.

Some other auto advertisers buying time on the Big Game include: General Motors' Chevrolet, Toyota, Hyundai and Audi.