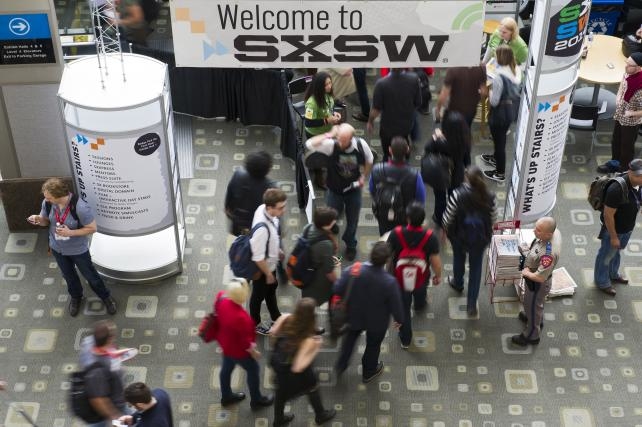 Attendees walk through the halls of the Austin Convention Center at South By Southwest Interactive Festival in Austin, 2014.
Credit: David Paul Morris/Bloomberg

Everyone on Delta Air Lines' 11:30 a.m. flight from Los Angeles to the South by Southwest festival on Friday will get expedited security processing, complimentary cocktails and a chance to win first-class tickets to London and New York.

Good luck booking a seat. This is an invitation-only junket to Austin, part of Delta's bid to grab more of the entertainment industry's travel business, which the carrier estimates is worth $1 billion a year.

The handpicked high-fliers paid $247 each to rub shoulders and share armrests on a new Boeing Co. 737-900ER. Delta's not identifying the passengers, but when it dispatched a special jetliner to the Sundance Film Festival in February, those on board included actors Kristen Wiig and Emile Hirsch.

"It was a party plane," said Gary Michael Walters, chief executive officer of Bold Films, a producer of "Whiplash," the Oscar-winning movie. "It was very much a club of people who are significant players in the business. To have them all pre-assembled, it jump-started the film festival for me."

Delta, the world's third-largest airline, runs what it calls its "festival shuttle" with help from United Talent Agency, whose clients include actors Angelina Jolie and Benedict Cumberbatch. The flight to the South by Southwest music, technology and film festival is intended to show Hollywood there's a worthy alternative to American Airlines, the world's No. 1 carrier, and No. 2 United Airlines.

Delta hired UTA to open doors in Hollywood and help decide who to invite to fly. Chris Day, a spokesman for the agency, said the shuttles have showcased the airline and "created a valuable halo effect."

The 180 passengers will bypass most airport hassles on Friday, with special check-in and security lanes, and be treated to a pre-flight brunch by the restaurant Lemonade at Los Angeles International Airport. Everyone will receive a subscription to Spotify's premium music streaming service and a gift from Columbia Sportswear. Amenity kits will be packed with several items, including from the skincare company Malin + Goetz. Wi-fi will be free on board.

Laura Masvidal, a spokeswoman for American Airlines Group, declined to comment on Delta's shuttle gambit but suggested in an e-mail the carrier isn't worried.

"American is Hollywood's preferred airline at LAX," Ms. Masvidal said. "Our employees know how to deliver an elegant, private experience for our most scrupulous customers and have been doing so for decades."

$8,000 Flight
The Forth Worth, Texas-based airline sells the most expensive domestic ticket in the country, for a private front-cabin berth to New York from Los Angeles and San Francisco and back on a specially configured Airbus Group NV A321 jetliner. The price: more than $8,000. That's a budget-buster for most road warriors but not unheard of for a senior figure in entertainment or media.

Los Angeles-New York is the most lucrative domestic route for the U.S. industry. Mr. Goswami said Deltahas it sights set on getting a bigger piece of it.

Delta, based in Atlanta, has been been going after the entertainment and media business in Los Angeles in earnest for two years, Mr. Goswami said. Shares of the company rose 79 percent last year.

In October, it introduced a new nonstop to London in a partnership with Virgin Atlantic Airways, and it has since added flights to Vancouver, the Canadian city that's a favorite of Hollywood studios and where they've shot dozens of movies and shows, including "The Interview" and "Fifty Shades of Grey."

'Shared Relationships'
The steps were the latest "toward becoming the carrier of choice for Los Angeles' entertainment and production communities," Delta boated in a release announcing the moves.

"Everything we are doing is centered around earning more of that very, very good quality business," Mr. Goswami said. "They have productions that are on schedules, they have to have good air travel quality, and we aim to provide that with all the customized services that come with it."

Mr. Walters, the producer who took the shuttle to Sundance, called it a "clever" idea and said it made him think twice about his loyalty to JetBlue Airways' Mint flights to New York, which were introduced last year and have lie-flat seats. Delta, he said, "has moved up in our consciousness."

Jason Yeh, a senior associate at the venture capital firm Greycroft Partners who'll be on the plane to Austin, said he could see how the trip might lure frequent fliers.

"I think its a great opportunity for them to try to gain market share," Mr. Yeh said, adding that the shuttle was an opportunity for him as well. "Shared experiences are what create great relationships."