'Absolutist' Privacy Stands Could Hurt Cause in the Long Run, President Argues 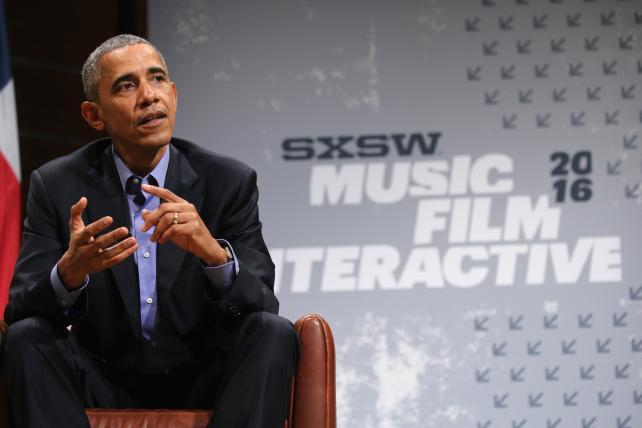 President Barack Obama speaks on the opening day of the SXSW Interactive Festival in Austin.
Credit: Neilson Barard/GettyImages for SXSW

President Obama asked a tech-savvy audience attending the first day of the South by Southwest Interactive Festival in Austin to help tackle the challenges facing the country.

"We're in a moment in history where technology, globalization, our economy is changing so fast," Mr. Obama said. "And this gathering, South by Southwest, brings together people who are at the cutting edge of those changes. They can offer enormous opportunities but are also very disruptive and unsettling. They empower individuals to do things they they could never have dreamed before, but they also empower folks who are very dangerous to spread dangerous messages."

Mr. Obama said audience members should develop technology, for example, to ease the voting process. "We systematically put up barriers and make it as hard as possible for our citizens to vote," he said. "And it is much easier to order pizza or a trip than it is for you to exercise the single most important task in a democracy." (He didn't mention examples, but Domino's lets you order pizza by emoji.)

"We want to make sure that we're using big data, analytics, technology to make civic participation easier," Mr. Obama said. "Both increasing voting rates and making sure that people are informed about who they're voting for and why they're voting."

"The reason I'm here really is to recruit all of you," he said.

Mr. Obama came to South by Southwest amid the escalating legal and PR battle between his Department of Justice and Apple, which is fighting a court order to help the F.B.I. break into the iPhone of one of the San Bernardino, Calif., shooters in December. He also arrived two years after Edward Snowden addressed the same conference by videoconference from Russia, telling the crowd then that extensive government surveillance like the kind he revealed in 2013 was "setting fire to the future of the the internet."

Mr. Obama did not bring up Apple, but his interviewer at the Long Center, Texas Tribune CEO and editor-in-chief Evan Smith, said many readers wanted the president to address it. Apple CEO Tim Cook and many of his company's usual rivals have argued that following the court order would effectively let the government into anyone and everyone's iPhone.

"The whole Snowden disclosure episode elevated people's suspicions," Mr. Obama said. The government's interest in tracking citizens and its ability to do it are nothing like Mr. Snowden, not to mention Hollywood, make it seem, he added. "It doesn't work that way," he said. "Sometimes I'm just trying to get a connection. But look, that was a real issue. I will say that the Snowden issue vastly overstated the dangers to us citizens in terms of spying."

"I am not interested in overthrowing the values that have made us an exceptional and great nation simply for expediency," Mr. Obama continued, saying he was on "the civil liberties side" of the broader issue. "But the dangers are real."

"If technologically it is possible to make an impenetrable device or system where the encryption is strong that there's no key, there's no door at all, then how do we apprehend the child pornographer, how do we solve or disrupt a terrorist plot?" he added. "What mechanism do we have available to even do simple things like tax enforcement?"

"If government can't get in then everybody's walking around with a Swiss bank account in their pocket," he said. "There has to be some concession."

And if the tech sector doesn't help find a solution now, he warned, a "really bad" event down the road could swing the political pendulum in favor of far greater surveillance abilities than the government is seeking now.

The crowd was friendly, greeting Mr. Obama with a standing ovation and breaking into cheers when he mentioned the Affordable Care Act (by way of recalling an "embarrassing" moment, the disastrous online rollout, when government needed the private sector's help). Audience members applauded, too, when he said Texas opposed easier voting not because of security concerns but because "the people who are currently governing the good state of Texas aren't interested in having more people participating." But there was more audible enthusiasm for the question about Apple's case than for the response.

Casey Gerald, co-founder of MBAs Across America, said in the session immediately preceding Mr. Obama's talk at Dell Hall that tech perhaps couldn't do as much as is being asked. Government and other institutions can build equipment to hear black holes and lay miles of fiber optic cable, Mr. Gerald said, but they struggle to hear some citizens' needs or lay safe water pipes in Flint, Mich.