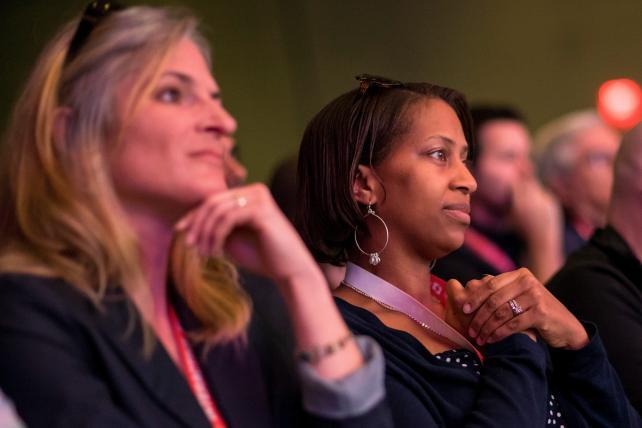 Attendees listen as Senator Cory Booker, a Democrat from New Jersey, speaks during the 2017 South By Southwest Conference in Austin, Texas, on Friday. Politics is looming large from the outset.
Credit: David Paul Morris/Bloomberg

FBI Director James Comey had to cancel his planned trip to the SXSW Conference, citing "scheduling conflicts" that definitely had nothing to do with trying to clear the agency of tapping Donald Trump's phones during the campaign. Delta offered people on my overbooked flight $800 each to find some other way to Austin from New York. And other flights were canceled outright as some hopefully final winter weather messed up long-planned itineraries. But Day One of SXSW got underway anyway, with thousands of attendees again on hand to line up for badges, food, panels and parties. -- Nat Ives

If the first day of panels was any indication of how the rest of the tech, film and music confab will play out, there will be plenty of Trump analyzing, questioning and, unsurprisingly for this crowd, bashing. At the center: how news organizations are covering a Trump presidency. CNN's Jake Tapper told attendees that when he frames questions for the air, he thinks about whether his kids be proud of him. And looking ahead already to the 2020 presidential election, Tapper said there needs to be more coverage of policy in a way that helps people understand what it means and less focus on all of the controversy. -- Jeanine Poggi

BEST SESSION TITLE OF DAY ONE

"Feelings: How Can We Suppress Them? Meet Up"

The brands are harder to find at this year's SXSW. There are 350 official sponsors, compared to last year's 450, and that has been the talk among many agency and ad folks who are veterans of the event.

There were whisperings that brands don't want to spend as much as they once did. Perhaps, it's just a correction from the brand overload of the past few years. But there also don't seem to be real breakout apps to define the event as happened in previous years, when Twitter, Foursquare, Meerkat and so many others basically made their debuts in Austin.

"Foursquare used to have these massive parties, and now I don't even think they're here," said one media executive, speaking on condition of anonymity so as not to upset clients that are here. "A lot of companies are pulling back."

Now, some major tech companies like Facebook have promised a more subdued presence than they had in the past, and Twitter is hosting only private events. That seems to be the theme for many companies, which aren't making a splash but they are hanging around the periphery in rented homes and spaces with invite-only guest lists. -- Garett Sloane

Promotions for upcoming TV shows and movies, at least, are in full effect. Hulu made a mysterious scene in downtown Austin with a march of apparent cultists, silent women all dressed in red smocks and white bonnets.

The young women lined up in double-file line, looking solemn in their sisterwives outfits, and offered no explanation for their appearance. They certainly got SXSW-goers to look up from their smartphones to gawk, and handed out little cards that said, "Don't let the bastards get you down."

Or they just whispered, "Praise me," to freak out a bystander or two.

It turned out the whole scene was orchestrated to promote Hulu's new series "A Handmaid's Tale."

If you see them at #SXSW ask them, "Should we walk by the river?" #HandmaidsTale pic.twitter.com/3RdpPoZKeC

Who doesn't want to see what Tom Cruise is like while on set? That was almost the bigger thrill of Universal's "zero-gravity" virtual-reality exhibit for "The Mummy." It took viewers into the air with the crew for the summer release, for the part of the shoot where Cruise and his co-star get thrown around in a crashing plane and feel that weightlessness. Of course, Cruise had the bright idea to actually shoot the scene in a plunging plane to get the zero-G just right.

The VR installation takes up prominent real estate at the Austin Convention Center. The viewers sit in moving pods that simulate the ups and downs of the airplane, and show what happens behind the scenes.

It doesn't quite convey that floating feeling, but you do get up close to Cruise, feeling like you're in the plane with him.

The team had to do about 50-plus takes, and Cruise seemed like he might be the only one actually enjoying himself by the end of it, while everyone else was just along for the ride.

Free Voodoo doughnuts on 6th, just find one of these guys and they'll give you a voucher!! @thefreenoms #SXSW #sxswnoms pic.twitter.com/pJlRmrVEtc

Ridley and Jake Scott as well as AMD, meanwhile, promoted "Alien: Covenant" here with some eerie branded content (not a phrase we get to write every day). -- Garett

THRILLIST NOT SO THRILLING

Not sure if I should be outraged or amused at the girl in her underwear gyrating at the Thrillist party Friday night. It all felt a bit like forced fun. The chaotic line outside V Austin made it appear as though the party was packed and the use of various colored wrist-bands to indicate just how VIP you are certainly made it more alluring to those who yearned after the apparently ultimate white band. But the wait to get in was more exciting than the actual party, where at midnight a smattering of people were dancing, but most just sipped bottled beer off to the side. Or maybe I'm just too tired to party like I'm still in college. --Jeanine

One more sign that politics is poised to rule SXSW 2017: Tumblr is turning its popular annual party with live bands into what it calls a rally for Planned Parenthood. Instead of a name like "Fuck Yeah" like usual, Fast Company reported, this year's event will be called "Never Going Back":

David Karp, Tumblr's founder and CEO, took a personal interest in the stories he saw on Tumblr -- he joined the organization's board of directors in 2014 -- and on the first day of SXSW, he joined Planned Parenthood executive director Cecile Richards on a panel about "Activism, Allyship, and Where We Go From Here" to discuss the way that the tech industry can support the organizations currently under threat.

Jeanine was shut out of an overflowing panel discussion on why Netflix killed Max, its unreleased concierge service, and couldn't even squeeze into a panel on "Humans Robots + Microbes: The Challenges of Mars," but there were hundreds of empty chairs for "Get a Warrant: The Fourth Amendment and Digital Data." We're looking forward to the face-off Sunday between "Game of Thrones Showrunners" and "Infinite Food With Microbes." -- Nat