Amp Spotlight: The Top Agencies in the Southwest 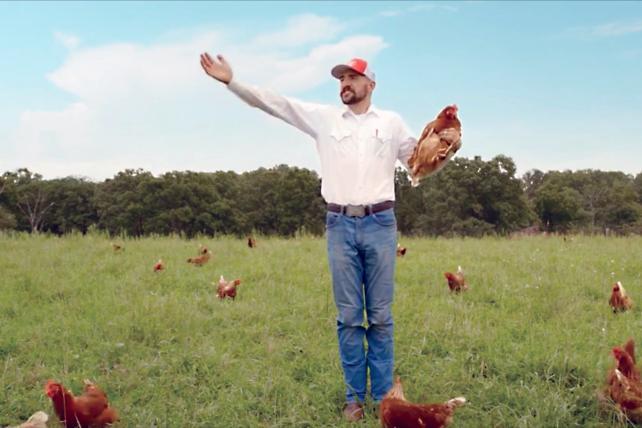 Every year at this time, the collective gaze of the creative world turns to Austin and South by Southwest like the Eye of Sauron. But in addition to Georgia O'Keefe, the Grand Canyon, Gary Clark Jr., legal bud and actual Tex-Mex cuisine, the American Southwest is home to some of the most innovative advertising talent in the country. Here are the top agencies in the region that have grabbed our attention.

Founded 2014
The brainchild of former Mother New York cohorts Rob Baird, Seth Gaffney and Krystle Loyland, Preacher quickly established itself with fun and quirky ads for brands like Bumble, Tommy John and Squarespace—and even the David Lynch Foundation. The agency's spot for Vital Farms, proclaiming the brand's pasture-raised eggs not just cage-free but "bullshit-free," helped Preacher win Ad Age's 2018 Silver as Southwest Small Agency of the Year. "Everyone's trying to figure out how to innovate in this industry," Loyland told Ad Age back in 2014. "And to us, it feels like taking risk, putting a little more skin in the game is the only way to get there." Their recent Super Bowl spot for Boston-based home security company SimpliSafe—both the agency and client's first Big Game showing ever—put Preacher's skin in the game in a memorable way. "Fear Is Everywhere" opens with a homeowner leaving his house, cutting to a newspaper that reads, "It's Worse Than Yesterday." The ad follows the homeowner as he tries to move through his day in the face of constant fearmongering and ends on a strong note: "In a world full of fear, your home should be anything but. Because home is a place you should simply feel safe."
Click here for more.

Founded 1976
Headed by legendary ad man and founder Stan Richards, the Richards Group is currently the largest independently owned agency in the U.S. The agency's recent spot for Jeep, "More Than Just Words," was a centerpiece of Fiat Chrysler's "Big Game Blitz" digital-only strategy to sit out the first Super Bowl since 2009. A visual interpretation of "The Star-Spangled Banner," performed for the soundtrack in a mostly piano rendition by OneRepublic, the ad was viewed online 106 million times. In December, the Richards Group was selected as the lead creative shop by Spoetzl Brewery, the 110-year-old brewer of Shiner Bock.
Click here for more.

Founded 1988
Crispin Porter Bogusky has gone through many changes in the past few years, closing its Miami and Los Angeles offices and losing some top talent, including a core group who left to form Work in Progress in 2016. But the most significant development, the return of co-founder Alex Bogusky as chief creative engineer last August, has the industry intrigued about what he'll do to bring CPB back to the glory days of his previous tenure, when Ad Age named it the Agency of the Decade. CPB's latest campaign for Domino's, "Points for Pies," encourages customers to use the brand's app to snap pics of pizza—not just Domino's, but any pie—in exchange for loyalty points, which can be then exchanged for free Domino's.
Click here for more.

Founded 1971
GSD&M, Austin's largest agency, has won acclaim for creative work for clients including Dodge, Avocados from Mexico and Harry's razors. Earlier this year, the shop produced a PSA for the Jewish Federation of Greater Pittsburgh. After the horrific Tree of Life synagogue shooting in the Squirrel Hill neighborhood, GSD&M reminded the grieving community of its unique ability to come together. "I know how tough it is some days to look with hope and confidence on the months and years ahead," the late hometown hero Mr. Rogers says in voiceover, over scenes of community members from various religious and ethnic backgrounds coming out in droves to support one another (including a man holding a sign that reads, "Hatred Can't Weaken a City of Steel"). "I'm so grateful to you," Rogers continues, "for helping the children in your life to know that you'll do everything you can to keep them safe and to help them express their feelings in ways that will bring healing in many different neighborhoods."
Click here for more.

Founded 1998
If LatinWorks knows one thing, it's that identity matters. Case in point: the success of the "Ponle Acento (Put an Accent on It)" campaign for Major League Baseball. Acknowledging that 27 percent of all players in the league are of Hispanic descent—as are an equally significant percentage of their fan base, undoubtedly—MLB took a major step toward inclusivity by encouraging players to celebrate their Latino heritage by putting the proper accents on the names on their jerseys. The campaign won LatinWorks a Bronze Lion at the Cannes Lions International Festival of Creativity in 2017
Click here for more.

Founded 2016
Who needs third-wave hipster coffee anyway? That was the message indie agency Work in Progress masterfully communicated in their recent pedicab café campaign for Nescafe. The agency, set up by former Crispin Porter & Bogusky staffers, had a bicycle-driven "coffee shop chauffeur" make its rounds on Canadian college campuses to turn students' attention away from toiled-over $7 lattes to the ease of the brand's new instant coffee sachets, which they could sip en route to class. In a similar effort to combat the tyranny of hipster culture, WIP's "Anti-Brunch" campaign for family restaurant chain Village Inn saw a branded truck drive around Denver, handing out coffee and a "brunch translator," which identified convoluted menu items like "pain perdu" as "French toast" and "potatoes rosti" as "hash browns." "Will we stop everyone from going to brunch? No," said WIP partner/creative Matt Talbot. "But if we can save even one person from a two-hour wait and $30 avocado toast, it's all been worth it." Now that's a message we can all get behind.
Click here for more.

Founded 2002
If you've spent a significant amount of time in the Southwest, you may have seen the following bold statement on highway billboards and truckside ads: "The Best Ad Agency in Texas Is in New Mexico." After being named Ad Age's Southwest Small Agency of the Year in 2018 (following a year in which the shop was named one of the Best Places to Work), McKee Wallwork was emboldened to put out a tongue-in-cheek statement advertising their services in the Lone Star State. McKee Wallwork's creative campaigns for clients as diverse as the Reelz Channel, International Paper and French Funerals & Cremations ("Reinventing Death") are just as offbeat and original.
Click here for more.

Founded 2002
Working with government agencies such as the Colorado Department of Transportation on campaigns including 2015's "Beware of the Beltless" (which underlines the dangers posed to everyone on the road by unbelted passengers) and 2016's "Dangerous Combinations" (on the risks associated with driving while high, which became a safety issue after Colorado became the first state to legalize the recreational use and possession of cannabis, in 2014), Amélie has long been committed to social progress through their powerful behavior-change campaigns. "That's our specialty: taking otherwise mundane topics that have become boring [like] health, safety, education and … sparking conversations," co-founder Robin Ashmore told Ad Age when Amélie was named the Southwest Small Agency of Year in 2017.
Click here for more.

This article was written by Studio 30 for Ad Age Amp, a new platform for creative work, companies and people. Claim your page. Own your story. Learn more at adage.com/amp.