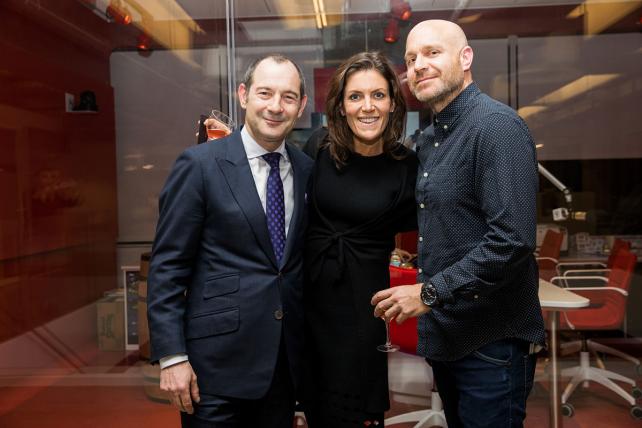 Ever wish you could have a drink with DDB's Wendy Clark, GroupM's Rob Norman or McCann's Rob Reilly?

Well, now you can. That trio christened the first 'Tagline' podcast presented in conjunction with Ad Age and iHeartRadio and sponsored by Diageo's Bulleit Frontier Whiskey. This first episode of the 30-minute podcast begins Feb. 6 and is a lively discussion led by GroupM Chief Digital Officer Mr. Norman about whether advertising creates culture or chases it.

Among the issues tackled as Bulleit's mixologist serves up cocktails for DDB President-CEO North America Ms. Clark, McCann Worldgroup Global Creative Chairman Mr. Reilly and GroupM chief digital officer Mr. Norman, are why the Super Bowl is such a key cultural moment; the role of advertising in consumers lives; and what the industry learned from the presidential election.

Here's a sneak peek at a few quotes.

On the role of advertising in culture: "Advertising is an uninvited guest" in people's lives, said Ms. Clark, noting that Americans are exposed to 6,000 brand messages a day. To stand out, you need to give them a reason to pay attention, or as she called it, a "so what." Mr. Reilly added that advertising isn't about a campaign but a platform that can can take a brand into the next hundred years. It's about "bringing something meaningful into people's lives."

On the election: "If you are not studying the outcome, you are not current with culture," said Ms. Clark, noting it was an object lesson for marketers and agencies in the danger of losing touch with the American mainstream. "We cannot get too far removed from those we are trying to influence," she said. The election, she said "changed everything about the way we think about marketing brands to people."

On the Super Bowl: "This is our Oscars, our moment in time," said Mr. Reilly, noting that it's as much an industry event as a consumer happening. If an ad is done really well -- he cited the Weiden & Kennedy "Imported from Detroit" spot from Chrysler -- it makes him proud to be in advertising. "It's a moment when we can celebrate collectively," he said. "All boats rise."