And They're Not Just for the IPhone Anymore

The minimalist Japanese retailer launched a series of iPad apps that transferred its characteristic style in clothing and home goods -- spare, clean and functional -- into digital products. Calendar (free) helps organize appointments and syncs with Google calendar, Notebook ($3.99) is a product to sketch and jot and Muji to Go (free) is a tool for travelers with a world clock and calculator.

WEBER'S ON THE GRILL IPAD APP

This iPad app has a meat timer. If that weren't enough, the app cookbook from the outdoor grill company also contains recipes, how-to videos and grocery lists. The app is just the latest in cookbooks from Weber, which reported at Ad Age's ME Conference in November that it sold more than 1 million cookbooks.

This iPad app from Kraft Foods is a tool for parents to teach their kids healthful habits. While Kraft achieved app fame with its iFood Assistant, it's recipe app for iPhone, the marketer did not just make that success bigger for the tablet platform. Instead, it looked to mobile agency Hyperfactory and the editorial prowess of its magazine-publisher parent, Meredith Corp., to craft the editorial app -- interlaced with lots of Kraft products of course -- aimed at parents.

While the coffee-chain launched this mobile payments app last September, it added in a loyalty program and expanding the mobile payments program from test stores in its hometown Seattle, Northern California and 1,000 Target stores to 300 more locations in New York City and Long Island this year. The app, available for iPhone, iPod Touch and BlackBerry, still remains one of the biggest mobile payments programs in the U.S. to date.

Not only does the app contain all the shapes, sizes and designs for Tiffany engagement rings, it also has a sizing tool where a clueless bachelor can put an existing ring on the touch screen to compare her size to the standard ring sizes.

To find your perfect lighting scheme, this app lets you take a picture of a room, adjust the lighting to what you're after and then constructs a shopping list of GE products to achieve those ideal levels.

The electronics retailer created a mobile app on iPhone, Android and Blackberry, meant to be used in the theater for the movie "Despicable Me." While the film is playing, the app dims the phone's screen and silences the ringer, but during the end credits it translates what the cartoon characters are saying in their strange language.

For the "Toy Story 3" release this summer, Disney created an app where fans could buy tickets to the film right on the social network and also invite friends to do the same. When a Facebook user buys a ticket, it publishes the purchase to his or her news feed and invites others to do the same. Disney has since used the tool for later releases, like the most recent "Tangled" movie. 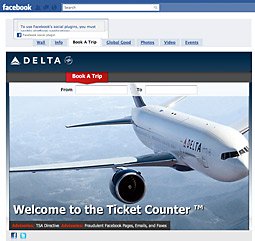 The Facebook tab on Delta's fan page lets users search, book and share flights within the social network. Built by Alvenda, the app is a first for the airline industry -- the transaction is completed within the social network, while an earlier tool for European budget airline Easy Jet started the process on Facebook but jumped to its own website to complete the sale.

Following the lead of rule-the-headlines-startup Groupon, digital agency R/GA built the world's-largest retailer a group-buying app on Facebook called Crowdsaver. The first deal flipped on nearly 20% off a plasma TV with 5,000 likes. Walmart has since launched other deals, such as $6 off the "Back to the Future" DVD trilogy.