Limited-Edition Package Features Simone Biles on One Side, Full Team on Other
READ THIS NEXT
Tokyo Olympics delayed one year after virus wipes out 2020 Games
Kellogg's Gold Medal Edition boxes of Special K Red Berries feature Simone Biles on one side
Credit: Kellogg's

Kellogg's decision to sponsor a certain Olympics newcomer and the USA Gymnastics team has paid off with some big wins.

One side of the box features Simone Biles after she won her individual all-around gold medal on Thursday. The flip side features the full winning women's team -- Laurie Hernandez, Aly Raisman, Ms. Biles, Madison Kocian and Gabby Douglas -- who dubbed themselves the Final Five after they won team gold on Tuesday. 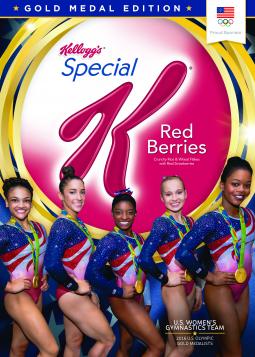 This time, though, the boxes (and the cereal) are free --- but harder to come by. Kellogg said it is only offering them in limited quantities to those who sign up on KelloggsFamilyRewards.com. It was not immediately clear whether a store version would follow. Given the following the women have, particularly Ms. Biles, it seems like a no brainer for the brand as it tries to boost cereal sales.

In April, Kellogg announced a new tagline, "What Gets You Started," in its Olympics marketing that ties the Olympics with the idea of cereal helping people start their days. In a departure from its previous Olympic efforts, the cereal marketer opted to feature athletes who were looking to snag a spot in the Olympics for the first time, rather than sponsoring athletes who had already been to the Games.