Chobani's new Olympics campaign marks the company's biggest marketing push of the year, spanning everything from yogurt lids to late-night TV as the marketer tries to turn sports fans into Greek yogurt fans.

The campaign includes a TV spot (above) that will air starting July 8. In all, Chobani plans to run more than 40 videos as part of the campaign, from commercials to digital video profiles, workout routines and cooking segments with the athletes it is sponsoring.

Chobani is using a new tagline for the campaign, "You Can Only Be Great If You're Full Of Goodness," rather than the "Naturally Powering Team USA" line it used for the London and Sochi Games.

"This year we decided to kind of broaden the aperture a little bit," said Chief Marketing and Brand Officer Peter McGuinness, saying the campaign is meant to showcase the values associated with the Olympics, the athletes it chose and the company itself. "We're just trying to complement the Olympic equity in an authentic way."

The goodness wording will also be tied to the "No Bad Stuff" nomenclature Chobani has been using to emphasize that its products do not include artificial ingredients or GMOs.

Opperman Weiss is Chobani's agency on the project.

The new tagline stems from a comment Chobani Founder Hamdi Ulukaya made at a ceremony when he donated a baseball field in New Berlin, N.Y., where the company is based, said Jeff Weiss, principal at Opperman Weiss, who has worked on various Olympics campaigns over the years, including Kodak spots in the 1980s.

"There's just nothing false in there, there's no tricks," said Mr. Weiss. "I think that the brands that are really succeeding right now with people are the ones that are really coming from some truth."

Paralympic triathlete Melissa Stockwell's voice is heard in the 60-second anthem spot, which includes clips of her swimming in the water off of Catalina Island. She is one of the athletes Chobani is sponsoring who spoke at the company's national sales conference, Mr. McGuinness said.

Speaking of sales, privately-held Chobani declined to share specific figures. However, the company is upbeat. Chobani cited Nielsen xAOC Scantrack data for the four weeks ended May 21 that showed its market share of overall yogurt hit 20%, the highest level in its history. According to the data cited by Chobani, the brand holds 36.7% of the overall Greek yogurt segment. 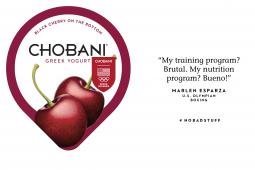 Chobani has a wide-reaching campaign. Soccer star Alex Morgan is set to appear in a 90-second integration on "Jimmy Kimmel Live" on July 26th. The company is also featuring quotes from its athletes on the underside of its yogurt lids. Lines include "How I train? Hard. How I eat? Simple." from wrestler Jordan Burroughs.

Along with the public marketing push, Chobani plans to serve its products in the NBC and Team USA house at the Rio Olympics.

Marketers might be hustling to deal with issues such as zika virus and safety concerns in Brazil, but Chobani has some familiarity with Olympics-related snafus. The company's yogurt, meant to be served to athletes in Sochi, got hung up in customs, recalled Mr. McGuinness, who said the products were instead donated to food banks.

Other Chobani videos in the campaign include a segment where boxer Marlen Esparza learns to prepare a lighter version of an alfredo sauce. Though Ms. Esparza, a bronze medal winner in 2012, is not set to be on the team this year, Chobani decided to keep her in the campaign.

"She's a wonderful ambassador of the brand," said Mr. McGuinness. "We love her, we believe in her, and we think she should have made it, frankly. We're just not going to be a fair weather friend and so we're going to stick with her and support her."

CORRECTION: An earlier version of this story incorrectly said that Chobani products would be served in the Olympic village Team USA facilities in the U.S. and at NBC's Olympics Games facilties in Rio. In actuality, they will only be available in the NBC and Team USA house.