A Series Could Underdeliver Women 18 to 49 But Overdeliver Soft-Drink Shoppers
READ THIS NEXT
NBCUniversal takes its upfront from Madison Ave to Main Street with '30 Rock' reunion
CBS's 'Blue Bloods'
Credit: Jojo Whilden/CBS

CBS is launching packaged-goods-specific ratings for the upcoming network upfronts, encouraging marketers in 20 categories to buy space based on how heavily audiences consume products rather than on traditional viewership measures. 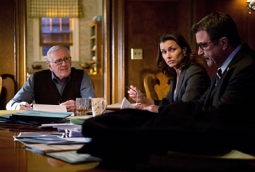 The strategy will help ad buyers see that even though "Blue Bloods," for example, fares relatively poorly with the traditional female 18-to-49-year-old demographic, it is among the best at delivering heavy buyers of nonalcoholic beverages.

"The programs will be ranked to look like a Nielsen rating," said David Poltrack, chief research officer at CBS Corp. "In terms of whether guarantees or negotiations are going to be based on that , that 's ultimately for the market to test ."

Purchase-based segments should prove more predictable than age-sex demographics, according to Mr. Poltrack, but it could be unwieldy to run an upfront market using a host of product-specific currencies.

For now, CBS will make the data available to help brands inform their choices -- and point out the value in some shows that traditional demos wouldn't suggest.

One brand nearly tripled its sales lift by focusing on soft-drink-intensive shows instead of buying against traditional demographics, Mr. Poltrack said in his presentation late Monday at the Advertising Research Foundation's Re:think conference in New York.

CPG-specific ratings will count all viewers but weigh them according to their category-purchase behavior. Not all advertisers want to target heavy buyers, Mr. Poltrack said. Research by the Ehrenberg-Bass Institute suggests that encouraging additional spending by light brand buyers is more productive than encouraging loyalists to buy even more.

Gayle Fuguitt, VP-consumer insights at General Mills, declined to say if her company will use the CPG ratings for buys, citing company policy against disclosing media plans. But she said General Mills has been collaborating with CBS for the past year as both used Nielsen Catalina data to help develop their segmentation systems.

For the dairy brand in the study, actual exposure to advertising on CBS shows among General Mills' eight consumer segments was fairly uniform when buys were made using traditional demographics. But sales response to the ads ranged widely. The ads produced no change among General Mills' "Health-Younger" segment but led to a strong increase for its "Family Foodies" segment.

The same pattern emerged for three other General Mills brands, Ms. Fuguitt said. That suggests General Mills could get considerably better impact by redirecting its media dollars based on its own consumer segments, not the demos.

The differences in sales lift among General Mills consumer segments were "greater than people anticipated," Mr. Poltrack said. And the overlap between key parts of the network's and the marketer's segmentation schemes also suggests that CBS's viewer segments, introduced last year, can work with marketers' segmentation systems to produce better results than age-sex demos.

General Mills found that one of its dairy brand's top-performing groups, "Convenience-Seekers," overlapped with CBS's "Program Passionates" group, which watches a lot of prime time, albeit only a narrow range of shows. "It was a little paradoxical that it's a convenience-food product, yet they're watching prime time," Ms. Fuguitt said, given the perception that convenience-seekers wouldn't sit in front of the TV at night, leisurely viewing full-length programs.

"Then it makes all the sense in the world," Ms. Fuguitt said, "because it's upscale women who are highly educated, don't have a lot of time, and are very precise and specific about how they want to spend their time."

Matching consumer purchase and viewership "is moving us to something much, much better in terms of consumer engagement" by helping viewers see commercials for things they like to buy, Ms. Fuguitt said. Mr. Poltrack said that should also help improve viewership and reduce tune-away or ad skipping.