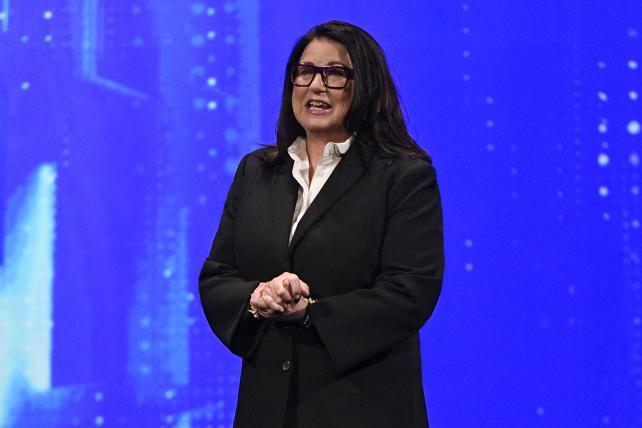 CBS Corp. CEO Leslie Moonves received a standing ovation when he took the stage at Carnegie Hall on Wednesday afternoon during the eye network's upfronts pitch to advertisers. It was a first, in at least recent memory, for a network exec to receive such a roaring round of applause.

While it wasn't clear who exactly was cheering—CBS employees or ad buyers—Moonves' reception represented a show of support amid a surprising and intense legal battle now unfolding between CBS and its controlling stakeholder, the Redstone family's National Amusements. CBS filed a lawsuit earlier this week to stop Shari Redstone from interfering in a planned meeting that could dilute National Amusements' voting interest in CBS. Redstone has been vocal in her desire for CBS to merge with Viacom, but CBS leadership has not been happy with the proposed details and seems curious about other options.

Moments before Moonves took the stage, a Delaware Chancery Court judge essentially issued a time-out on the battle and granted the restraining order CBS requested.

"So how's your week been?" Moonves said by way of an opening.

His speech was unusually muted and brief, absent the usual digs against rival networks. But Moonves still took the opportunity to tout CBS' dominance and laud the broadcast TV model.

And Jo Ann Ross, president and chief advertising revenue officer at CBS, chipped in on taking digs at competitors. She came on stage doing jazz hands—making fun of Fox's so-called Jaz pods, one-minute commercial breaks that feature "just a and z" spots, or the first and last ad units in a break.

She also asked the audience whether they were there to see her and what she is wearing, slyly alluding to the dress that designer Jason Wu made for Linda Yaccarino, NBC Universal's chairman of advertising and client partnerships, for the NBCU upfronts on Monday.

And she took a swipe at efforts by various network groups, including Fox and NBCU, to reduce commercial time on their airwaves.

"Unlike those focused on commercial loads, we do not believe advertising is ruining the TV business," Ross said.

CBS showed the first clips of the "Murphy Brown" reboot, which made more than a few references to President Trump.

"I want to extend a special welcome to my CBS family, our amazing advertising partners, our incredible affiliates, and, of course, any former members of the Trump administration who are looking for jobs at CBS," Colbert said. "A word of warning to Steve Bannon: The 'Amazing Race' is not about what you think it's about."

"One year ago," he added, "you had no excuse if your boss caught you Googling Stormy Daniels."

James Corden also made a brief appearance to pitch advertisers on a new show concept: "Young Corden"—"a whimsical tale of a classic song-and-dance kid" who overcomes bullying in grade school to fulfill his dream of hosting a late-night show. It's also a crime procedural that takes place in a hospital, Corden's pitch continued. A sexy hospital, that is.