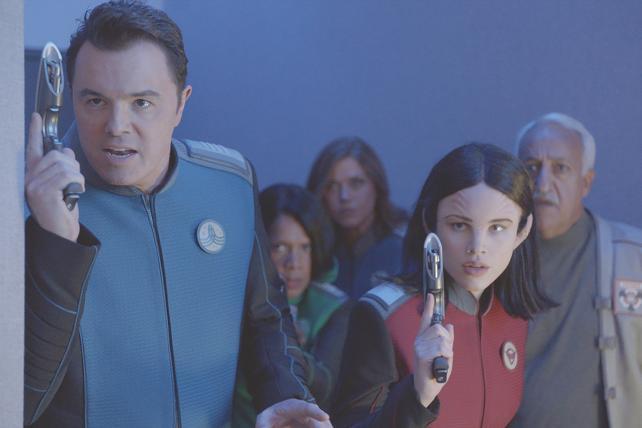 'The Orville,' one of Fox's three new shows this fall, is a comedic space romp from Seth MacFarlane.
Credit: FOX

As linear TV ratings continue their inexorable downward trajectory and the sheer metric tonnage of original scripted content threatens to blot out the sun, Fox is taking an uncharacteristically conservative approach to its broadcast schedule. A year after ordering 14 projects to series, Fox has picked up just six new shows for the entire 2017-18 campaign.

Only three freshman series are slated to join Fox's fall roster, where they will join returning hits such as "Empire," "Lethal Weapon" and the record-smashing institution that is "The Simpsons." According to Fox Television Group's co-chair and CEO Dana Walden, the network has brought back no fewer than 17 legacy series, the most in a decade.

Two of the new fall shows are dramas, and two additional genre exercises are scheduled to air in 2018.

A joint production between 20th Century Fox TV and Marvel TV, "The Gifted" is a family-friendly adventure -- thematically, there's a bit of a resemblance to the 2010 ABC strip "No Ordinary Family" -- that takes place in an X-Men-adjacent universe. Starring Stephen Moyer ("True Blood") and Natalie Alyn Lind ("Gotham"), "The Gifted" will lead out of "Lucifer" in the Monday 9 p.m. slot.

Fox hopes to pump more movie studio dollars back into Thursday nights with the Seth MacFarlane vehicle "The Orville," which will lead out of "Gotham" in the Thursday 9 p.m. slot. Jon Favreau directed the pilot episode of this live-action comedic space romp, which Walden characterized as "Seth's passion project." Fox is putting all of its promotional muscle behind "The Orville," launching it out of back-to-back NFL national windows (Seahawks-Packers, Sept. 10, and Cowboys-Broncos, Sept. 17) before it moves to its regular hour.

"The Orville" faces some not-inconsiderable opposition in its allotted time slot, going head-to-head with "Thursday Night Football," NBC's "This Is Us" and ABC's "Scandal." That said, the Venn diagram of Seth MacFarlane enthusiasts and fans of the aforementioned melodramas more likely than not looks like a deconstructed Oreo, so "The Orville" could very well build an audience of younger male viewers.

Also new for 2017 is the Craig Robinson-Adam Scott paranormal comedy "Ghosted," which will air out of "The Simpsons" in the Sunday 8:30 p.m. slot. This season, "The Simpsons" will surpass "Gunsmoke" as having produced the most episodes of scripted TV (635 half-hours).

New to midseason are the Ryan Murphy first-responder drama "9-1-1," starring Angela Bassett, and a warts-and-all look at the inner workings of a metropolitan hospital in "The Resident." Fox has been eager to reestablish its medical-drama bona fides since "House" ended its eight-season run in 2012.

Also in the works for midseason is the Adam McKay/Will Ferrell workplace comedy "LA to Vegas," which stars Dylan McDermott as the pilot of a cut-rate airline that specializes in transporting gamblers from La La Land to the neon wilderness of The Strip.

In keeping with the current push for vertical integration and multiple revenue streams, all six Fox newbies are in-house properties, meaning the network can cash in on resale to streaming platforms later.

Along with the upcoming scripted newbies, Fox is about to begin casting for its live productions of musical adaptation of the movie "A Christmas Story" and a bold made-for-TV restating of the Broadway hit "Rent."

Among the returning series that will make their way into the Fox midseason lineup are "The X-Files," which is back for a 10-episode arc that will pick up where the winter 2016 storyline left off, and the Zooey Deschanel comedy "New Girl," which will get a proper send-off in the spring.

While the decision to slate only a handful of new shows is partly a function of a weaker-than-usual development season, it also has become increasingly obvious that throwing hundreds of millions of dollars into new shows that can't out-rate the established series is an exercise in diminishing returns. The razor-thin margins are apparent in the live-same-day ratings: Per Nielsen, the shows Fox renewed for next season averaged a 1.2 rating in the target demo, which works out to 1.54 million adults 18 to 49. The average deliveries for the dozen series Fox canceled was a 0.7, which translates to a hair under 900,000 advertiser-coveted viewers.

"Corey [Hawkins] is on Broadway now in 'Six Degrees of Separation,' so his schedule wouldn't allow us to consider [bringing '24' back this season], although it's still very much in the mix," Walden said.

The new season will also see Fox compete against "American Idol," a former monster hit for the network that Freemantle is reviving for ABC.

Walden acknowledged that while "it feels bad knowing that 'American Idol' is coming back on another network," she said the network and the production company ultimately didn't agree on the particulars of an 'Idol' revision. "You know, it's obviously a tough one," Walden said. "But it felt to us like it would be extremely fraudulent to bring the show back quickly" so soon after Fox had invested so much promotional capital in the 2016 farewell season.

"It was too early to bring the show back, and all our research and fan forums supported that," Walden said. "We did make an offer; Fremantle definitely was not interested. Ultimately that fell apart."

Fox will present its 2017-18 schedule to media buyers and advertisers today at 4 p.m. at the Beacon Theatre.