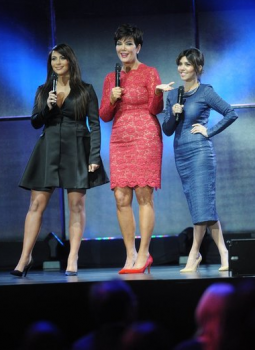 E! Network is increasing its original hours in prime-time and reducing repeats, executives said on Monday as they made their case to advertisers ahead of the annual upfront bargaining season.

Hosted by Ryan Seacrest, with appearances by network stars like the Kardashian clan, Chelsea Handler, Joe Jonas and Ryan Lochte, E! worked to position the network as a three-screen leader that attracts trendsetters.

"Poptimize your brand and optimize your reach," Mr. Seacrest told the room of media buyers and their clients.

Scripted series pushed back: E! previously said it would have at least two scripted projects on the air this year, using last year's upfront pitch to describe shows in development including "Dorothy," a modern-day spin on "The Wizard of Oz," and "Amy Devlin Mysteries," a cop procedural. E! now plans to introduce its first scripted series by 2014. Mr. Seacrest said it will shoot three pilots this summer.

The Wanted and WWE: New unscripted fare includes a series about the lives of the U.K. pop group The Wanted; "Total Divas," about the women of WWE; and "Love and Other Contact Sports: Eric and Jess," about the road to marriage for country/pop singer Jessie James and NFL wide receiver Eric Decker. E! will also introduce "The Trend" and "Pop Innovators," about pop culture, and "Hello Ross," an interactive talk show.

Joke's on Ryan (Lochte, not Seacrest): Olympian Ryan Lochte, whose new reality series "What Would Ryan Lochte Do?" began Sunday, was the butt of everyone's jokes -- including for his catchphrase "jeah."

Check out our TV upfront calendar for the next events on the schedule.