Hallmark Channel wants to use its position as one of the few established independent networks to its advantage during upcoming upfront negotiations for ad time in the new TV season.

"Because we are not part of the big guys we don't get the credit we deserve," said Bill Abbott, president and CEO at Hallmark parent Crown Media, during a press luncheon on Thursday foreshadowing its upfront pitch to advertisers. "We are under-the-radar because we are independent and not part of one of the media conglomerates." 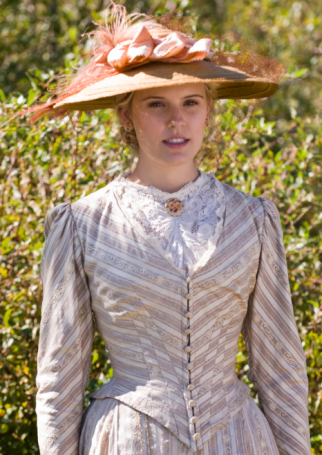 Hallmark said it has approved a series to follow its 'When Calls the Heart' TV movie.

Crown Media's only TV networks are Hallmark Channel and Hallmark Movie Channel, a contrast to the vast portfolios of channels owned by powers such as Viacom and NBC Universal. Family-friendly Hallmark is arguing that its independence allows it to be flexible and act quickly.

Buying commercial time on channels owned by conglomerates often incurs pressure to buy on sibling channels too, said Ed Georger, exec VP-advertising sales. Advertising on Hallmark involves less red tape, he said, but first the channel has to make sure it stands out.

To build bigger audiences and lure more advertisers, Hallmark Channel is making a commitment to original, scripted, prime-time series, with plans to have four originals on air by 2014. The first, adaptating Debbie Macomber's "Cedar Cove" books, will premiere on July 20. Another, "When Calls the Heart," will follow an October TV movie with 10 episodes starting in January.

The network's entrance into scripted series opens it up to new categories of advertisers, including technology, financial services and automotive, Mr. Abbott said, predicting a 20% increase in ad sales volume during the upfronts.

During the holiday season, the premiere of its 12 original movies made it the No. 1 cable network in weekend prime-time among women 25-54. "The Wishing Tree" was Hallmark's highest-rated original movie of the year, attracting nearly 3.9 million total viewers in its mid-November premiere. Hallmark Channel will air 50 original movies in 2014 compared with the 27 it aired in 2010.

Hallmark Channel has made several program acquisitions in recent months, including syndicated reruns of "The Good Wife" starting next January, and struck a deal with Meredith for its syndicated daytime program "The Better Show." The network also introduced "Walden Family Theater" last week, a Friday night family movie sponsored by Walmart and Procter & Gamble.

Hallmark has renewed "Home & Family," its two-hour daytime program, for a second season, executive said today. The network is talking up the show as an opportunity for advertisers to create meaningful integrations, even having the hosts, Mark Steines and Cristina Ferrare, on hand via satellite to answer questions.

Hallmark revamped its afternoon block last fall after it chose not to renew its contract with Martha Stewart. At the time, it also brought in Marie Osmond to host her own talk show, but it did not provide an update on the renewal of "Marie," saying it is still evaluating the show. The daytime slot has seen a 6% to 10% ratings bump year-to-date, the network said previously.