IFC Wants Advertisers to Cozy Up to Its 'Responsible Rebels' 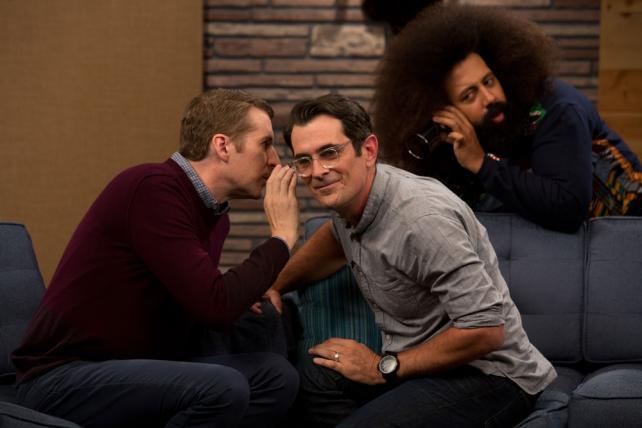 In a bid to make its hipper-than-thou brand pop during the annual barrage of TV upfront spiels, IFC this spring is pitching a newly hatched psychographic to media agencies and clients. Per the sizzle reel that opens IFC's agency presentation, the "Responsible Rebels" who make up its target audience earned the adjective because "they have good jobs, they pay the bills and they don't stink!"

"Sure, they still have beards and wear grampa hats and they take ironic things with them on their trips to Portland ... but they're not Hipsters. They're Responsible Rebels!" Fafa said, before going on to note that, unlike the 36-year-old steampunk enthusiast tooling around Fort Greene on his unicycle, the IFC audience isn't a complete caricature of itself. "They are not sheep. Responsible Rebels don't wait around for cool stuff! They go find it! They're successful, they're discerning and they like the good stuff!"

While IFC first began running 30-second spots back in late 2010, the network has retained some elements of its old sponsorship model. Back in the day, a single client like Heineken or Target would effectively own a given night of prime time, sponsoring an entire uninterrupted programming block. Today, IFC boasts a relatively high concentration of branded entertainment opportunities, a catch-all that includes integrations, pod-busters and fourth-wall-shattering call-outs for sponsors within its scripted content.

The network generally lets the form dictate the branded entertainment content. For example, the meta-joke that informs the upcoming faux-doc series "American Documentary" is that the show has been on the air since the Nixon administration. "We're actually treating this as a long-running doc series in its 45th season, and we're going to continue the joke in and out of the break with PBS-style pledge drives, sponsor thank-yous and callouts for the partners that are along for the ride," said Vanessa Benfield, senipr VP-advertising sales, IFC.

Starring "Saturday Night Live" alumni Bill Hader, Fred Armisen and Seth Myers, "American Documentary" premieres this summer. In a taped pitch to buyers, Mr. Armisen promises that the show is going to come in so under-budget that the producers will "give back that money to IFC, who can then redistribute it to advertisers."

Mr. Hader countered by a more reality-based assessment of the show's finances. "We've already spent some money that you haven't spent, and actually -- and this is really important -- we haven't said no to more of it," he joked.

Also new for 2015 are the scripted Denis Leary hockey comedy, "Benders," which bows this fall, and the semi-scripted "Gigi's Bucket List," which is on track for a fourth quarter debut.

Starring actor David Krumholtz of "Numbers" fame as a Bubbe from Boca, "Gigi's Bucket List" follows a newly widowed woman of a certain age as she attempts to burn through the $3.2 million left to her by her late husband. As Ms. Benfield notes, the structure of the show allows IFC to place its partners' products into Gigi's bucket list. "So, she needs a new car, she wants to upgrade to a new cell phone, there's all kinds of things that we can do with that," she said. "There's a lot of fun we can have with the show and it's a great place for brand integrations."

Returning shows include "Maron," which on May 14 embarks upon out its third season of kvetching angst; "Portlandia," which in the first quarter of 2016 bows its sixth season with some help from backers like Subaru, Geico and Zillow; and David Cross's "The Increasingly Poor Decisions of Todd Margaret," which will be resurrected for a third season more than three years after the titular character blew up the world in the finale.

The show's signature soufflé of what may perhaps be best described as "deadpan, whimsical smartassery" extends to its client integrations. In a characteristic bit a few years back, Mr. Aukerman and his erstwhile sidekick Reggie Watts motor around in a sporty Volkswagen while debating the notion of "selling out." Mr. Watts accuses the driver of "putting the sponsor first and comedy second"; moments after Mr. Aukerman renounces product placement, the car crashes into a giant VW logo that has materialized from out of nowhere.

"Many brands are looking to either position themselves in the comedy space or don't know quite how to do it, so we help them find the funny in what they do," said Kim Granito, VP-integrated marketing, IFC. "And we have the talent to back that up. You look at these shows and it's really the biggest names in entertainment. And they want to come to play in this space simply because ... they get to flex a creative muscle that they don't get to do in network sitcoms."

Clients can also buy integrations in IFC's online shorts, a collection of original digital offerings featuring the talents of "SNL" cast members Vanessa Bayer and Kate McKinnon, as well as a stable of talent from the Upright Citizens Brigade. In the early going, QSR brands appear to be particularly well represented within the context of these new shorts.

While decidedly a niche brand -- IFC in 2014 averaged 195,000 total prime time viewers, making it the 66th most-watched ad-supported cable network -- the network enjoyed year-over-year growth of 19% in a period in which overall cable ratings dropped 10%.

"IFC just had our best year ever, which means more viewers and more valuable Responsible Rebels for your brand," said Ms. Benfield. "And we've really upped our game in terms of quality comedy all year round. Together, all that adds up to more opportunities for our partners' brands to stand out."