Movies, Toys Expected to Boost Upfronts
READ THIS NEXT
NBCUniversal takes its upfront from Madison Ave to Main Street with '30 Rock' reunion 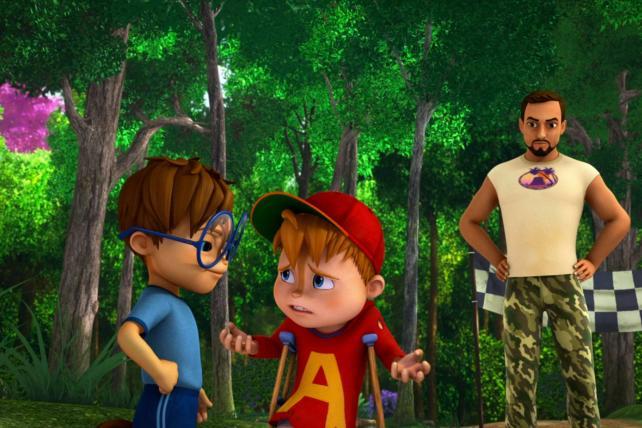 Nickelodeon's series 'Alvinnn!!!,' a new take on 'Alvin and the Chipmunks,' has helped the channel's ratings.
Credit: Nickelodeon

When the big three kids' TV programmers make their upfront pitches to media buyers and advertisers in the coming weeks, the focus will be less on one or two high-profile series and more on introducing opportunities for marketers to be part of immersive experiences across screens.

Adapting to the way their audiences are consuming content, Disney Channel, Cartoon Network and Nickelodeon are less and less creating shows or characters for TV first. They are thinking about building worlds that have a presence on mobile devices as well as linear TV and inventing interesting ways for audiences to interact with this content.

It's become a necessity for children's brands because young viewers have only lived in a world where content can be accessed any time, anywhere. And for the most part, kids don't care if they watch content live or on-demand.

Disney Channel announced this week that it is abandoning the traditional programming model, where content is created for TV and then rolled out on other platforms. Instead, it is making new episodes of series available on all platforms the same day they premiere on linear networks. Previously, shows were not available on video-on-demand or the Watch Disney apps until the day after they aired on TV. The change takes effect this week.

"Now from the inception we are thinking about the impact of each channel and looking at delivery overall," said Rita Ferro, exec VP-Disney Media Sales and Marketing.

While compelling content and characters are perhaps even more important in this environment, Disney plans to spend more time telling ad buyers about the ways it reaches specific audiences, which it divides into four buckets: moms of preschoolers, kids, tweens and millennials.

Turner's Cartoon Network is also developing characters and storylines outside of the confines of linear TV and then thinking about how they will live on each platform.

The approach is echoed in the way Cartoon Network is working with advertisers.

"Our partners want to build ideas and then find the media to support it, instead of planning the media and fitting the campaign in that," said Joe Hogan, exec VP-portfolio sales and client partnerships, Turner Ad Sales.

Overall, sales executives at the three big children's networks expect to ride the momentum of a strong scatter market into the upfront -- when TV networks look to sell a bulk of their commercial time for the fall season and the kids networks typically haggle over an estimated $800 million up for grabs.

Movie studios and toy companies, in particular, are poised to drive sales at the networks, with executives pointing to a robust pipeline for both categories.

"There was excitement coming out of the toy fair," Ms. Ferro said.

In 2015, U.S. toy sales increased nearly 7% to 19.4 billion, according to The NPD Group, the biggest growth in more than a decade.

Movie studios also have more films geared toward kids in the coming year than they have had in many years, Mr. Lucas said.

The kids' networks themselves are entering the 2016 upfront showing some signs of stability.

In an analysis of viewing in the fourth quarter of 2015 released last month, Sanford C. Bernstein analyst Todd Juenger noted a significant deceleration in the rate of declines of the live-plus-same-day audience of the kids channels.

The group was down 2% in the fourth quarter in total day, an improvement from a decline of 8% in the previous quarter. And commercial viewing in the three days after a program airs, or C3, showed modest growth of 2%.

"The reason C3 is better than live plus same day is explained by the fact that time-shifted viewing continues to grow, and kids tend not to fast-forward ads," Mr. Juenger wrote in a research note.

Nickelodeon's series "Alvinnn!!!," a new take on "Alvin and the Chipmunks," has helped buoy the channel, Mr. Juenger noted.

And in the first quarter, Nickelodeon has posted 4% growth in viewers between the ages of 2 and 11, Viacom's Mr. Lucas said.

Cartoon Network has been steadily catching up to Nickelodeon and Disney after spending years as a distant third. In the fourth quarter, Cartoon was the only kids network to grow its total-day audience.

Cartoon's Mr. Hogan said the network has made meaningful gains in attracting a larger girls' audience, after years of being heavily skewed towards boys ages 6 to 11. That reflects efforts to take a more humorous tone at the channel, he said.

The network is also No. 1 in video-on-demand starts among all cable networks, according to Rentrak.

Disney Channel's Disney Junior posted its highest ratings in a year last month with a new episode of "Sophia the First" featuring Olaf, the snowman from "Frozen." The episode was watched by 3.3 million total viewers.

While the focus during upfront presentations may be on cross-screen opportunities and understanding audiences, there will still be some sexy TV stories.

Nickelodeon is continuing to unearth its archives and revive some of its classic shows.

It's turning the '90s game show "Legends of the Hidden Temple" into a live-action TV movie. The series will draw from the show's premise of kids competing to retrieve artifacts from a mysterious Myan temple.

And Disney Channel has started casting for the next iteration of its wildly successful "High School Musical" franchise.

Disney will introduce 17 new series to the marketplace when its meets with media buyers and marketers this week and next week in Disneyland and Walt Disney World.