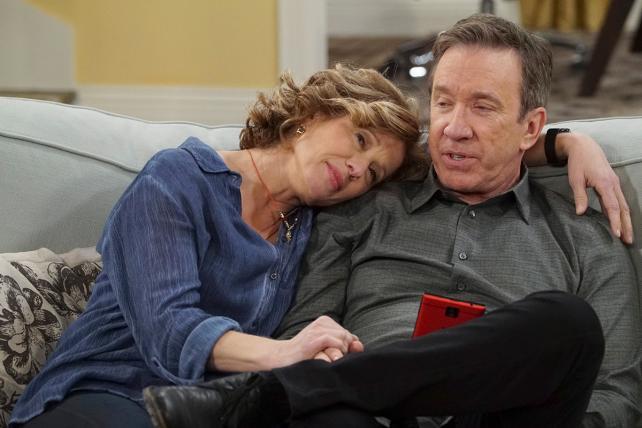 Fox is bringing back the Tim Allen comedy "Last Man Standing" next season.

The sitcom, which stars Allen as a man trying to maintain his manliness as a father of three girls, was canceled by ABC last year following its sixth season.

At Fox, it's expected "Last Man Standing" will fill one of the holes left on Sunday nights following the cancellation of the comedies "Last Man On Earth" and fan-favorite "Brooklyn Nine-Nine." Fox also canceled the comedy "The Mick."

If it does end up slotted on Sunday nights, "Last Man Standing" will likely air with a rejiggered ad format. Fox is looking to cut about 40 percent of the ad time on Sunday nights, which is also home to animated comedies "The Simpsons" and "Family Guy." It is out selling JAZ pods, or "just a and z pods," which are one-minute commercial breaks with just two spots.

In its final season on ABC, "Last Man Standing" averaged 6.4 million viewers and a 1.2 rating in the core 18-49 demographic. That grew to 1.4 in the three days after the program aired, an industry standard known as C3. This made it ABC's second most-watched comedy behind "Modern Family" at the time.

"Team LMS was in the sixth inning, ahead by four runs, stands were packed and then for no reason, they call off the game. It leaves you sitting in the dugout, holding a bat and puzzled," Allen said in a statement. "Now we get the news from Fox that it's time to get back out on that diamond – hell yes, I'm excited! When I heard the offer to create more episodes of 'Last Man Standing,' I did a fist pump so hard I threw my back out. It's the fans! I could not be more grateful for the fans who wrote petitions and kept up the passion and incredible support for the show…I'm sure audiences will be curious to see what we look like after all these years. Oh, has it only been one year? Well, just goes to show you – a lot can happen in a year."

ABC received plenty of backlash when it pulled the plug on "Last Man Standing," with critics contending the decision had to do with Allen's conservative politics and the right-leaning views of the show. But during the Television Critics Association press tour, ABC entertainment president Channing Dungey said it had nothing to do with politics.

The decision to bring it back also comes following the massive success of ABC's "Roseanne" reboot. The show, whose namesake is a Donald Trump supporter, returned in March to more than 18 million viewers in live-plus-same-day viewing.