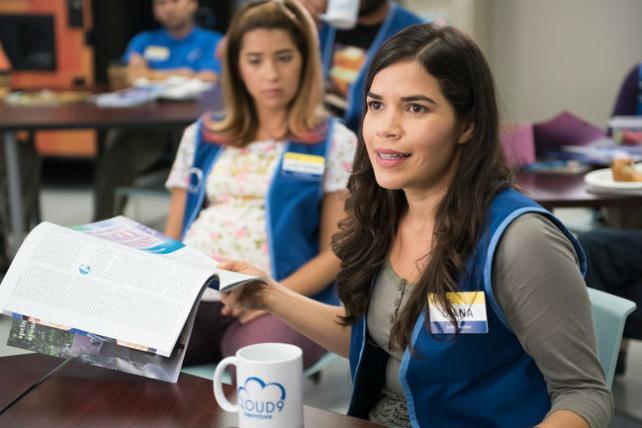 NBC will try to draw viewers to the returning comedy 'Superstore' with a new episode during the Rio Olympics.
Credit: NBC

NBC is bringing comedy back to Thursday nights.

After a season of only dramas on Thursdays, where it once ran powerhouse sitcoms like "Friends" and "Seinfeld," the peacock network will air the second season of "Superstore" at 8 p.m. followed by new comedy "The Good Place" at 8:30 p.m.

"The Good Place," following an ordinary woman who mistakenly finds herself in the afterlife, stars Kristen Bell and Ted Danson.

"Chicago Med" and "The Blacklist" will round out the night.

It will try to give "Superstore" a lift with a new episode during its coverage of the Rio Olympics in August.

"The Blacklist" is moving an hour later on Thursdays to give it a strong lead-in, something it lacked this season, Mr. Greenblatt said. (It followed the ill-fated "Heroes Reborn" to start the 2015-16 campaign.)

NBC is touting its stability to advertisers. "There's very little upheaval. This is the first time in a long time we are not running around and throwing shows up against a wall," Mr. Greenblatt said.

The peacock network has five sophomore series for the 2016-17 season and is introducing just three new series to the fall lineup, which Mr. Greenblatt said is "unprecedented."

NBC is on track to end the current season in second place to CBS among total viewers, averaging 8.2 million viewers, down 6%. It's worth noting that CBS this year aired the Super Bowl, which moves to Fox in 2017.

There is still a chance NBC can best CBS in the all-important 18-to-49 demographic: NBC is averaging 2.7 million viewers in the demo, while CBS is averaging 2.9 million.

Other new comedies include "Great News," produced by Tina Fey and Robert Carlock, which follows a young TV producer who finds out her mom has accepted an internship at her job; "Powerless," set in the DC Comics universe and starring Vanessa Hudgens as a "heroic" insurance adjuster specializing in coverage against damage cause by super heroes' battles; "Trial & Error," a mockumentary about a bright-eyed New York lawyer who arrives in a quirky small Southern town to defend a professor (John Lithgow) who is accused of murdering his wife; and "Marlon," inspired by the real life of Marlon Wayans.

NBC's new dramas this fall are "This Is Us," "where seemingly disparate people's lives intersect in the most curious ways," the network said; and "Timeless," which features a scientist, soldier and history professor who must change the past while trying to capture a dangerous fugitive. Both will follow "The Voice": "Timeless" on Mondays and "This Is Us" on Tuesdays.

Mr. Greenblatt said the network is especially excited about "Timeless," which he said has a broad appeal and is a "high-octane, fun" series.

"The Voice" is entering its 11th season with new coaches Miley Cyrus and Alicia Keys.

The network is placing less of an emphasis on the fall as the place to launch new series.

"Fall is obviously still important, but increasingly so, midseason and summer are as important as the fall," Mr. Greenblatt.

Other mid-season drama freshman include a "Blacklist" spin-off called "The Blacklist: Redemption"; a "Wizard of Oz" re-imagining called "Emerald City"; "Midnight, Texas," based on the book series from Charlaine Harris about a small town full of vampires, witches, psychics and hit men; and "Taken," a prequel to the Liam Neeson movies by the same name that turns the lead role over to "Vikings" alum Clive Standen. It will air at 10 p.m. on Mondays.

While NBC may not be totally upending its schedule, it still canceled 10 shows this season, including "Mysteries of Laura," "Undateable," "Heartbeat," "Game of Silence," "Telenovela" and "Crowded."

After Mr. Greenblatt's call on Sunday, the network said it had renewed the comedy "The Carmichael Show" for 13 episodes.

Coming out of the Olympics, NBC will introduce the unscripted series "Better Late Than Never," which follows Henry Winkler, William Shatner, Terry Bradshaw and George Foreman as they travel across Asia.

Other reality series include "The Wall," a game show from executive producer LeBron James and hosted by Chris Hardwick, and "First Dates," from Ellen DeGeneres and Drew Barrymore.

NBC Universal will host a combined upfront presentation on Monday for its flagship broadcast network, its suite of cable channels such as USA Network and Bravo, and its Spanish-language broadcast network Telemundo.