On the Eve of the 2016-17 Bazaar, Smaller Events Allow for Bigger Conversations
READ THIS NEXT
Disney sees more than 40% of upfront ad commitments go to streaming 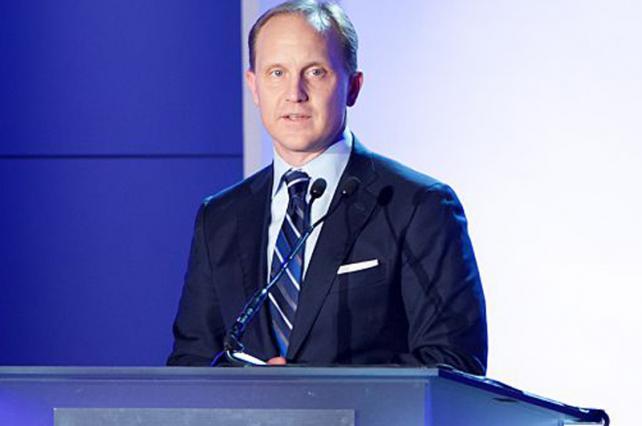 The tour, which touched down last week in San Francisco, Dallas, Seattle, Chicago, Detroit and Atlanta, marked only the second time Fox Sports has hosted standalone upfront presentations. (The Fox broadcast network each May devotes a brief window to sports during its rigorously choreographed dog and pony show at the Beacon Theatre.) In March 2013, the sports group held its first official autonomous upfront event in the ballroom of New York's Marriott Marquis, where it unveiled the new 24/7 cable network, FS1.

According to Eric Shanks, who serves as President and COO of Fox Sports, each of the six presentations was anchored by a clutch of Hall of Famers and on-air talent. In Chicago, former White Sox slugger Frank "The Big Hurt" Thomas gave a Windy City Baseball State of the Union Address to a contingent of buyers from Starcom and reps from MillerCoors, while clients in Atlanta were greeted by legendary Braves closer (and Joe Buck's new broadcast partner) John Smoltz.

After the old pros warmed up their respective rooms, Mr. Shanks and Fox ad sales execs went on to give what amounted to a series of 45-minute chalk talk, overviews that included insights into rapidly evolving consumer behaviors and a reminder that Fox over the course of the next four years will play host to some of the biggest sporting events on the calendar. These include Super Bowl LI in February 2017, the 2018 FIFA Men's World Cup, the 2019 FIFA Women's World Cup and Super Bowl LIV in February 2020.

"Just as consumer consumption is changing across the sports and entertainment landscape, so is the upfront process changing," Mr. Shanks said. "Our clients, our sponsors, want a deeper relationship. They want true customer solutions. So rather than put on a big show, which doesn't really allow you to foster those one-to-one conversations where you can discuss peoples' individual needs, we wanted to host these smaller gatherings."

Each event was attended by anywhere from 30 to 40 agency execs and clients, many of whom were particularly interested in talking up soccer. "In just the last few years, the conversation around soccer has really evolved," Mr. Shanks said. "Even since just last summer, when we had the Women's World Cup, the amount of discussion from the client side is pretty amazing."

Indeed, Fox's first stint as a World Cup broadcaster was a huge draw for advertisers looking to connect with the hordes of younger-skewing viewers who tuned in for the tournament. Fox lined up around 50 advertisers in and around its 50-match schedule on its broadcast and cable networks, a roster that included brands like Audi, Nationwide, Sprint, Nike, Budweiser and Paramount Pictures. In the process, Fox generated some $40 million in ad revenue, more than doubling its original forecast.

With the world's most elite male players set to take the pitch in Russia next summer, the stakes will be even higher. Because the 2018 FIFA World Cup marks its first shot at broadcasting the men's tourney, Fox isn't making any early sales projections, but if recent history is anything to go by, the grass at Moscow's Luzhniki Stadium won't be the only green on the agenda. When ESPN last hosted the event back in 2014, it generated more than a half-billion dollars ($529 million) in sales.

According to Mr. Shanks, over the course of the soccer-centric month -- the tourney, which kicks off on June 14, 2018, will culminate in the July 15 Final -- Fox will air 16 daily hours of World Cup programming across its networks. In a bid to make the most of certain corporate synergies, Fox will partner with sibling National Geographic to create content about the 32 countries represented in the quadrennial contest. "We see this as a cultural story, not just a sporting event," he said, adding that the video content would run across Fox's various TV and digital properties.

As far as the American version of football is concerned, the Super Bowl obviously is going to be the singular event of the 2016-17 TV season. (NBC's coverage of the 2016 Summer Olympics will take place during the interval between the end of the official 35-week 2015-16 broadcast schedule and the beginning of the fall season.) While Fox technically hasn't begun shopping any 30-second ad units in the big game, many NFL partners already have committed to a Super Sunday buy per the terms of their multiyear contracts,

"Those clients that locked in multiyear deals have already placed their stake in the ground. Now the conversation is, 'what do you want to do with that opportunity?'" Mr. Shanks said. "But no, the general [Super Bowl] market, that hasn't started yet."

Per Kantar Media estimates, Fox's 2014 broadcast of Super Bowl XLVIII generated $332 million in ad sales revenue, on an average unit cost of $4 million per 30-second spot. If the intervening years are anything to go by, Fox likely will set its going rate for time in Super Bowl LI at north of $5.2 million a pop.

Along with serving as a hype man for Fox Sports' upcoming big-ticket events, Mr. Shanks also used the upfront meetings as a forum to discuss the steady migration of eyeballs from traditional TV to digital platforms.

While live sports remains the closest thing to a "must-buy" for national advertisers looking for big reach and greater commercial deliveries -- last season, Fox's "America's Game of the Week" window remained the most-watched, highest-rated NFL package, drawing 27.4 million viewers and a 15.7 household rating, up 3% and 1%, respectively, versus the 2014 campaign -- scores and highlights packages aren't holding up nearly as well.

But as Mr. Shanks told his upfront guests, fans aren't so much rejecting highlights outright as they are consuming them on other platforms. Therefore, it is incumbent upon the programmer to take a more active role in getting its content on the platforms that play an outsized role in consumers' media diets. "About 89% of digital time is spent in apps, and half of that time is spent in one favorite app, be it Facebook or Twitter or Snapchat," he said. "If you're not embracing those top apps, you're missing out."