Slim pickings: Aside from a new NFL package, Fox's fall schedule is light on fresh fare 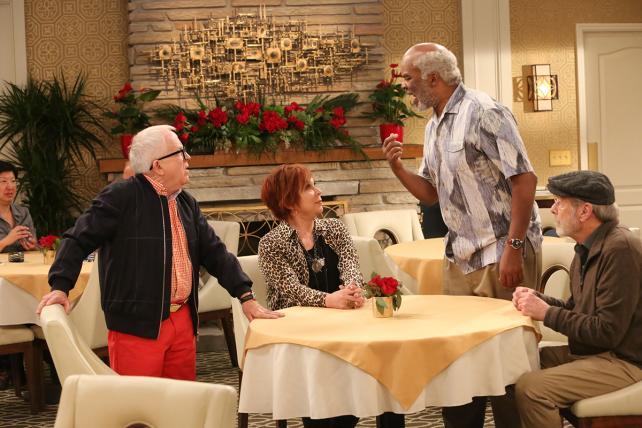 Leslie Jordan, Vicki Lawrence, David Alan Grier and Martin Mull in 'The Cool Kids,' premiering Fridays at 8:30 p.m. this fall on Fox. It's part of a very thin slate of new programming for the network.
Credit: Patrick McElhenney/FOX

Having ordered a mere handful of new scripted series for the upcoming broadcast season, Fox on Monday morning unveiled a fall schedule that somehow manages to preserve the status quo while offering a preview of how the network may function in the wake of Disney's proposed deal to buy most of Fox's sibling cable networks and production companies.

Setting aside the reclamation project that is Tim Allen's "Last Man Standing," Fox's fall roster appears to sacrifice novelty on the altar of prudence. In what represents the network's most conservative upfront slate in memory, the fall schedule features a pair of new multi-camera comedies and 11 primetime NFL games. And that's it as far as the new stuff is concerned. Anyone looking to sample a new Fox drama series will have to wait until midseason, as the six hours the network has set aside for its long-from programming have been claimed by returning series.

The centerpiece of Fox's fall schedule is "Thursday Night Football," which in shifting from the joint custody of CBS and NBC has done away with low-impact pairings (Jets-Bills, anyone?) in favor of premiere matchups like Packers-Seahawks and Saints-Cowboys. Not only will the addition of 11 NFL broadcasts boost Fox's ad sales revenue, but football promises to be a far bigger draw than the four shows that aired on fall Thursdays in 2017. (Per Nielsen, "Gotham" and "The Orville" last fall eked out a 1.0 live-same-day rating among the adults 18-to-49 demo.)

Calling the games will be Fox's lead NFL battery, Joe Buck and Troy Aikman. Fox Sports President and Chief Operating Officer Eric Shanks this morning confirmed that Buck and Aikman would handle the booth duties for the new "Thursday night Football" package, and will continue to call the Sunday afternoon "America's Game of the Week" showcase.

While sending Buck and Aikman into the Thursday night fray more or less echoes what NBC and CBS did over the course of their stewardship of "TNF," Buck's fall schedule will likely prevent him from calling at least one October game. As things currently stand, the broadcaster is on the hook to call Game 2 of the 2018 World Series in one city on Oct. 24, whereupon he'll fly to Houston for the following night's Dolphins-Texans NFL matchup, before jetting to a third city, where he'll call Game 3 of the Fall Classic. Nobody loves their job that much.

Along with all the eyeballs and ad dollars "Thursday night Football" is expected to scare up, Fox execs are hoping that the beefed-up NFL audience carries over into its Friday night lineup. And to their way of thinking, the show that might best capitalize on the promotional might of the NFL is the revitalized "Last Man Standing."

"We think ['Last Man Standing'] is a funny show and the audience really responded to it," said Gary Newman, Fox Television Group's co-chairman and CEO. "We thought there was an opportunity there for us, particularly after adding Thursday night football."

Fox TV's other co-chair and CEO, Dana Walden, went on to add that picking up the canceled ABC comedy wasn't an indication that Fox was undergoing a "tonal shift." A multi-camera production, "Last Man Standing" is a far broader, more traditional sitcom than the single-cams ("New Girl," "Brooklyn Nine-Nine") that have long been the network's bread and butter, but as Walden noted, the decision to revive Allen's Fox-produced show was a strategic matter.

"It didn't seem like a smart move to have highly-serialized comedies on Friday that would have been a barrier to entry for a lot of new viewers," Walden said, noting that many "Last Man Standing" viewers who may be sampling Fox's entertainment programming for the first time, thanks to the promotional onslaught in the previous night's NFL game.

The episodic "Brooklyn Nine-Nine" is a prime example of the "highly-serialized" comedy series that no longer seems an ideal fit for the in-transition Fox. The ensemble comedy's cancellation and subsequent absorption by NBC had all of Twitter aflutter over the weekend, as fans of the show were led to believe that their advocacy saved it from extinction. (NBC's Bob Greenblatt begs to differ with that interpretation of events.)

"We love ['Brooklyn'], those are great creators, it's a phenomenal cast," Walden said, when asked about the decision to cancel the show. "We ordered it throughout five seasons, which is a great length of time for a single-camera comedy. … Ultimately, we decided we just didn't have room for it, and we're really happy it's found a new home."

Newman and Walden were further pressed on the "Last Man" pick-up, as TV scribblers peppered the duo with queries about Tim Allen's political views and whether the success of ABC's "Roseanne" revival had colored their thoughts on bringing "Last Man" to the Fox lineup.

"We've been in business with Tim for five years, and his personal politics really aren't a big feature of the show," Newman said. "I think that if you were to talk to Tim and our showrunners they would say [Allen's character] Mike Baxter is a centrist, he doesn't have extreme political views. We just think it's a really funny show that the audience responded to."

As for whether or not "Roseanne" was a catalyst for revisiting "Last Man," yes and no. "Obviously, I think everyone took a good hard look at the performance of 'Roseanne,'" Walden said. "It did so well and it certainly did remind us that we have a huge iconic comedy star in our Fox family in Tim Allen."

Walden went on to note that Fox had been thinking of reviving "Last Man" well before "Roseanne" bowed to its huge opening numbers. "We tried to move 'Last Man Standing' over last year when ABC decided not to move forward," she said. "It's a really funny show. It had nothing to do with 'Roseanne' that we were interested in the first place. We always felt like ABC didn't really prioritize 'Last Man Standing.' We always wondered how it would do if it were given a better opportunity and prioritized more in terms of a network's agenda.

"We were emboldened by 'Roseanne.'"

Leading out of "Last Man" on Fridays is the Charlie Day ("It's Always Sunny in Philadelphia") multi-cam "The Cool Kids." Set in a retirement community (but, but, the demo!), "The Cool Kids" stars TV veterans Vicki Lawrence, Martin Mull, David Alan Grier and Leslie Jordan.

The shift to a multi-cam comedy Friday roster puts an end to Fox's Tuesday night single-cam comedy block, which just a few years ago battled similar efforts on NBC and ABC. NBC ditched out of the Tuesday comedy space at the end of the 2016-17 broadcast season, while ABC's diverse, family-oriented Tuesday night block was supercharged this spring by the return of "Roseanne."

Fox's other new comedy, "Rel," will air in the Sunday 9:30 p.m. slot newly vacated by the canceled "The Last Man on Earth." In a long-overdue move, "Bob's Burgers" will shift to the 8:30 p.m. time slot, where it will likely benefit from a "Simpsons" lead-in.

Midseason dramas include the Mark-Paul Gosselaar vehicle "The Passage," an apocalypse thriller written and executive-produced by Liz Heldens ("Friday Night Lights") and executive-produced by Ridley Scott. Also slated for the post-NFL portion of the season is the legal drama "Proven Innocent," which stars Rachelle Lefevre ("Under the Dome") and Vincent Kartheiser (Peter Campbell from "Mad Men").

The Fox TV execs also confirmed that "The X-Files" was unlikely to return in any capacity—the eleventh season of the revived supernatural drama drew just 3.74 million viewers and a 1.0 rating in Fox's target demo—and that additional seasons of "24" and "Prison Break" are in the very early stages of development.

"We're just focusing on getting the next iteration right," Walden said, speaking of "Prison Break." "I don't anticipate that there would be any significant announcements for several months." Meanwhile, Walden said that "24" showrunner Howard Gordon and co-creators Joel Sunrow and Robert Cochran are currently "ideating about where that show will live next," before adding that it is far too early to make a call on a revival.

Before ending this morning's call, Newman said that new and returning Fox series faced a "pretty high bar to get on our schedule this year." According to Nielsen live-same-day data, the average rating for the 14 shows Fox renewed was a 1.2 in the demo. Four years ago, the average for a renewed Fox show was a 2.0.