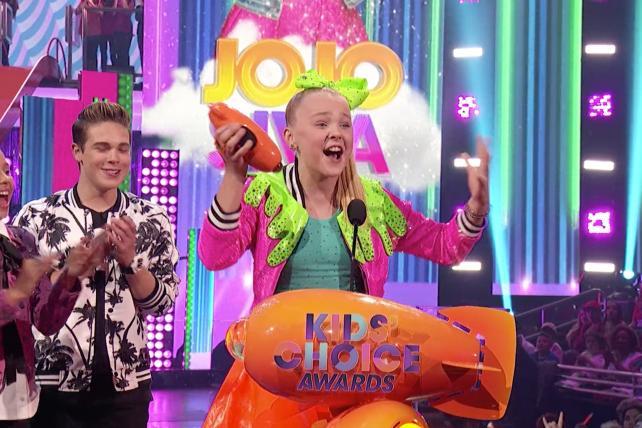 JoJo Siwa, a teen star on YouTube and Nickelodeon, at the 2017 Kids Choice Awards. She will undoubtedly be a presence in pitches to advertisers this year.

Next week, TV behemoths will unveil their new slate of programming and try to woo advertisers with their growing ability to more precisely target audiences, the better to resemble digital rivals, while touting their premium and brand-safe content, which they'll argue sets them above digital. There will also likely be lots of talk about efforts to reduce commercial clutter.

The upfronts come following a pared down and cleaned up Digital Content NewFronts, where digital brands partnered with more established media companies for content.

TV networks, for their part, have already been underway with their presentations. The newly combined Discovery and Scripps networks hosted a coming out party of sorts on April 10, with President and CEO David Zaslav touting the company's "functional content" as an alternative to the plethora of scripted programming, much of which is he said is not ad-supported.

A&E Networks put women front-and-center at its presentation in mid-March, which took place just days after former president and CEO Nancy Dubuc said she was stepping down from the company to lead Vice Media.

Thing haven't always gone as planned: Hallmark Channel parent Crown Media was forced to cancel its celebration at the Rainbow Room in March thanks to a snowstorm that barreled through New York City.

To stay up-to-date on where and when the biggest presentations and parties will take place, use this continuously updated calandear. You can sort by media company or date.