Demand Could Drive Price Hikes North of 9%, But Take Will Still Be Below '04 Levels
READ THIS NEXT
TV Upfronts and NewFronts 2021 Calendar

Who's the most bullish man in the TV upfront market? Easy: CBS CEO Leslie Moonves, whose annual ebullience is often dismissed by TV ad buyers as typical corporate posturing. This year Mr. Moonves is similarly confident, predicting "solid, double-digit increases when we sell next year's schedule a few weeks from now."

But he just might get his way this time.

Thanks to a decrease in overall broadcast-TV ratings , a rebounding economy and scatter prices 40% above the cost of ads sold in last year's "upfront" market, some ad buyers privately confide that their clients may have to capitulate to the aggressive demands of TV's better-performing networks.

It would be the first time since before the recent recession that advertisers agree to broad price increases above 9%. And not just at broadcast: Top cable outlets such as Time Warner 's Turner channels and NBC Universal's USA are also moving aggressively, buyers said. 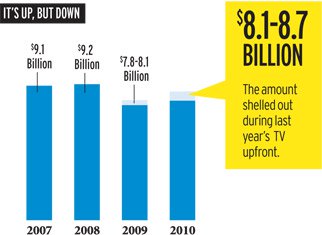 "If they are good marketers and have good agencies, they understand the math," said one network executive. "The supply [of ratings ] is somewhat diminished and the demand is strong. You're going to have a double-digit market."

But don't confuse the price hikes for a sign of an industry in revival. Marketers plunked down between $8.1 billion and $8.7 billion on the five English-language broadcast networks in 2010, according to Ad Age estimates, far short of the approximately $9.5 billion they committed to six broadcast networks at TV's high-water moment in 2004.

Executives on both sides of the bargaining table agree the networks' ability to command higher prices is a result of intensifying demand for a dwindling availability of ratings points. The increases don't mean advertisers are adding to their TV spending, just that they are choosing to put more money down ahead of time rather than be forced to pay steep premiums in scatter later.

Advertisers are still crawling out of a post-recession economy and have a dizzying array of factors to consider. Japan remains in turmoil, hampering several automakers. Increases in commodity prices have tamped down the ability of big TV spenders such as Procter & Gamble, Kimberly-Clark and Unilever to splurge on advertising.

"Those are all things that make doing business for many marketers more expensive, and they've got to be cautious about long-term outlays of capital, which is what the media upfront marketplace requires," said Chris Geraci, president-national broadcast at Omnicom Group's OMD.

There are other reasons for concern. Several ad buyers suggest the purchase of second-quarter scatter advertising— ad inventory purchased closer to air date—has begun to cool. What's more, said one senior media-buying executive, hikes in the cost of gasoline and raw materials in recent weeks have forced many large advertisers to take options back for third-quarter TV-ad purchases so they can put that money back into their operations and bottom line.

But there are other question marks. Pharmaceutical advertising could be lax in the fall, thanks to a recent round of consolidation among drug companies and a lack of new products in their respective pipelines. Also worth watching: Pfizer is expected to lose its patent on popular cholesterol drug Lipitor, which could affect the millions spent advertising it on TV.

To push back against price increases, ad buyers say they will raise the idea of moving money to other video options, or using smaller but reliably-performing second-tier cable outlets to help build scale. "Because it's been such a strong market for so many quarters now, we're seeing so much more interest in other sources of video," said Todd Gordon, senior VP-director of broadcast at Interpublic Group's Initiative . Those other sources include cinema or out-of -home screens at gas stations or gyms.

Can blue-chip advertisers get the same reach from those emerging screens as from TV? Not yet. When the two sides find their happy medium, the market will move in earnest.