TV Upfronts 2016: The Best and Worst of Broadcast's Big Week 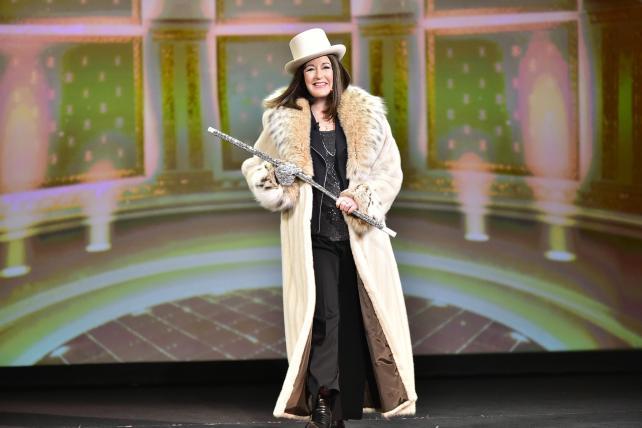 If any ad executive didn't know about "Hamilton," the Broadway sensation, they sure do after this week's TV upfronts. It was a week filled with spoofs of the musical, networks beating on digital video and lots of Donald Trump jokes.

Here's a look at some of the most exciting, shocking and delicious moments of TV's big week. 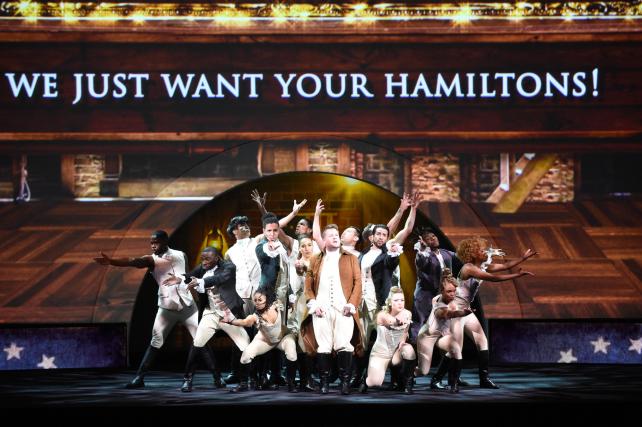 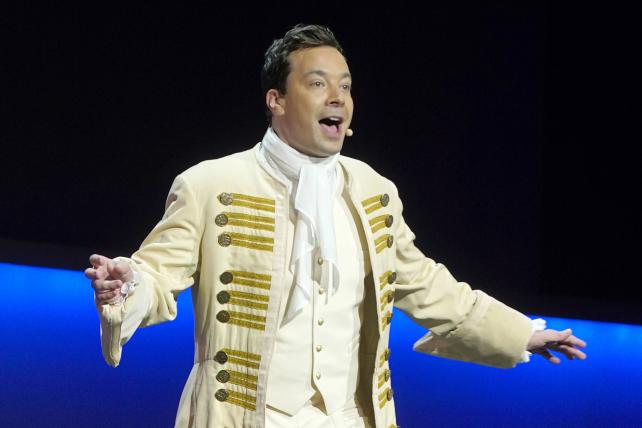 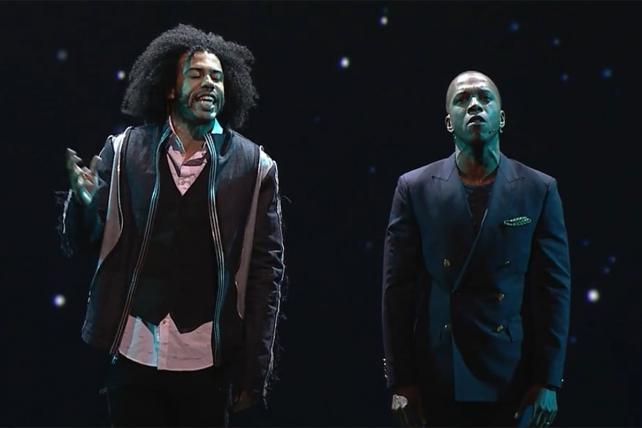 Best Performance of "Hamilton": What does it say when TV needs a Broadway musical to keep things exciting? There were three performances spoofing or featuring the cast of "Hamilton," and nearly every network presenting during the week mentioned the Tony-nominated musical in one way or another. "Hamilton" stars Daveed Diggs and Leslie Odom Jr. opened and closed ESPN's presentation, while Ben Sherwood, president of Disney/ABC TV Group joked that "Quantico: The Musical" would be debuting in the fall (a Playbill resembling that of "Hamilton" flashed on a screen behind him).

NBC's Jimmy Fallon and CBS's James Corden each performed spoofs of the show, and it was a toss-up which did it better.

Mr. Fallon replaced the lyrics to "Alexander Hamilton" and "You'll Be Back" with lines like: "Welcome back to upfronts week/See the networks lying though their teeth"; "What's our name, man? NBC Universal and we're selling you commercials at crazy rates"; "We have 10 new shows in the fall and the word Chicago appears in them all"; and "At least we can say we're the network that fired Donald Trump." (It all sounded a lot funnier over the hip-hop soundtrack).

Mr. Corden's lyrics included: "Yes we want your Hamiltons, your Benjamins and Washingtons"; "Some folks huff and fret that the network is 'just a dinosaur'/that brainless B.S. -- as you might guess makes us kinda sore"; and "The 'cool kids' like Apple and Netflix get lotsa buzz but when they need maximum eyeballs all the cool kids come to us."

But ultimately, the prize goes to Mr. Fallon, purely because by the time we saw CBS's version we had already reached the point of "Hamilton" fatigue (something previously unknown in the media). CBS did manage to one-up NBC by getting "Hamilton" creator and star Lin-Manuel Miranda to record a taped message for the audience.

Most Outrageous Outfit: CBS' ad sales chief Jo Ann Ross always makes a statement at the upfront; she once wore a dress that lit up with messages including the words "Your Ad Here." This year she strutted onto the stage at Carnegie Hall in a white fur coat, top hat and bedazzled cane. "What's up, bitches?" she asked the room of media buyers and marketers.

Biggest Punching Bag: TV execs laid into digital video, disputing claims that online video reaches more people than TV. And they had some stats of their own. NBCU's Linda Yaccarino said the average American spends seven times as many hours watching TV as using Facebook and watched TV 15 times as much as YouTube. "I don't care what those Silicon Valley guys say. There is no algorithm for heart-pumping, blood-racing, breath-holding, premium content," she declared.

And CBS CEO Les Moonves said "digital advertising lacks accuracy and credibility" and noted a shift of ad dollars back to TV. 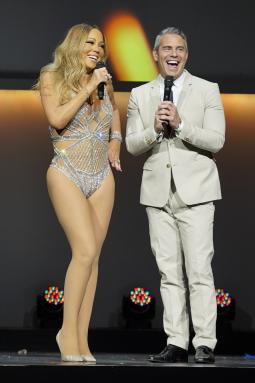 Most Awkward Moment: Wearing only a sheer, blinged-out body suit, Mariah Carey tried to have a diva moment during NBC Universal's presentation by being carried onto the stage in a chaise lounge by two young, shirtless men. As she was walked across the stage to meet Andy Cohen she abruptly stopped to have the men dip her. Her conversation with Mr. Cohen about her new E! reality show, "Mariah's World," wasn't much better, filled with giggles and awkward silences.

Funniest Presentation: As usual, the network's late-night hosts were on hand to poke fun at the ridiculousness of the whole upfront process. There were some good laugh lines from each -- from Jimmy Kimmel asking where "Uncle Paul" was at ABC's event (referring to former ABC entertainment president Paul Lee), CBS's Stephen Colbert sarcastically calling commercials better than sex and Seth Meyers comparing the sizzle reels at the upfronts to meeting your brother's new girlfriend. "She seems great," he said, "but you don't want to get too attached because chances are she won't be around next fall."

But it was Turner that brought the most giggles starting with a faux Town Hall debate featuring Anderson Cooper, Conan O'Brien and Charley Barkley. When Mr. Barkley was asked by Mr. Cooper how he interpreted Turner's bid to "reimagine television," he replied "I have no earthly idea what that means," before adding that it probably had something to do with "just coming up with some new shows." There was some clowning around with Shaquille O'Neal, who didn't attend the presentation at Madison Square Garden in person because "four-time NBA champions don't do upfronts."

TBS's newest late-night(ish) host, Samantha Bee, made an appeal to the "lovely, intelligent, sexually appealing people holding the money" to provide the financial backing that would allow her to become an official sponsor of the Republican convention in Cleveland. "For only $100,000, I can get banner space on the convention floor. I want this," Ms. Bee said.

And Billy Eichner of TruTV's "Billy on the Street" denied that TV was dying, but qualified the statement by saying the medium "has about three years to live ... so enjoy it while you can!" He also took a dig at Comedy Central, calling questions about the future of TV "more stupid than not giving Samantha Bee 'The Daily Show.'"

Best Jab at a Rival Networks: The upfronts are a time when networks get free rein to go after each other, taking swings at their rivals' programming, stars and top executives. Jimmy Kimmel always pokes fun at CBS' older-skewing audiences and this year Fox took a shot at Les Mooves, showing an image of the CEO made to look like Lex Luther and labeled Lex Moonves. But it was Homer Simpson who made advertisers gasp. In a video during Fox's presentation, Simpson called CBS' audience "the walking zombies" and said he would take a shot at NBC but he didn't know "if they're still on."

Most Over-Used Joke: The biggest butt of the jokes during the week was none other than Donald Trump.

Oddest Interaction With a Device: Amazon's Alexa – the virtual assistant part of Echo -- sat in the audience at NBCU's presentation and engaged in a very odd conversation with Linda Yaccarino about why Amazon came to NBC to advertise Echo. (The bit was meant to make a point about why TV is better than digital.)

Most Inconvenient Event: As the biggest TV networks pitched their new shows to advertisers, Viacom abruptly decided that it too wanted to a piece of the week. Although the media conglomerate had already hosted individual presentations for its Nickelodeon, MTV and Comedy Central channels, it threw together what it called a "Datafront" on Tuesday, during ABC's presentation, to showcase its data targeting capabilities.

Best Fun Fact: One of the most valuable pieces of information we walked away with during the upfronts came from a video playing ahead of ABC's presentation: Apparently you can rent out "The Bachelor" mansion for $2,100 a night.

Tastiest Party: CBS's after party took place at The Plaza Hotel, including its Todd English Food Hall, presenting buyers with a maze of treats such as tiny lobster rolls, a raw bar and fresh lavender donuts. There was even a Kusmi tea station for those who weren't sipping on wine or vodka tonics.