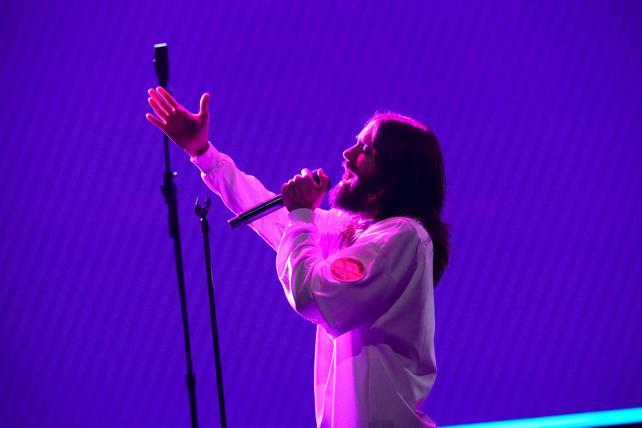 Facebook spoofs, awkward celebrities and late-night banter—the upfronts were, if nothing else, a reminder that despite the uncertainties surrounding the industry, TV can still entertain.

There were fewer tear-the-house-down musical performances than in years past and no one wore a light-up dress spelling out "your ad here." But there was some designer fashion, and even amid highly distracting court battles over the fate of CBS, the shows went on.

Here's a look at some of the funniest standup routines, biting jabs and the musical performances you never wanted.

Sean "Diddy" Combs hogged the stage at Fox's presentation. He was joined by his "The Four" colleagues, DJ Khaled and Fergie (who had to pry the mic out of Diddy's hand to get a word in). Fox co-chair Dana Walden had to practically kick Diddy off stage: "Do you want us to leave," he asked. "I want you to leave," Walden replied. "Okay, we're new to this," Diddy said. But before he left, Diddy joked that Walden would dance on stage at the upfront next year. While Walden reportedly struck a deal after the upfront to extend her contract by a year, Diddy's comment reminded people that the upcoming year for Fox brings many big questions.

CBS spoofed its own "Young Sheldon" with a video about a young Jo Ann Ross, president and chief advertising revenue officer. The taped segment included Ian Armitage, who plays the show's Sheldon Cooper; Zoe Perry, who plays his mom on the show; and Raegan Revord, who plays his twin sister. Emma Shannon played a pint-sized Ross who only ever talks about selling stuff.

ABC had its "American Idol" judges host an "upfronts audition," with celebrities from its shows like "The Goldbergs" and "American Housewife" auditioning for the chance to open the alphabet network's upfronts presentation. Ultimately, and unsurprisingly, Roseanne Barr was awarded the honor for her take on Frank Sinatra's "My Way."

But it was NBC Universal's spoof on Mark Zuckerberg's recent Senate testimony that got the most laughs. Linda Yaccarino was edited into footage from the Facebook hearing; it began with her removing a booster seat from her chair. "Someone give that back to Zuckerberg," she said. And when asked "who is your biggest competitor," Yaccarino replied that Joe Marchese, Fox's head of ad sales, thinks he is her biggest competitor but it is actually "that bitch PedalPrincess98 at Flywheel." It concluded with a Yaccarino double doing the robot.

NBCU doled out digital bracelets as attendees entered Radio City Music Hall promising an interactive experience. It's unclear what the wristbands actually did (aside from light up randomly), but it seems as though we ended up selecting a new awards category for E!'s People's Choice Awards.

Jimmy Kimmel stole the show at ABC's upfronts. After skipping the presentation last year to be with his newborn son who was undergoing heart surgery, the late-night host had plenty of zingers stored up.

"Our new slogan is 'Forward Together.' Hillary Clinton had a yard sale, and she let us have that for almost nothing."

"Our company is in the midst of negotiations to buy Fox. It seemed like a done deal, and then last week, Comcast, like the surprise ex-boyfriend who shows up on 'The Bachelorette' right before she gets engaged, shows up and weasels its way into our business. We got peacock-blocked, is what happened."

"I have to admit I'm excited about 'Murphy Brown.' It's refreshing to see anything brown on CBS."

"We are home to the No. 1 drama on television, a show that each week gives us twists and turns, heartbreaking reveals and this season, the departure of a once-beloved character. I'm talking of course about This … is the 'Today Show.'"

"NBC had a huge year thanks to the Super Bowl and the Olympics, and I realize that's a weird thing to bring up because this year we don't have either. It's like a waiter coming over to tell you which specials they're out of. 'We have a seared halibut that is to die for and also … not available.'"

"At this point, there are two kinds of development execs: the ones who develop new ideas and the ones who rummage through the storage closet trying to see if we still have the 'Alf' puppet. You guys, 'Alf' is back — and this time, he's a climate change denier.

CBS' Stephen Colbert went a bit too hard on politics. And James Corden, who in previous years did a rousing spoof on "Hamilton," came out with a rather lackluster bit on a new show pitch called "Young Corden."

Samantha Bee was on hand at Turner's presentation to talk up her new app. Designed to serve as an incentive to get first-time voters involved in the political process, the "This Is Not a Game: The Game" app also will offer a number of unique integrated sponsorship opportunities. "And that, my friends, is where you all come in," Bee told the crowd at the Theater at Madison Square Garden. "Whaaaat? Helping your country and marketing to a bunch of affluent 18-to-49-year-olds? Did I just hear the sound of 300 rock-hard boners?"

"I've been to a few of these," "All American" star Taye Diggs said onstage at the CW upfronts. "But this is the first time I've been proud." It sort of sounded like the actor was throwing shade at ABC (he starred as Dr. Sam Bennett in the "Grey's Anatomy" spinoff "Private Practice") and TNT (32 episodes of "Murder In the First").

"Two and a half hours I'll never get back" was the hot take from many people who attended NBCU's presentation on Monday. It wasn't until about 90 minutes into the dog-and-pony show that presenters even started discussing the broadcast channel. Trailers for Syfy and Oxygen shows got lost amid a performance for Telemundo and an appearance by the ladies of WWE. To be fair, NBCU has a much larger portfolio than its rivals, making it harder to be concise. But by the time Jennifer Lopez got on stage to perform, the audience was dodging the flying beach balls being thrown around by dancers to get out of Radio City Music Hall.

Musical performance no one wanted at 11 a.m.

Jared Leto and his band Thirty Seconds to Mars served as the CW's house band, and in keeping with upfront precedent, the actor/songbird groused a bit when the throng of media buyers seated near the stage at New York City Center didn't jump to their feet. "I'll tell you, these are not rock n' roll hours at all," Leto snarked, before exhorting the crowd to get up and dance. "If you want to get a little crazy … ah, I know—you got your suits on."

"Beat Shazam" host Jamie Foxx attempted to get Fox Network Group's head of ad sales Joe Marchese to dance on stage. Taken off guard, Marchese attempted some awkward footwork and desperately tried to escape. But he did redeem himself at the after party, jumping into a dance circle along with Foxx.

Designer Jason Wu created a dress especially for NBC's Yaccarino for the upfronts. The dress is described as a "pressed powder double face satin cocktail dress." Here's hoping this doesn't mean we will have to start asking people at the upfronts, "Who are you wearing?"

CBS' Ross took the stage at Carnegie Hall doing jazz hands, a nonverbal dig at Fox's so-called Jaz pods, one-minute commercial breaks that include "just a and z" units (the first and last spots in a commercial break). She then went on to ask why the audience was there: Was it to see her or to "see what I am wearing?" (See above re: Yaccarino's dress.)

Most overt show of diversity

The TV networks presenting this week were eager to throw around stats about how diverse their programming is both in front of and behind the camera. NBCU brought out the ladies of the WWE to show how the organization is evolving to be more inclusive of women, while Freeform said 60 percent of its series writers are women and/or people of color. But it was CBS whose emphasis was the most noticeable, and perhaps a bit forced. The eye network has long been criticized as home to shows filled with mostly white men. But this season it picked up comedies like "The Neighbor," starring Cedric the Entertainer, and "Happy Together," featuring Damon Wayans Jr. While it gets credit for its effort, it appeared the eye network was trying to fit some sort of quota rather than make shows that are simply more inclusive.