If there was one takeaway from NBC Universal's upfront presentation at Radio City Music Hall on Monday morning, it's that time slots don't really matter.

Instead of presenting the fall schedule the traditional way, day by day and hour by hour, NBCU kicked off broadcast's big upfront week by grouping new series from broadcast and cable by genre and audiences.

With the motto "reach redefined," NBCU presented shows such as NBC's "Wizard of Oz" remake "Emerald City" with USA's "Falling Waters" as places to reach "dreamers," and NBC's time-travel drama "Timeless" with Syfy's "Incorporated" under the umbrella of "rule breakers."

Exactly what those buzzwords mean is a bit unclear, but the strategy played to NBCU's efforts to weave data and audience targeting into the impending negotiations for ad time in the new season. 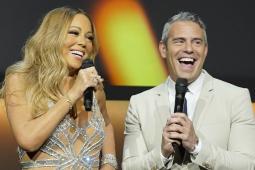 Mariah Carey, star of 'Mariah's World' on E!, and Andy Cohen, host of Bravo's 'Watch What Happens Live,' at the NBC Universal upfront presentation May 16.

Surely, data was an important part of the presentation on Monday. In one odd video, Elizabeth Hurley talked about NBCU's new Audience Studio, which is dedicated to helping marketers making more targeted media buys, comparing it to the art of fly fishing.

While audience targeting was at the center of NBCU's pitch to advertisers, Linda Yaccarino, chairman-advertising sales and client partnerships, NBC Universal, made sure to not lose sight of the content.

"We reach your consumers right here," she said, pointing at her heart, "where it counts the most."

It was NBC Universal's first dog-and-pony show that combined all of its broadcast and cable networks. Steve Burke, CEO and president of NBCU, harkened back to a time when the company hosted as many as eight upfronts in a span of about two months.

Combining everything gives ad buyers a sense of "how we manage the company," Mr. Burke said.

NBC will air the Rio Olympics in August, and Mr. Burke said he is expecting massive ratings, to the tune of three times the ratings of ABC, CBS, and Fox combined.

And after two weeks of the Digital Content NewFronts, where publishers made big claims about how their reach compares with or supercedes that of TV, NBC couldn't help but make some claims of its own.

In some regards, though, the show could have ended right after it began; the best part of the presentation was no doubt a performance by Jimmy Fallon spoofing the hit Broadway musical "Hamilton."

NBCU lived up to its word, at least, keeping the show at just about two hours, no small feat for a presentation encapsulating two broadcast networks and more than a dozen cable networks.