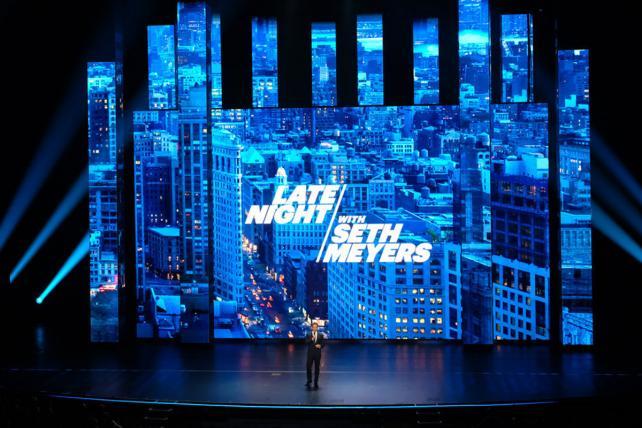 'If you had a show in the 90s and your phone didn't ring this week, you must have been heartbroken,' Seth Meyers told the crowd at the NBC Universal Upfront on Monday, taking a shot at TV's recent penchant for reviving old series.
Credit: Charles Sykes/NBCUniversal

Welcome to our special pop-up TV upfronts newsletter. For the next week I'll be nothing but an upfront girl living in an upfront world. Each day in place of our usual Media Buzz newsletter, we'll bring you breaking news about the upfronts and some of the best (and worst) of TV's dog-and-pony show. Get it in your email by signing up for the Media Buzz email right here—we're taking it over for the upfronts.

Mamma Mia, it's the upfronts again

NBC spent less time showing off trailers to its upcoming series (though in the nearly two-and-a-half-hour presentation it still felt like there were plenty) and instead focused on trying to entertain the audience of media buyers and marketers at Radio City Music Hall.

It certainly speaks to the changes that have taken place over the last several years. TV networks are in conversations with clients year-round, and by the time upfronts begin most decision makers have already been prepped on new shows and ad products.

So NBC's strategy was to put on a show. Here are some of the highlights:

The presentation opened with a taped spoof of the iconic "Mamma Mia!" song performed by a who's who of NBCU talent, including Debra Messing and Sean Hayes from "Will & Grace," Kristin Bell and Ted Danson from "The Good Place," Christian Slater from "Mr. Robot" and none other than the Crock Pot that killed Jack on "This Is Us." Sample lyric: "Mamma mia, it's the upfronts again."

It was ultimately all just a shameless plug for the upcoming "Mamma Mia!" movie sequel, which is produced by an NBC sibling at Comcast, Universal Pictures.

Several moments highlighted women and diversity: The U.S. women's ice hockey team received a standing ovation when they took the stage to introduce NBC Sports; the women of WWE hyped the rise of women in the organization and how female wrestlers are now called "superstars," the same as their male counterparts; and Telemundo celebrated diversity and inclusion with a performance of "This Is Me" from "The Greatest Showman."

Perhaps one of the oddest moments of the dog-and-pony show involved bracelets, which everyone recived upon entering Radio City for what was promised to be an "interactive experience." It's unclear how, but it turned out somehow we voted for a new category in E!'s People's Choice Awards.

Of course, late-night host Seth Meyers was on hand to poke fun at TV and advertising.

"NBC stands for Nothing But Chicago," Meyers quipped, referring to the full night that the network will dedicate to three Dick Wolf series from the franchise.

Meyers spoke about the departure of a beloved character from an NBC show ... "I'm talking of course about This Is…'The Today Show'" he said, referring to Matt Lauer's exit last year following sexual harassment allegations.

And on TV's turn toward bringing old shows back, Meyers said there are now two kinds of development execs: "Ones that develop new ideas and ones that rummage through the storage closet to see if we still have the Alf puppet."

"If you had a show in the 90s and your phone didn't ring this week," he said, "you must have been heartbroken."

Yaccarino then took the stage wearing a dress designed by Jason Wu especially for the occasion and threw out just as many jabs as Meyers:

"No family has ever gathered around a newsfeed. Have they?"

"The last time currency changed was back in 2007, that was 11 years ago… 11 years ago Meghan Markle was on 'Deal or No Deal' and on Saturday she gets to become a princess in England, yet somehow measurement has remained the same."

Once again Yaccarino emphasized the power of TV, digital's pitfalls and the inherently safe environs for brands that (for the most part) TV delivers.

Watch trailers for some of NBC's new shows here.

Nothing new to see here

There won't be much new on Fox's fall schedule, Anthony Crupi writes about the network's programming announcements on Monday. "In what represents the network's most conservative upfront slate in memory, the fall schedule features a pair of new multi-camera comedies and 11 primetime NFL games," he says. "And that's it as far as the new stuff is concerned."

"Last Man Standing," the Tim Allen ABC castaway that has been revived by Fox, will join the Friday-night lineup.

"We think ['Last Man Standing'] is a funny show and the audience really responded to it," said Gary Newman, co-chairman and CEO of Fox Television Group. "We thought there was an opportunity there for us, particularly after adding Thursday night football."

Despite everything it doesn't have in common with recent Fox comedies such as "New Girl," Fox TV's other co-chair and CEO, Dana Walden, said picking up the canceled ABC comedy was not an indication that Fox was undergoing a "tonal shift." As a broader, less serialized sitcom, it seemed easier to pitch to audiences tuning in for football, she said.

And on last week's cancellation of "Brooklyn Nine-Nine," which was subsequentally been picked up at NBC, Walden said: "We love ['Brooklyn'], those are great creators, it's a phenomenal cast. We ordered it throughout five seasons, which is a great length of time for a single-camera comedy. … Ultimately, we decided we just didn't have room for it, and we're really happy it's found a new home."

In this week's cover story, we take a look at how FX Network's is poised to enter a new TV era, one where it will likely be owned by Walt Disney Co. (or perhaps Comcast). Surely FX is weathering the same ratings erosion and advertising challenges as its rivals, but its library of genre-bending series and the creative freedom afforded to showrunners by CEO John Landgraf, has positioned the cabler to become an important content generator in an OTT world.

There's also an interview with "Atlanta" creator Donald Glover (before his "This Is America" music video dropped) who says he isn't in the business of making "niche shit." 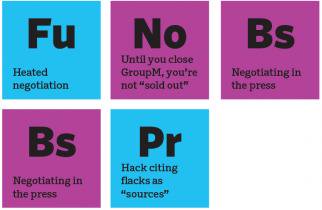 For the science brains, Anthony Crupi classifies the most elemental aspects of the upfronts—the sellers, the buyers, the venues, the showrunners, the less-than-noble gases that cloud the negotiations—into a complete periodic table, complete with the formulas for some common compounds. Some assemble into Grab some Bz before you Bs.

Construction zones: As the upfronts get underway, here's a look at what each broadcast network needs for the 2018-2019 season. For the first time since before "Survivor" helped transform CBS from an also-ran to America's most-watched network, for example, CBS finds itself having to rebuild an entire night of its schedule.

Networks, assemble: Univision is joining OpenAP, the consortium created by Turner, Fox and Viacom last year to help standardize data-driven audience buying on TV, Variety reports. Univision's entry follows that of NBC Universal, which also signed on recently. As we reported then, some 800 media accounts have been created since OpenAP came out of beta testing in the fall. While some media buyers say they have run some tests on OpenAP for their marketer clients, however, the platform doesn't appear to have significantly helped increase TV ad sales that go beyond Nielsen data.

Wait, how old are "Riverdale" viewers? The New York Times takes a look at why traditional TV is in trouble.