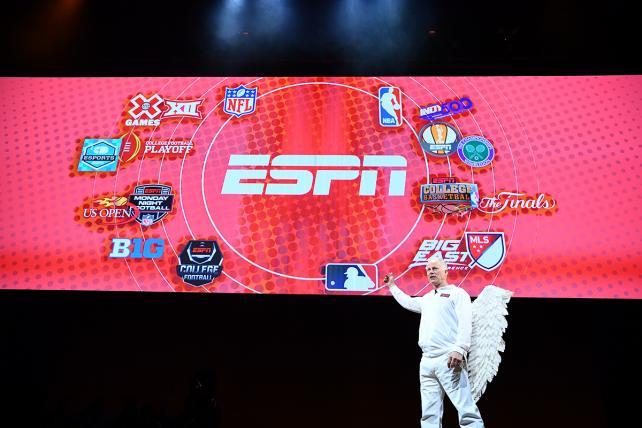 After kicking off with a funeral march and an uncharacteristically somber address by network president John Skipper, ESPN's 2017-18 upfronts presentation took a welcome turn toward the whimsical Tuesday when longtime anchor and resident DGAF grandmaster Kenny Mayne took the stage to riff on cord cutting, digital shenanigans and the validity of the TV advertising model.

Descending from the upper reaches of New York's Minskoff Theatre via a harness, a length of heavy-gauge monofilament fishing line and a set of oversized feathery wings, Mayne introduced himself to the throng of media buyers as the Angel of Advertising. Gesturing to the wires that suspended him over the stage, Mayne invited ESPN's guests to consider the set-up as "a metaphor for the strength of cable" before hitting them with a little straight talk.

"I think it's time we faced the truth together," Mayne said. "The total number of people watching TV the way they used to watch TV may have declined. Minimally. Like, a rounding error." He then trotted out a chart that showed a sharp uptick in the number of U.S. cable subscribers before confessing that the data was "from 1996."

Much like Jimmy Kimmel's tradition of slinging hard truths at upfronts for ESPN sibling ABC, Mayne for years has been the MVP of ESPN's annual dog-and-pony show. This time around, the buyers roared as he asked the question that has kept marketers awake at night since the Wanamaker era. "Even if the [viewership] trend continues, let me ask you: Do people even buy stuff based on advertising?" Mayne mused, before going in for the kill. "We'll go along with that premise if you go along with the idea that people are still watching television."

Mayne is so confident in his abilities to interface with advertisers that he managed to land a sponsor for his monologue in a nationally distributed peanut butter brand. (Not really, but just play along.) "This part of my presentation is brought to you by Skippy, the peanut butter that isn't even bad for people with peanut allergies," Mayne cracked. "I totally made that up. Like social media ad numbers."

Ever alert to the shifting winds of commerce, Mayne was quick to call on other peanut butter brands to invest in his spiel. "If there are other, better peanut butter people in the audience, then fuck Skippy," he said. (For a seraph, Mayne has a real potty mouth.)

The jabs at digital practices was in keeping with a theme that has resounded throughout Upfronts Week. On Monday, NBC Universal chair of ad sales and client partnerships Linda Yaccarino accused the Facebooks and YouTubes of the world of falling down on the job when it comes to brand safety, while newly-minted Fox sales boss Joe Marchese likened the epidemic of bot fraud, accounting discrepancies and unfortunate content adjacencies to the subprime mortgage crisis.

Mayne ended his segment by descending into hell with the demonic mascot of the New Jersey Devils.

While Mayne had the crowd in stitches, ESPN's upfront spectacle wasn't all giggles and guffaws. John Skipper immediately addressed the proverbial pachyderm in the room when he opened the show with a few words pertaining to the company's recent layoffs. "The current environment requires us to be realists, as well as optimists," Skipper said. "So let me be upfront: ESPN is responding to change and making changes. And we're doing that from a position of strength."

Skipper went on to outline the comprehensive changes that lie in store for its "SportsCenter" franchise, which includes a revamped 11 p.m. edition anchored by Mayne and Steve Levy and a morning edition helmed by Sage Steele. The new-look "SportsCenter" blocks come on the heels of the successful launch of Scott Van Pelt's midnight show, which is beating all the late-night network chat shows in the male 18-to-34 demo, and the more recent liftoff of Jemele Hill and Michael Smith's 6 p.m. edition.

"ESPN is the primary source of news and information for sports fans, and 'SportsCenter' is central to that," Skipper said. "Fans understand the distinction between getting a score or a highlight and getting it from ESPN … with personality and authority."

After months of speculation, ESPN also officially announced that radio host Mike Greenberg would break the seal on a New York-based morning program beginning Jan. 1, 2018, which will be followed in rapid succession by the premiere of a new show helmed by Bomani Jones and Pablo Torre. If nothing else, the aggressive programming moves may be seen as a shot across the bow at rival sports net FS1, which has of late been making moves of its own.

ESPN president of global sales and marketing Ed Erhardt closed out the upfront show with a meditation on trust, which he characterized as "the essential ingredient in any relationship." (It's also been another recurring motif during this week's network presentations.)

"While there's no such thing as a 'sure thing' -- in sports or advertising -- if we have trust, then we're able to make decisions with confidence," Erhardt said.