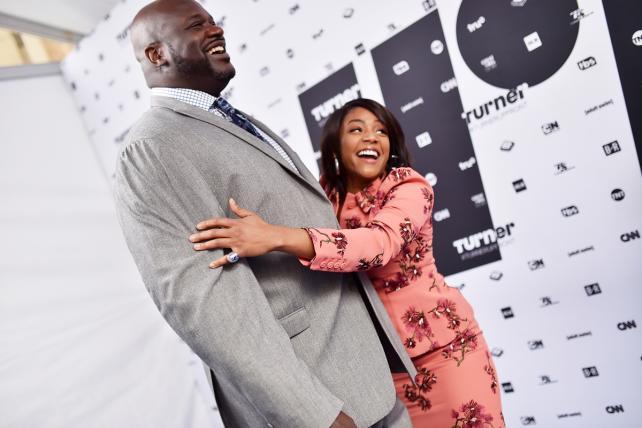 Shaquille O'Neal and Tiffany Haddish arrive at the Turner upfronts pitch at The Theater at Madison Square Garden on Wednesday.
Credit: Mike Coppola/Getty Images for Turner

It was introduced in 2007 as a stop-gap measure, a compromise between media buyers and TV ad executives that was never meant to be in place for more than a year or two, and yet despite mounting dissatisfaction on both sides of the table, C3 ratings this spring will serve as the negotiating currency for the eleventh consecutive upfront bazaar.

The benchmark against which some $20 billion in upfront commitments will be made in the coming weeks, C3 remains a woefully imprecise and inadequate metric. (Sloppy methodology aside, neither C3 nor its bulked-up sibling C7 account for fast-forwarding through commercials. In other words, the currency has never really measured what it's always been purported to measure.) And while the first three days of Upfronts Week have been punctuated by a drumbeat of calls to junk the industry standard, perhaps no network sales exec has been more vocal about the need to move forward than Turner ad sales president Donna Speciale.

Speaking to advertisers at Turner's Wednesday morning upfront presentation, Speciale made it clear that the old way of doing things would no longer cut it in the current media landscape. "Here's my promise to you: Today will be different. It has to be," Speciale said in her opening remarks to the crowd gathered inside the Theater at Madison Square Garden. "Our measure of success is no longer year-over-year TV ratings. Today is driven by viewing consumption on all platforms. When you buy on TV, you only get a fraction of our audience. When we transact on partial viewing, we all lose."

Since joining Turner in 2012 following a two-decade stint in the agency world, Speciale has been tireless in her efforts to move away from the Philco-era constraints of demos and day parts while reducing the sort of clutter that has made a muddle of so many commercial pods. (If you already suspect that viewers will do just about anything to avoid advertisements, try cramming seven or eight spots into the same pod and see how they react.)

Following a programming showcase spearheaded by Reilly and a montage of her past three upfront addresses, Speciale returned to the stage to hammer her message home.

"We must push this industry forward,'' Speciale said. "Turner has stayed true to our vision because we know that change is imperative. Our industry spends a lot of time talking about the future—but talk isn't action, and we're not changing fast enough.

"How we create, plan and buy media must reflect how people actually consume content today. Make no mistake, TV still matters—but when you only buy TV, you're missing value and opportunity."

So if everyone else in TV land is merely talking the talk, how does Turner expect to carry Speciale's omni-channel vision into action? For starters, the ad sales chief told buyers that Turner will forge one unified plan for advertisers to buy the totality of its audiences across all platforms. "In a marketplace with a shrinking pool of supply we've made it very simple for you to recapture those quality audiences," she said.

Speciale went on to declare victory in Turner's four-year fight to advance the cause of audience-based buying, noting, "100 percent of the hundreds of measured audience-targeted deals that we've completed show positive ROI. Each and every one of them." By way of backing that assertion, Speciale cited research that demonstrated how the average TV campaign generates $2.56 in gross revenue for every dollar spent on advertising, while Turner's audience-based initiative boasts a return of $5.66.

Among some of the other topics Speciale touched down on during her pitch were a company-wide move to limit commercial interruption and Turner's participation in the Open AP consortium to make it easier for buyers to secure bespoke audience segments across rival TV network groups.

While Speciale's presentation served as the nutritive portion of the Turner upfront, the network brass wasn't shy about stuffing advertisers with a whole bunch of entertaining junk food. To that end, Turner kept the bulk of its pitch as light and breezy as any broadcast upfront, keeping the program flowing with appearances by the likes of Samantha Bee, Snoop Dogg, Tiffany Haddish, Daveed Diggs and Tracy Morgan.

In what's fast becoming a upfront tradition, the inane and hilarious meeting of the minds between Conan O'Brien, Shaquille O'Neal and Anderson Cooper set the tone for much of the day. Cooper got things started by uttering the words, "I glow in the dark like a sea anemone," while O'Brien simply wondered, "Why are we out here?" before referring to the newsman as "the best dressed White Walker on 'Game of Thrones.'"

After Cooper gamely asked O'Brien and Shaq what total viewership meant to them, the talk show host went on a bit of a rant in which he accused Cooper of leaving his post. Reminding the CNN anchor that only a year ago, and in this very venue, he and his colleagues had promised they would hold President Trump accountable for his actions, O'Brien ratcheted up the faux indignation. "What are you guys doing?! [Trump] is like King Kong to your little biplanes—WHAP! WHAP! WHAP! WHAP!," he cracked. "Get to work! There's shit to do, and you're like 'Ummmmmm, what does viewing mean to you'?!"

After Cooper related an anecdote about watching a program about dental surgery during a recent stay at an Atlanta hotel, O'Brien drily observed, "And they're buying that show right now on Turner."

Upfront japery aside, TNT and TBS president Kevin Reilly had a good deal of news to impart re his programming efforts. After heralding TNT's efforts to "invest in women in front of, and behind, the camera," Reilly noted that the TNT dramas "Claws" and "Animal Kingdom" had lowered the median age of the network's original programming suite by 15 years. He went on to buttress Speciale's emphasis on total audience deliveries, saying that while the Jan. 21 premiere of TNT's "The Alienist" reached 6 million traditional TV viewers, the episode went on to scare up 51 million overall viewers when all other platforms were tossed into the measurement mix.

New to buy in this year's upfront is "Wonder Woman" director Patty Jenkins' neo-noir "One Day She'll Darken," which stars Chris Pine, and "Tell Me Your Secrets," a thriller starring Amy Brenneman and Lily Rabe. Both series are part of a new mystery franchise that Reilly calls "The Suspense Collection."

One of the cutdowns that seemed to resonate most with the MSG crowd was for the upcoming sci-fi/fantasy effort "Snowpiercer," which stars Jennifer Connelly and the aforementioned Diggs. Set on a 1,001-car train barreling through a grim and frozen future (Samantha Bee would later joke, "that reboot of 'The Polar Express' looks scary!"), "Snowpiercer" is based on a French graphic novel that was adapted into a feature film in 2013.

Speaking of Bee, the host of TBS's "Full Frontal with Samantha Bee" took the stage Wednesday to take the wraps off her new midterm elections app, "This Is Not a Game: The Game."

"I don't just make a weekly TV show where I shriek feelings about senators for a studio full of New Jersey tourists; we are so much more than that," Bee said. "Fall of 2018 is special—2018 is an election year. And voter turnout suuuuucks, especially for midterms. … But oh yes, 'Full Frontal' is going to gamify this bitch of an election with a mobile game."

Designed to serve as an incentive to get first-time voters to get involved in the political process, the "This Is Not a Game" app also will offer a number of unique integrated sponsorship opportunities. "And that, my friends, is where you all come in," Bee said. "Whaaaat? Helping your country and marketing to a bunch of affluent 18-to-49-year-olds? Did I just hear the sound of 300 rock-hard boners?"

Reilly stepped back onto his mark one final time to talk up TBS' comedy slate, but before doing so the programmer ventured into the ad-sales side of the pool. "Hopefully by now you've accepted that we are trapped by useless C3 ratings and together we can create powerful, customized partnerships," Reilly said.

In a memo issued before the presentation began, Turner President David Levy, an old sales hand himself, issued a call to arms that was perhaps even more emphatic than what Speciale or Reilly had to say about the matter. "We are in a new era of media and it's time to retire the Nielsen television metric," Levy said. "While it undoubtedly served its purpose, it no longer fully captures how to successfully measure an audience in today's landscape."

"Audience targeting works and is generating drastically greater results for our advertising and marketing partners. The time is now—this upfront—for advertisers to change how they think about the value of their marketing!"