Google took YouTube back to its roots in its pitch to media buyers and advertisers Wednesday night. Instead of making announcements about new channels or a major investment, YouTube used its "Brandcast" as an opportunity to show off homegrown talent and laud viral videos like the Harlem Shake. 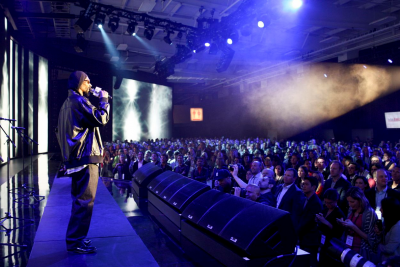 The event -- part of the NewFronts, where purveyors of digital video and other content are pitching ad buyers on their programming, much as TV networks promote their fall lineups at the upfronts -- stood in stark contrast to last year's YouTube presentation. A year ago the company announced its commitment to spend $200 million to promote original channels and featured a performance from Jay-Z and appearances by Flo Rider and Pharrell Williams.

The "stars" in attendance this year -- including Felicia Day, actress and producer of the channel Geek & Sundry; Lindsey Stirling, who was booted from "America's Got Talent" and went on to create the Lindseystomp channel; Kid President; and rapper Macklemore -- were likely unknown to ad buyers. The biggest performer in attendance was Snoop Lion (nee Snoop Dogg).

YouTube doesn't seem to have a problem with that, as it spent the entire presentation focusing on its reach among 18-to-34 year-olds, or what it calls Generation C.

This generation focuses on "creation, curation, connection and community," Google Executive Chairman Eric Schmidt said. And according to Nielsen, YouTube reaches more viewers in this demo than any single cable network.

The company boasted 1 of having billion unique monthly viewers and said people spent 50% more time watching YouTube in 2012 than the year before. And Mr. Schmidt expects that number to get larger as the proliferation of mobile devices grows.

This shift in its presentation is in-line with how YouTube plans to handle advertising negotiations. After its ad packages were described as "aggressive" last year, YouTube is lowering the minimum size of the buy it requires to lure a broader range of advertisers to shift money out of TV.

While YouTube talked big numbers, its announcements were limited. 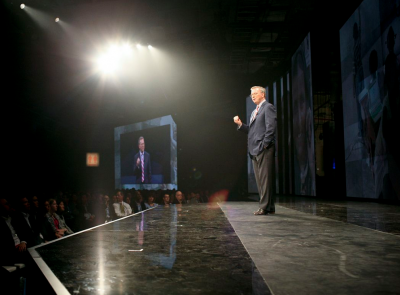 Ahead of the presentation, DreamWorks Animation announced the acquisition of Awesomeness TV, a YouTube channel dedicated to teens. DreamWorks CEO Jeffrey Katzenberg said they will look for ways to incorporate DreamWorks franchises into the channel.

Awesomeness TV also unveiled a new scripted drama, "Side Effect" and "How to be a YouTube Star," which will give fans the opportunity to star in their own video.

The channel has launched 20 shows over eight months. "You might ask wouldn't it make sense to do three or four shows and see what sticks?" said Awesomeness TV CEO Brian Robbins. "No. Us adults, we eat meals; kids, they snack and they snack a lot. I have a handful of marquee shows I keep on my radar; teens have the appetite and time to watch ton of content."

YouTube also unveiled Brand ID, a listening tool designed for the platform that allows brands to track beyond their own subscriber numbers to measure fan creative and listen to the conversations surrounding the brand taking place on YouTube.