Behind the Battle for Children's Marketing Dollars

Experts Estimate This Year's Kids' Spending Will Be Up, but Is There Enough Money to Go Around for New Networks?
READ THIS NEXT
How restaurant chains are duking it out to be the best in their categories

NEW YORK (AdAge.com) -- How many kids' TV networks are too many -- and are there enough ad dollars to go around? As Hasbro and Discovery's The Hub gears up for an Oct. 10 launch, and with Disney readying a preschool network, Disney Junior, for early 2012, more networks are going to be clamoring for an increasingly limited pool of ad dollars.

Analysts predict this year's kids' upfront will pull in 5% to 10% higher than last year's take of $850 million. That haul was down 10% to 15% from 2008 as food marketers such as General Mills, Kellogg and Kraft had to stem the flow of ad dollars while redeveloping their sugary cereals and snacks to meet new Food & Drug Administration and Federal Communications Commission standards. The kids' marketplace lost an estimated $100 million to $120 million last year alone, according to two executives, and is only expected to recover a fraction of those dollars this year as reformulated products start to hit shelves and roll out ad campaigns.

"With these new restrictions it becomes more difficult to increase the pie, so to speak," said Drew Crum, a children's-marketing analyst for investment firm Stifel Nicolaus. "With an increasingly more competitive landscape and a number of new entrants, that makes it harder for everyone to grow."

That's why mainstays such as Nickelodeon, Cartoon Network and Disney Channel are increasingly turning to older kids, tweens, teens and even parents to boost their bottom lines as their core marketing categories wrestle with government pushback. Jim Perry, Nickelodeon's exec VP-brand sales, recently told Ad Age that movie studios had surpassed food marketers as the network's biggest spender as a direct result of the FCC-mandated cutbacks.

Mr. Crum predicts cost-per-thousand-viewer rates to be up flat to low single-digits for kids' networks, with ad volume increases in the 6% to 8% range for this year's upfront. With so many moving parts and different players, Ad Age takes a look at how each of the networks are poised to do and how their ratings and revenues are holding up as they head into this year's market.

'BIG TIME RUSH' Nickelodeon hopes tween-oriented shows such as this one will give it a boost.
The longtime ratings and ad-sales leader in ad-supported kids' TV, Nick took the biggest hit from the cuts made by Big Food last year. That's why it's relying more heavily on tweens, with new programming such as "Victorious" and "Big Time Rush," and targeting more adults and parents by expanding its Nick at Nite block with new acquisitions including "My Wife & Kids" and "Everybody Hates Chris" and originals such as "Glenn Martin, D.D.S." Ad sales chief Jim Perry recently told Ad Age the network is seeing early signs of recovery from food companies such as Kellogg and Pepsi, which introduced new less-sugary versions of their products to consumers during the first two quarters. 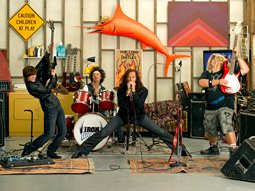 'I'M IN THE BAND' This live-action sitcom joined Disney XD's regular lineup in 2010.
Although Disney Channel is regularly neck-and-neck with Nickelodeon in total-day and prime-time ratings , the network doesn't accept traditional advertising and therefore doesn't compete directly for ad dollars. That's why Disney made a more niche play to steal share from Nick and Cartoon Network last year when it turned smaller Toon Disney into Disney XD in a move to super-serve boys 6 to 11. Although the gambit resulted in some new ratings points, it broke even from an ad-sales standpoint its first year out. In early 2012, the company will switch its SoapNet channel into Disney Junior in a bid to hyper-target the preschool market, albeit with an ad model similar to Disney Channel and PBS' Kids Sprout, in that it will only allow corporate sponsorships of certain programs.

The ratings game: Disney Channel consistently finishes No. 1 or No. 2 in prime time and total day in all key demos against Nickelodeon, while ad-supported Disney XD has become a medium-size player among children 2 to 11, ranking No. 4 in prime time and No. 5 in total among the demo during the first-quarter of 2010.

Last year's take: Disney Channel ad revenue is not tracked by Kantar Media, but Disney XD grossed $82 million in measured ad spending in 2009, down 1.1% from Toon Disney in 2008. 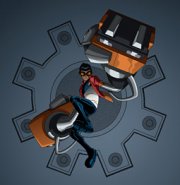 'GENERATOR REX' Network is finding success with animated series after toying with live action.
Turner's Cartoon Network suffered a bit of an identity crisis in 2009, experimenting with live-action programming that belied the network's name so much it toyed with rebranding the channel entirely. Scrapping that plan, the network is finding recent success with new series "Generator Rex" and "Adventure Time" and new episodes of core franchises "Ben 10" and "Star Wars: Clone Wars." College-oriented prime-time sibling Adult Swim, meanwhile, continues to thrive among its edgy demo, routinely beating all cable networks in its timeslot among adults 18 to 34 and still posting double-digit ratings gains.

The ratings game: Cartoon Network finished first-quarter 2010 as the No. 2 ad-supported kids' network (No. 3 after Disney is factored in), reaching an average 740,000 children ages two to 11 during prime time and 584,000 during total day. 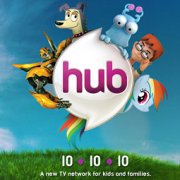 THE HUB'S HURDLES: The Discovery-Hasbro venture is challenged with getting toy competitors to spend on it.
The new kid in town, from Discovery and Hasbro, also has the biggest hurdles working against it. Not only is the Hub attempting to find new audiences where predecessor Discovery Kids previously stumbled, it's also courting sponsorship dollars from toy companies that might not want to spend money on one of their biggest competitors. Still, CEO Margaret Loesch is optimistic about the network's outlook. "It's still early but the response we're getting is that it's a very lively market. We have a large block of programming dedicated to the kids' market, but preschool gives us an opportunity to go after a different demographic."

Ratings outlook: Vying with Nick, Cartoon and Disney for a restrained group of audiences, expect the Hub to have a soft launch in the fourth-quarter but become a competitive third or fourth-place player once it finds its niche in early 2010.

Ad sales outlook: Attracting new sponsors will be difficult in a marketplace that has only single-digit growth on the whole, but parent-targeting brands such as automotive, financial and movie-studio marketers might want to make an early investment.