Keep Your Eye on the Screen and the Money Behind It

NEW YORK (AdAge.com) -- The haggling isn't over yet.

Many ad-industry folks follow the broadcast-television upfront until its conclusion, then figure the summer beckons and all goes slack. But what happened over the past few weeks -- the trading of some $8.5 billion worth of ad commitments to the coming fall TV season -- has ramifications that will last through the rest of the year. 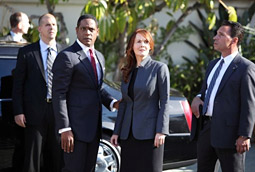 'The Event'
Credit:
NBC
Below, some issues you might want to keep your eye on as the TV screen continues to flicker.

Is TV really up?
Yes, the five broadcast networks are said to have captured anywhere from $8.1 billion to $8.7 billion for ads to go along with everything from ABC's "Grey's Anatomy" to NBC's new "The Event." But if you look at the figures, they could give pause. That's because the five networks sold approximately 15% more ad inventory this year than last, and the totals aren't tremendously higher than last year's, when the networks held ad time in reserve to sell later.

Sure, the upfront is legendary for its reliance on fuzzy numbers and the inevitable wacky math that goes along with them. But we can tell you that our $2.2 billion estimate for ABC's prime-time schedule isn't that much higher than last year's $2.1 billion; that our estimate of $1.6 billion for NBC's prime-time this year is essentially flat with our take on the network's performance from last.

Are any of these numbers solid and exact? No. Some executives and analysts will claim the networks did much worse than we estimated last year, a claim that's certainly possible. Directionally speaking, however, the foggy guestimates tell us this: All five networks had to sell more of their inventory at higher prices, just to eke out slight-to-moderate gains over last year's efforts.

With audiences continuing to splinter as more video-streaming gadgets hit the marketplace, this may be TV's new ongoing strategy -- charging more money to reach dwindling crowds, because McDonald's, Procter & Gamble and Nike still have little alternative when it comes to getting their promotional messages out to the largest group of consumers possible at a single moment.

Cable challenge
Broadcast may have wrapped its upfront haggling, but cable isn't too far behind. NBC Universal has already acknowledged that its cable outlets have wrapped up negotiations, and we understand that MTV Networks, which comprises Spike, Comedy Central and the MTV and VH1 suites of channels, has done so as well. Discovery Communications is 80% "wrapped" with negotiations and Time Warner's Turner Entertainment is nearing completion, according to people familiar with the pace of the proceedings.

In all cases, top-tier cable is said to be getting price increases on par with those of the broadcast outlets. What that means is that the seeming gap of perception between these two stripes of media has narrowed immensely in the last few years. Of course, money doesn't flow everywhere, and we're wondering what discussions are like at second-tier and third-tier outlets that lack the reach, the programming or the defined audience of their more robust competitors.

Scatter or 'scattered'?
No one believed this year's upfront would be anything but healthy. Why? The market for so-called "scatter" advertising, or inventory purchased much closer to air date, was off the charts. Broadcast and cable outlets made out like bandits, securing prices of as much as 30% above what they got in last year's upfront. When that dynamic emerges, advertisers are typically more eager to lock prices in during the following upfront cycle.

All of which begs the question: With the economic recovery moving very slowly, and with more advertisers putting additional funds into upfront talks, how much will be left for "scatter" in the fall and winter? TV executives remain bullish, and they have reason: With ratings in many cases eroding, and with as much as 80% of TV inventory sold in the upfront, ad time will be somewhat scarce. If demand is high, the normal laws of macroeconomics should serve TV well. In other words, the networks may still be able to secure big premiums for last-minute ads.

Should the economy stall or, more upsetting, dip back into recession, we're not so certain the scatter market will soar. Possibly far from it.