I cast my mind back to that particular adventure of editing five eBay spots for BBDO and Traktor in New York. It was very hot, indeed, and my fancy tweed jacket didn't help. Final Cut New York welcomed me like their long lost brother. I can't say enough good things about my colleagues. They work very hard and they enjoy what they do. Enjoyment was also evident with BBDO's five scripts; they were great, funny, simple and wonderfully stupid. Almost bespoke weirdness for the gentlemen of Traktor. They obviously love their work immensely. Every detail is celebrated and relished. One result of all this is excellent rushes. Like the finest ingredients for a chef, I couldn't wait to get my hands on them. Via internet postings, Traktor and I chipped the spots into shape. My main focus was mostly on performance and emotion. In "Dog Race," there's a red-haired gentleman who looked like he would explode if he didn't win. This set the level of intensity and I had to make sure none of the other performances and actions took away from it.

A scene from "Fox Hunt"
For me, editing always seems to be a purely intuitive process. I really like the Michelangelo quote, "It's very simple; all you do is knock off what you don't want and leave on what you do." I think it describes what I do pretty well. The first aim is to get the spots so you like them, then worry about the length. With "Fox Hunt," the helicopter shots gave it a wonderfully grand scale, but our everyday folks on horseback needed more work to keep up the energy. We cut three bits of music together to help maintain the pace. I also spent a lot of time thinking how a lunch box would run if it were afraid. The BBDO massive soon arrived and applied more fun and a thorough attention to detail. Like during a heavy workout, I might have groaned now and then, but I felt really proud at the end. We presented to the client at our edit suite, which I recommend when possible. As a film editor, you're often focused on the essence of what someone is trying to communicate, so to hear comments and criticism firsthand is very useful for the fine-tuning of the edit. Everyone was very happy. And all it took was four hot weeks in New York, several Hotel Chelsea adventures, a week in L.A., 200 music tracks, [assistant editor] Anchor Mak's skills, [EP] Rana Martin's hugs, five creatives, thousands of feet of top-notch rushes, two new pork pie hats, four directors, and one stubborn editor all cooked up with healthy splash of fun. 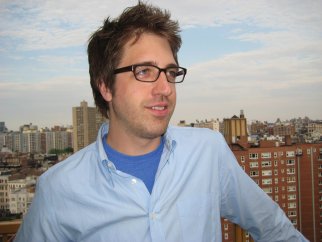 My task was to string together an uncomfortable exchange during a job interview, with the added twist of a talking shirt stain distracting the interviewer (unbeknownst to the interviewee). From the simple brilliance of the agency's script?to the casting of Rory O'Sullivan as the naive interviewee and Bryan Carney as the bewildered interviewer?I was excited to be a part of this project. In terms of comedic performance, the footage for "Interview" was some of the best I've worked with. The creative team [AD: Dan Lucey, CW: Nathan Frank & Peter Albores] wrote 10 or 15 possible lines for Rory to start each take with?and director Calle Astrand then encouraged the talent to ad-lib as the take went on. What was actually under-the-gun improvisation translated into a painfully genuine job interview. I think this is where Calle's contribution was most apparent?working with the talent and knowing how to achieve the best possible performance.

A scene from "Interview"
The stain was shot as a puppet?the puppeteer using a square yard of cloth hanging from a c-stand. The scale of the stain was about ten times the size that it appears in the spot?later reduced, tracked, and matted onto Rory's shirt at Framestore/London. Some of the biggest challenges of the edit revolved around the stain?stylistically, and technically. The agency's original reference for the sound of the character was the Swedish Chef from The Muppet Show. We spent several days in the edit exploring various sound options. In the end, we used the first thing we had tried, a Swedish-gibberish recording made by the director's friend, comedian Johan Rheborg. I spent hours stitching takes together, running footage backwards, time-warping?whatever worked best to make the stain look like it was mouthing Johan's gibberish.

Calle felt strongly that the humor of the spot lay mainly in the pauses between Rory and Bryan's characters?and this idea shaped my first edits. While the energy of the stain's voice grew, so did the intensity and length of Bryan's quizzical looks at the stain on Rory's shirt. In the mix, the level of the stain's audio against Rory's dialogue was also an important factor. While it was difficult at times to drown out some of Rory's funniest lines, the dominance of the stain's audio was essential as a comedic device. From agency to director, this process was truly a collaborative one. 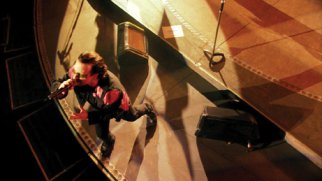 2D scene from U23D
Cut to the Third Dimension

When I was chosen as the editor for U23D, it was an honor and an incredible creative challenge.

My goal with U23D was to capture the unique artistic energy of the band's legendary live concert performances. It required an intense and intimate creative collaboration between the director Catherine Owens, the band, 3ality Digital?the film's producer and myself. We wanted to bring a magical experience in 3D for each song, with the end result being something emotionally and graphically compelling.

In terms of editing style, I treated each song independently, almost as if I were cutting a series of music videos. Some of the songs are music-driven, while others are more colorful, and others feature incredible graphics and effects. Probably the most spectacular vision comes during "Sunday Bloody Sunday"; the song itself is a military march, and required a much more straightforward, structured edit. I also loved working on "Beautiful Day," which represented a surreal, magical challenge in 3D. All the departments were significantly tested by that song, but we created something spiritually compelling.

3D Cutting: From 2D to 3D
To make 3D look good, believable and comfortable, a whole 3D team was required . When 3D footage is raw, there are misalignments, focus problems and color differences between the two lenses; it's very difficult on the eyes. Editing in 3D is a time-consuming process. Because U2's heritage is in the fast-paced world of music videos, we wanted to get the cuts done quickly so the band could review the film in 2D.

On to 3D
Once we had U2 and Catherine's input on the 2D cuts, we began the process of replicating the scenes in 3D with the goal of visually sustaining the same maximum energy and rock and roll feeling. After nine months of editing at Bluerock's Manhattan studio, I moved to L.A. for another nine months to work on a daily basis with the 3D team at 3ality Digital. We encountered three primary 3D creative challenges during this time period : pacing, depth and project organization.

Pacing
It takes an audience longer to register things when looking at 3D film. If the 3D footage is running too fast, people cannot register the moment and they won't have a good experience. It was my role to creatively strike a balance between "too slow" or "too fast." Pacing also relates to screen size. If you're in a smaller digital theater, since you have a lot of black around you, 3D is much easier on the eyes. But in an Imax environment where the visual impact is so immersive, it's all around you and you're in it. Fast cuts in 3D can give an audience vertigo and overwhelm them.

Organization
Particularly in a 3D environment, an editor must be extremely organized because everything is in duplicate; i.e. we had six hundred hours of U2 footage for both eyes (left and right). This meant the enormous amount of footage was organized, catalogued, and given a name convention system so the duplicate films related?tape left and tape right. Your finishing pipeline, especially when it's digital, is all file formats and enables an editor to establish a synchronized workflow with the 3D team.

Depth
Editors should look at 3D footage in terms of its dimensionality. For example, an editor needs to recognize that to cut from a 3D close-up to a super wide shot, people's eyes take time to readjust?their eyes will change their focal point and depth. Creating depth in 3D is not just about making a cut faster. Instead, it's about changing the proportion dramatically between a close-up and a wide shot. That gives viewers a much bigger jump visually. The pacing and the depth in 3D film is what truly distinguishes a 2D from 3D editorial approach.

The final step in the 3D filmmaking process was particularly cool: once my rough cuts were sent to the 3D department at 3ality digital and finished, the team of artists would go to a movie theater and watch it on the big screen. It was great fun.