Rupert Sanders calls the photograph you see here and the one on our cover, "my way of avoiding having to pose in front of a camera." The images feature Sanders' distorted face superimposed on the body of an old woman and a lanky man and are supposed to reveal something little known about the director, who this year has been up to many very well known things, like Monster's "Legs," Travelers' "Delivery," and the most honored campaign of the year so far, "Believe" for Xbox/Halo 3.

It turns out that the slightly disturbing pictures didn't require a touch of Photoshop on Sanders' face. As on "Believe," the director once again teamed with photographer Chris Soos and Stan Winston Studios to capture things in camera--the subjects in the photos are wearing a Rupert Sanders mask, created for this shoot from a scan of the director's head originally made during preproduction on the Halo 3 diorama figurines. (You can see what Sanders looks like for real in this year's Directors Roundtable) 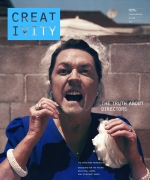 Although Sanders shied away from talking about what the pictures actually mean, the process of creating them revealed he has perfectionist tendencies, perhaps one reason his film is consistently brilliant. Beyond that, we'll have to let Sanders' work, and these images, speak for themselves.

Go to the next director