Even before these directors stepped behind the commercials lens, their creative lives had already been entangled, so it might not be a coincidence that all three can now claim a spot among the industry's finest directing talent. This year, 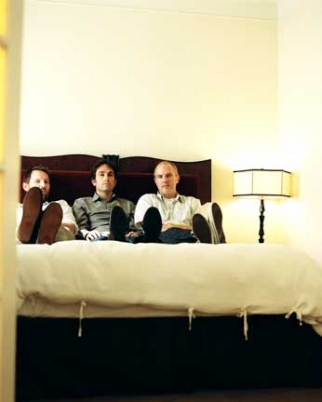 Stacy Wall remained in fine form for Microsoft, Pot Noodles and Gatorade; Phil Morrison continued his stellar performance direction on the popular Mac vs. PC campaign, and the much awarded VW "Safe Happens." Matt Aselton, who also contributed to the latter, broadened his palette on work for Starburst, the continuing TLC campaign and New Mexico Tourism while preparing to make his mark on the features world. (AD)

Matt Aselton: I've been in a few of Stacy's commercials, once as a janitor, once as man reading a New York Post, so I can vouch that he knows what he's doing; and when I was a copywriter Phil was my favorite director. They're both smart, clear, and very funny. Watching how they conduct themselves on set has been great for me, they're both able to communicate with such ease and fluency. I really like them as people and truly admire them both as directors so I feel lucky to be under the same roof. We don't always meet in Stacy's bed, just sometimes.

Stacy Wall: I like the picture, it's just a shame that the caption is wrong. I'm actually the handsome guy on the left with the beard. Matt Aselton, on the right, is a nice guy, but he looks a little ashy and bloated. When I was writing commercials, Phil and Joe Pytka were and still are my favorite directors. I learned so much from both of them. And Matt? Very talented smart director, but as I said before, he doesn't look well.

Phil Morrison: Stacy is the reason I'm a commercial director. When he was at Deutsch he and asked me if I would like to direct a spot for NBA Hoops Cards. I think I was 22. I don't know why Stacy didn't just direct it himself, but I'm lucky he didn't. After that, there was a period where much of what I did were spots written by Stacy, when he was at Wieden and Kennedy. His biggest influence on me was the fact that all his spots, even when they were fantastical, were rooted in the question "What are people like?" I always felt the desire to live up to what he had written. I first worked with Matt much later. Like with Stacy, I had the feeling that my job was simply to not screw-up the great thing he and Randy Van Kleeck (his partner) had come up with. Whenever I was shooting with Matt and Randy, and one of them started walking over to my monitor, I didn't think, "Uh-oh," but rather, "Awesome, it's about to get better."