The Race for the Best and Brightest

How Agencies and Marketers are Tackling the Talent Crisis
Bennett Porter is wickedly busy these days. She has just been promoted to Yahoo's head of marketing for Southeast Asia, so she's frequenting the parabola between Singapore and corporate headquarters in Sunnyvale, Calif. Yet Ms. Porter still is in the process of disengaging from her key role in building the company's buzz-marketing department from scratch over the last eight years.

And, oh yes -- she's continually processing calls from headhunters. "I'm always willing to listen, but I end up handing off these opportunities to other people," says Ms. Porter, who's in her mid-30s. "Yahoo has always anticipated my restlessness and given me new challenges so that I don't really have time to entertain other offers." 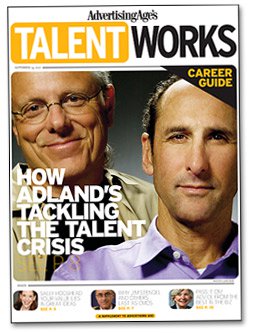 Each time Ms. Porter blithely hangs up on a recruiter is another small confirmation of the unprecedented talent squeeze that is throttling the marketing business. A shortage of strategic thinkers who can sagely guide brands or act as true business partners to clients has become severe. There's also a real dearth of people who can function holistically in an increasingly fractured media landscape that has become dictated -- if not dominated -- by digital platforms.

Marketing executives are trying to ease the shortage by throwing more money, perks and opportunities at individuals they want to keep; redoubling internal talent-development programs; casting their nets wider for potential recruits; helping develop advertising-education programs; and redefining the traditional roles of agency and client.

But for now, each major feature of the industry's deficit in talent, skills and experience is proving disruptive in its own huge way.

The lack of capable big-picture thinkers can leave brands adrift. "With the disaggregation of the entire industry, everyone is a specialist now, and it is difficult to find brand-management executives who have all the requisite merit badges as well as being strategic generalists who can put all the pieces together," says Bill McDonald, exec VP-brand strategy for Capital One.

Speaking in ones and zeroes
And the shortage of technologically fluent professionals can render brands incapable of leveraging today's explosion of digital demands and opportunities.

"The magnitude of platform diversity has become such that it isn't a question of whether there is talent ? there's just not been enough time for everyone to become proficient in everything," says Peter Krivkovich, president-CEO of Cramer-Krasselt, Chicago.

Agencies are bearing the brunt of the shortage and are sustaining an industrywide attrition rate of as much as 30% a year, by some estimates.

Many brand marketers claim that they've got their own bases covered. At JC Penney in Dallas, for instance, Chief Marketing Officer Mike Boylson says marketing-department turnover is practically nil. "We sell people on the multichannel aspect of our stores and the internet," Mr. Boylson says, "and we bring them on to a team and pair them up with people who know our end of the business, and then use their combined skills."

Competition
Large-agency CEOs also maintain that they're holding their own. "There are a few agencies in the world that people really want to go to, and we're in that group," says Rich Silverstein, co-chairman of Goodby, Silverstein & Partners, San Francisco. "But the very small pool of good talent seems to have a lot of choices of where they can go, and a lot of agencies are competing for them." 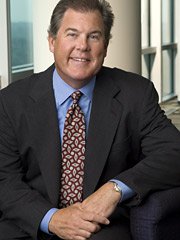 Bill McDonald, exec VP-brand strategy for Capital One
Heads of lesser known, midsize and small agencies, meanwhile, don't try to sugarcoat the fact that they're experiencing the brunt of the talent crunch. "We can't compete financially for startup salaries with a lot of other industries," says Beau Fraser, managing director of Gate Worldwide, an Ogilvy agency in New York. "So the best and brightest are going where it's cool -- like finance or consulting -- and if they're creative people, there are so many outlets that create content now, including Hollywood, music and the web."

Geography doesn't necessarily inoculate agencies either. In sunny San Diego, for example, the cost of living is so high that non-Californians suffer sticker shock when they come in for interviews. "Now we've decided to stick only with people who already live in California and [who] understand what it takes to live here," says Indra Gardiner, president of Bailey Gardiner, based in San Diego.

The right mix
Media companies, meanwhile, are struggling with their own talent squeeze as their marketplace changes convulsively. "We've raised the bar because we're representing brands now, not just types of media," says MaryAnn Bekkedahl, exec VP-group publisher at Rodale.

But given the rush of media to interactive platforms, the Emmaus, Pa.-based publisher doesn't have time to grow its own talent to fit. And the competition is fierce for the handful of professionals anywhere who represent the perfect elixir of experience, savvy and digital proficiency.

"We're only looking to bring on people who have multimedia experience," Ms. Bekkedahl says. "But it's like looking for a needle in a haystack. I don't expect people to have done it before in terms of representing multimedia. I'm just hoping that they've had maybe three to five years of print and then some online. Or, if they worked for a marketing company, maybe they understand events and promotions."

Nicola Bridges is one of Rodale's prize new recruits. Ms. Bekkedahl plucked the new editor of Prevention.com from iVillage.com, where Ms. Bridges was VP-editorial programming.

Ms. Bridges was busy recruiting more people like herself as she prepared for the fall relaunch of the site. "The key is to go outside the core media pool," she says. A case in point: the new producer she just hired from a real-estate-industry website, who also "has a passionate connection to health and healthy lifestyles."

Resfreshments needed
Some entire disciplines are parched from the talent drought. Media planning and buying, for example, traditionally has been a colorless domain. But the proliferation of new digital channels and rising client demands for spending accountability have made these jobs -- and their practitioners -- sexier. Too bad few agency folks have the depth or breadth of experience to navigate this new media world.

So Eric van den Heuvel, Gate's director of media solutions, gets three to five calls a week from agencies, clients and headhunters who covet the 35-year-old's combination of client-side, internet and media experience. He's content where he is for now, especially because "our media side is finally getting space at the big table and being treated by clients with equal importance as creative," he says. 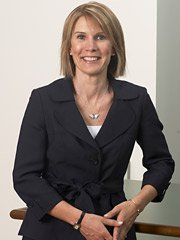 Nicola Bridges, the new editor of Prevention.com
Attacking this problem requires a broad offensive that must begin with marketing executives understanding the reasons for the talent shortage. It began with the dot-com meltdown at the beginning of the decade, which took out of play a lot of marketers who had begun compiling digital experience. The post-9/11 recession in the marketing industry also constricted the inflow of talent for a while.

Agencies have been hit hardest because they are struggling both to prove their fundamental worth to clients and to handle the rapidly changing work itself. "Because everyone and his mother has an opinion, a good [agency] strategic person gets challenged at every turn," says Bruce Mittman, CEO of Mittcom, a Newton, Mass., agency. "They start to get tired of it and end up going on the client side, where they get challenged less."

Lack of time
At the same time, agencies blame today's decided paucity of competent professionals. The biggest premium is on junior-level people in their late 20s and early 30s who have experience with clients as well as with digital platforms. The new dominance of interactive media arrived so suddenly that few seasoned marketers have had the time to ramp up on new technologies even if they've had the inclination.

The other problem is that entry-level careerists who grew up on digital media don't have industry experience yet. And many of them leave a lot to be desired in general. It isn't a demographic wrinkle; there are plenty of Gen Xers and Millennials in their 20s and 30s who could populate the marketing world.

Quality, not quantity, is what they lack. "We get a lot of r?sum?s, but I'm extraordinarily disappointed when I meet the people," Mr. Fraser says. "There's an awful lot of bravado and confidence but not much substance, and they have difficulties in thinking through a problem."

Yet others believe agencies must share the blame, because plenty of raw talent is available; the industry simply has misappropriated and wasted it. "We've really pigeonholed folks in this industry and created vertical proficiency, but we haven't created horizontal platforms to deliver channel-agnostic and media-neutral work," says Laurence Boschetto, worldwide president-chief operating officer of DraftFCB, Chicago.

Action
So what are marketing executives doing about easing the talent shortage and its effects? Several things:

1. Boosting pay and perks. Salaries are growing by as much as 25% to 30% for professionals with strong r?sum?s in interactive media, by some estimates. This summer, the Atlanta office of Avenue A/ Razorfish also raised its employee-referral bonus to $4,500 for a two-week "contest" period, compared with the previous $1,500.

Small agencies should get creative. Philippe Becker Design, San Francisco, for example, has a ski cabin at Lake Tahoe available for agency staff.

2. Improving the culture. "If you have a rich culture," Mr. Boschetto says, "the recruiting issue won't be as intense." So, for example, MPG is emphasizing to potential recruits the fact that its parent, Havas, has been winning awards for the company's operational "green" orientation. 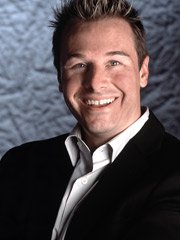 Eric van den Heuvel, director of media solutions, The Gate
4. Going beyond the hot skill set. Marketing executives can short-change themselves if they focus too narrowly on what's listed on a r?sum?. Cammie Dunaway, CMO of Yahoo, says she looks "for marketers who have lots of intellectual curiosity and are excited by learning and experimentation, and not just by relying on the set of tools they learned in school."

At the same time, nowadays many in the industry are guilty of looking past those with traditional-media experience just because they can't pepper their credentials with a lot of dot-com references. "Agencies are too fearful of taking a seasoned person, someone who gets it, because they might not know how to do interactive," says Leslie Kay, president of Kay & Black, a New York marketing-recruiting firm.

But marketers must look even harder outside their industry as well, Ms. Kay says.

Yahoo even employs a handful of marketing interns from local high schools, akin to an old-fashioned co-op program. "Managing them requires some new skills for our leadership team," Ms. Dunaway says. "They'll ask you if it's OK to go to lunch now."

7. Making agency careers more rewarding. More careerists now simply fail to see agencies as great places to work. One reason for that, says Capital One's Mr. McDonald, is that "many clients have taken things in-house and asked agencies only to implement."

But Mr. Boschetto laid more blame at agencies' feet. "There used to be mystique, excitement and dynamism in this industry," he says. "Today, people look at it as more transactional and short-lived. We will fare better in attracting strategic talent when we credibly position ourselves as an industry that generates and implements creative ideas that are best for building business."

Dale Buss
View all articles by this author