The Country Might Not Need a 'Minority Czar,' but Advertising Does

Perhaps We Need a Point Person to Kick Butt, Take Names
READ THIS NEXT
Marketers: Bicultural Hispanics Need to be Heard, So Give Them a Voice
Doug Melville
Credit:
While the NBA champion L.A. Lakers were visiting the White House, team owner and serial entrepreneur/CEO/businessman Earvin "Magic" Johnson had a special side visit in mind. After getting a ribbing by the 44th president on his '91 Finals performance vs. the Chicago Bulls, Newsweek reported that Mr. Johnson was also planning some alone time with Mr. Obama to speak to the president about appointing himself in a newly minted position of "Minority Czar."

The position would be a "high-profile liaison between the White House and the black and Latino communities." Johnson, who I once worked for, wants Obama to address "the growing number of unemployed black men; the continued practice of big banks refusing to lend money to minority businesses; and the rise in HIV and AIDS in the black and Latino communities."

According to Newsweek, Johnson planned to nominate himself but also added that "if [Obama] wants someone else, that's fine, too. But the sooner the better."

My interpretation of what Johnson is saying is, in effect, that by having an ambassador of the minority cause, putting a face on the movement and getting some public momentum to build on, the minority community as a whole can be heard, be recognized, and move ahead to some brighter days -- socially, economically and professionally. Essentially, it's the same thing he's been doing at the helm of Magic Johnson Enterprises.

While the American people keep yearning for budget cuts, smaller government and less involvement, opinions on this position are sure to go many ways. Everything from "Do we as a nation need this position at all?" to "Who is the right person for the position?" will get tested in the court of public opinion and throughout the media. But I want to move past that and get directly to the results aspect of the argument. That being: "What industry needs a minority czar step-in to improve its current situation?"

And with that, I would like to formally nominate the Advertising Industry.

A year ago this month, Madison Avenue was brought to the forefront by the NAACP and by famed attorney Cyrus Mehri's firm, Mehri & Skalet. The Madison Ave Project, as it was dubbed, screamed to all who would listen about the industry's wide lack of diversity in hiring practices. The story got coverage in The New York Times, here in Ad Age, and throughout many other circles. 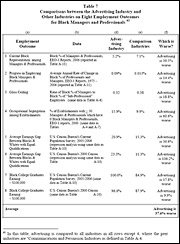 Review this chart from an accompanying report put together to back up the findings that compare the advertising industry and other industries based on eight employment outcomes for Black Managers and Professionals. (Click here for full Bendick Egen Advertising Industry Report.)

This report sights that the ad industry is over 37% worse than other industries, an issue that has been plaguing the advertising industry for years. At the same time, a book by Jason Chambers, titled "Madison Avenue and the Color Line: African-Americans in the Advertising Industry," explored the history of this issue.

All of this has brought to the forefront a series of questions. Are Chief Diversity Officers working or are they merely figureheads? Are the minority numbers correct or skewed? What can reasonably be done in an economy that is suffering? Where does personal responsibility come in? What responsibility do holding companies have to fix this?

A year later, as we kick off a new decade, are we any better off?

Not really. The subject has seemingly fallen off even the back page. Whether it is because of tough economic times hitting advertisers pockets, agency growth slowing or shifting media consumption, the urgency of the Madison Ave Project has seemed to dissipate.

Which brings me back to the Minority Czar.

Both the advertising industry and the Obama administration could use some good PR on minority relations these days -- and the Minority Czar may just be the answer.

If the position is filled with the right messenger with the right message, both successful and visible results can be reached. Hopefully a touch of Magic can do for Madison Ave exactly what he did for the NBA, HIV, urban revitalization and minority businesses -- shine the light that turns doubters into believers. 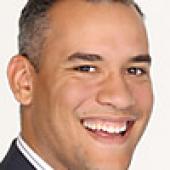