Multicultural Insight: Why McD's Is Lovin' It -- and You Should Too | Ad Age
Skip to main content
Sign In Register

Multicultural Insight: Why McD's Is Lovin' It -- and You Should Too

Everyone Should Study Golden's Speech at the ANA Conference
READ THIS NEXT
Marketers: Bicultural Hispanics Need to be Heard, So Give Them a Voice
My arrival in Phoenix for the ANA Masters of Marketing Conference started off on the wrong foot for a Hispanic marketer. It was Latin Grammy night and, much to my surprise, my room at the JW Marriot Resort was equipped with a digital television that offered exactly zero Spanish-language options. No Univision. No Latin Grammys. Of course there's always TiVo, YouTube, Twitter and Facebook, but c'mon. No Univision? In Phoenix?

The next morning, Bob Liodice, ANA's CEO, shared the tenets of a new Marketers' Constitution. In doing so, he referenced Point 7, which touched on diversity. Nice. But not new. We all know diversity often makes the list of Corporate America's priorities and then gets filed under Hopeful Resolutions rather than Quantifiable Results. Still, always good to know it's there.

After a few strong but expected presentations from Walmart and others, McDonald's CMO Neil Golden took the stage. In 30 or so minutes, he restored my faith in corporate-kind. In front of an audience of his peers, he made a powerful and pointed presentation in which every single Power Point slide focused sharply on his over-arching premise: "Leading with Ethnic Insights." 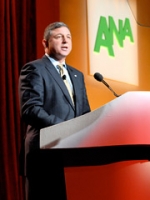 Neil Golden addresses the ANA Annual Conference in Phoenix.
Insight 1: "How did a White Jewish guy get here?"
First off, by choosing to use that as his opening remark, whether knowingly or unknowingly, Mr. Golden sent several important messages to the ANA audience. A.) I'm comfortable with cultural identity. B.) I'm not pretending to be something I'm not. C.) I'm also not going to run away from consumer segments I may not understand deeply simply because I wasn't born into them.

That's right, marketing community. When did you have to be something to engage it? Do you need to be a dog to sell dog food? A woman to market Maxi-pads? Sure, it helps to have personal experience for a richer understanding of insights and their reasons for being -- but gone are the days when a marketer can take a pass on consumers because they speak a language you didn't learn in high school or because they challenge you with cultural distinctions from whatever "tribe" you call your own. Gone are the days when you can just let your agency handle that which you don't know or feel comfortable with. Marketers are in love with the word "insights." It's the word de jour. Insights aren't new, folks. What's new is that you're finally starting to listen and be receptive, so you're beginning to notice them for yourselves.

And, by the way, that's exactly what Mr. Golden went on to explain about his early entry into multicultural marketing. He arrived in Chicago and realized McD's had a local competitor that was addressing ethnic patrons better than it was. He was told by management that he could have $50,000 to "fix the problem." He turned the money down. He knew it wasn't even a bandage. He knew that he would be better served by revising his entire plan for the market. So he listened. He got consumer feedback. Then, he got franchisees together from the communities that were important to the business and he told them about the consumer feedback. And they questioned him. African-American franchisees challenged him when he said they had done "mall intercepts." They opened his eyes to the fact that "we don't have malls in the ghetto." Listening to the right consumer started with listening to the right franchisees and, over time, it has shaped Mr. Golden's perspective about the power of leading with ethnic insights.

Insight 2: A rising tide lifts all boats.
Mr. Golden went on to document the success that leading with ethnic insights has generated for the brand. It wasn't long before he realized that when his African-American sales and Hispanic sales were up, the overall sales benefited and increases were experienced across the board. This is a concept that I have emphasized to so-called general-market agencies for years. When you support your client's effective use of dollars against as critical a consumer segment as Latinos, for example, you are not giving up budget to competitors. You are contributing to the overall success of the brand and that will come back to benefit you as well as everyone else. It is short sighted, selfish and frankly stupid to believe that over-saturating and duplicating against an aging demographic is a winning strategy.

Insight 3: Blank page. No constraints.
After sharing creative work done for Asian-American, African-American and Latino consumers using both culture and language, Mr. Golden shared his philosophy about having his agency partners work on strategies and plans that start with a blank page and no constraints. From there, he acknowledged that it was both an art and a science to aggregate the best work from all segments and apply it to the betterment of the total brand. In the end, there are always messages specifically crafted for the individual segments. At the same time, creative and cultural convergence allowed for ideas that are universally appealing and have cross-cultural impact to flourish.

Insight 5: It's not about skin color. It's about skin in the game.
Finally, Golden boiled it all down to "green" (with the "eco" emphasis on eco-nomy). His presentation was all business. And since the forum was ANA's Masters of Marketing versus the ANA Multicultural Conference, it was a presentation that went far beyond preaching to the choir. It spoke directly to the uncomfortable and unconverted segment as well.

In fact, a polling question fielded by Liodice following the morning's presentations asked the audience to choose where their organization was in terms of multicultural marketing commitments and the use of specialized agency partners. The majority of the audience responded that they had not engaged any specialists of this nature. One can only hope that presentations like Mr. Golden's and the lunch panel comments of Mark Addicks of General Mills, who also prioritizes the voice of ethnic America to champion his brands, will have an impact on a marketing community that seems more comfortable with using pop culture to be "cool" than with using consumer culture to truly communicate and connect.