Pernod Ricard is marketing a limited edition of Absolut called Absolut Brooklyn. It's billed as a "Spike Lee Collaboration" and features a logo designed by the director. But the director and the marketer are catching some flack down in the Bedford-Stuyvesant section of Brooklyn. Why? When the Children's Aid Society sent volunteers out into the neighborhood to count alcohol billboards this summer, guess which brand dominated. 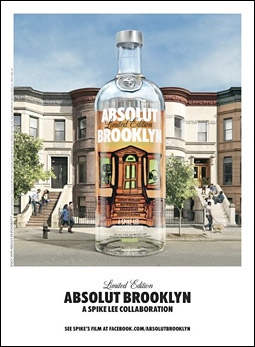 According to The Daily News, it was Absolut Brooklyn. And this has disappointed the students who volunteered to do the counting.

"He was targeting us when normally he would make movies that would uplift our community," 17-year-old Krystal Chapman told the newspaper, adding that she thought it was "hypocritical."

I understand the disappointment here, but the kids may be being a little harsh on Spike Lee. He doesn't make the media buys, after all. Bed-Stuy is part of Brooklyn and therefore part of the natural target market--and just because a billboard is outside doesn't mean it's targeting children. Further, Absolut Brooklyn ads are all over Brooklyn, even neighborhoods that are predominantly white.

Still, not a good PR moment for the brand. Pernod Ricard did not return calls for comment. (Via Gawker)