I might have skipped the show had it not been for one of my favorite actors, Andre Braugher, who plays Owen, one of three main characters. Owen and his two college buddies Joe and Terry, played by Ray Romano and Scott Bakula, respectively, are middle-aged and still trying to figure out the happiness equation. Owen is a bit out of shape and lives with his caring and realistic wife and their three small children. He also works as a salesman at an automobile dealership owned by his overbearing and critical father. 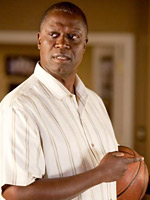 Andre Braugher plays Owen on TNT's 'Men of a Certain Age.'
As a consumer -- not as a researcher -- I, like many in the black community, am concerned about the portrayal of African-Americans in the media, and particularly how black men are portrayed. As reported in Target Market News, Essence Magazine's October 2009 survey about black men in the Obama Era revealed that 88% believe black men have not been portrayed more fairly in the media since the presidential election.

Additionally, findings from a recent package-goods study indicate that a majority of black Americans agree that more positive black male role models are needed in the media.

Owen is no hero, per se. He has challenges, but he's no slouch either. Importantly, the writers did not portray him as the black friend, but a friend. It's not only the great chemistry between the characters; Owen has full character development where we see his trials and victories as we do those of his buddies. And when they come together to "share," Owen challenges them and often imparts his wisdom. It's nice to see the black man not portrayed as "the joke" or a stereotype, but an equal BFF.

Pepper Miller
View all articles by this author