Internet Radio Must Tune In to the Emerging Hispanic Mainstream

A Mix of Mass and Niche Appeals Can Reach a Young, Diverse, Growing Listenership
READ THIS NEXT
Marketers: Bicultural Hispanics Need to be Heard, So Give Them a Voice
John Trimble
Credit:

Last year was a landmark one in Hispanic media. On TV, new and planned broadcast and cable channels from Fox, ESPN and others now battle for the attention of Hispanic viewers against incumbents Univision and Telemundo.

Though not receiving the same national attention as TV, equally dramatic shifts have taken place in the Hispanic radio landscape. Like TV, the radio marketplace has quickly evolved from local broadcast, then satellite, to the emergence of internet radio as a primary destination catering to the changing musical tastes and listening preferences of Hispanic consumers, an increasingly powerful consumer segment of the U.S. population.

According to the Selig Center for Economic Growth, Hispanic spending power will rise to $1.5 trillion by 2015, or nearly 11% of total U.S. buying power. U.S. Census projections offer a similar view on the growing importance of Hispanic consumers. Hispanics presently make up 16.3% of the total U.S. population, or just over 52 million people. By 2050 this figure is projected to reach 133 million, or nearly one-third of the entire U.S. population.

As marketers, we obviously shouldn't wait until 2050 or even 2015 to better understand the shifting needs and perspectives of Hispanic consumers. Findings from a recent internet radio study suggest brands should adopt a flexible mix of mass and specialized marketing techniques to successfully communicate with a Hispanic community that is young, vibrant and ethnically diverse. The study was conducted by Bovitz Research focusing on the online-music consumption habits, social interactions and shopping preferences of Hispanic consumers.

Additional takeaways from the study include:

Mobile-centric. While internet radio services such as Pandora are now ubiquitous, available across a multitude of media platforms in the home, office and in motion, 88% of Hispanic listeners prefer mobile devices such as smartphones and tablets (compared to 75% for Pandora's general listeners). When utilizing mobile to engage Hispanic consumers, marketers should consider enhanced options that take advantage of location, with immediate calls to action such as instant coupons, check in's, proximity invites, social sharing, etc. Getting this right will translate into improved response from this important demographic segment.

Mass reach and geo-targeting in equal measure. Reaching Hispanics in the United States requires both mainstream options and precise targeting to address varied tastes and interests, market-to-market and region-to-region. Hispanic consumers in Miami will have both commonalities and distinct brand differences with Hispanic consumers in Los Angeles. Consider marketing options offering both broad reach and message flexibility by individual listener.

For example, earlier in 2012 Pandora focused on Spanish copy over English for an insurance client to reach Hispanic adults age 25 to 49. The decision resulted in lifts in message recall (23%), brand favorability (53%) and purchase consideration (47%).

The prospect of Hispanics making up nearly one in three U.S. consumers by 2050 will likely offer many unique opportunities and challenges to marketers in the years ahead. Possessing general-market characteristics as well as a rich and diverse cultural heritage, Hispanic audiences may well rewrite the definition of what is considered mainstream (media or otherwise) in the United States.

In the meantime, marketers interested in ongoing conversations with Hispanic consumers will have a growing palette of media options to choose from on TV and, most notably, via internet radio.

ABOUT THE AUTHOR
John Trimble is chief revenue officer of Pandora. 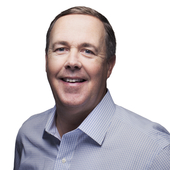 John Trimble is the chief revenue officer of Pandora, where he is responsible for all advertising revenue, strategic sales marketing and advertising operations. Pandora's diverse revenue streams tap display, mobile and audio that reach consumers on their computers, mobile phones and consumer electronic devices. Pandora’s advertising offerings utilize the super-specific aspects of internet radio: a medium that enables advertisers to reach any type of consumer, anytime, anywhere, based on a multitude of quantifiable data.