We've come to expect certain carmakers to inject some soul into the super steely and slick world of auto advertising?Saturn, Volkswagen, Honda have been prime champions over the years. But in 2006, Toyota Japan joined the ranks of auto innovators, via this strange but compelling spot, in which humans commandeer, even take the place of a vehicle's every part, from the windshield wipers and air bags, to its cupholders, headlights and seatbelts?in a refreshingly blatant announcement of the brand's "Human Touch." Directed by the English-Japanese directing duo Ne-O of Stink, the spot also features an obtuse but soulful track from Soundtree, featuring the folksy vocals and instrumental mimicry of former Stairs frontman Edgar "Jones" Jones.

What were the client's expectations for this ad?

Hideyuki Tanno: To convey the safety of Toyota with world-class creative. Increased numbers of people that understand Toyota's concern for safety and its stance toward manufacturing, greater confidence in the brand, and an expanded Toyota fan base.

Who is the target audience for this TV commercial?

Tanno: All residents of Japan were the target. Toyota produces various models for various targets, but the objective with this commercial was to give all people an awareness of the Toyota's corporate philosophy.

What was the brief for the creative team and how did they address it?

Tanno: We had to come up with something really creative, but other than winning confidence in Toyota via creative on safety, we had a relatively free reign on what we did. The temperate nature of the Japanese people means that car crashes, scenes of danger and other negative executions usually don't have the desired affect. Besides, although negative creative may seem powerful, it is not necessarily good for building a corporate image. Instead, we tried to convey safety in a positive, upbeat way. From there we came up with the "always protecting you" concept. 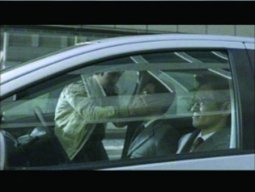 How did you come up with the human-centric idea?

Tanno: I was thinking that safety means seatbelts, so I made a sort of seatbelt of my hands. This made my body look like a car seat and got me thinking that we might be able to make all sorts of car parts out of human beings. That opened the floodgates and I soon came up with a whole bunch of corny human parts.

The commercial has a very distinct visual style, somewhat different from other celebrity-driven Japanese ads we've seen. What were you trying to convey with the particular look of this spot?

Tanno: For some reason a lot of Japanese car advertising features European and American talent and European and American locations. Japanese people do like the Western lifestyle, but this means talking about Japanese cars with a Western vocabulary. American and European cars are known for their drive and design; they have a cool presence as machines. But Toyota's strength lies in its exhaustive service covering all contingencies. Once you drive one, you never want to drive anything else. That is the tradition of Japanese hospitality. Additionally, Japanese have consistently approached manufacturing studiously and conscientiously. We wanted to appeal more to this uniquely Japanese aspect. To do this, we cast people that are more Japanese than the Japanese themselves, and chose Tokyo, the capital of Japan, as our location. Tokyo car commercial shootings are extremely rare, mainly due to the chronic traffic jams.

Why did you choose Ne-O of Stink to direct?

Tanno: Ne-o are Jake, a British guy, and Ryoko, a Japanese woman. They are based in the UK. We wanted them to direct our piece for the borderless "alienness" that they are so good at, and because they were up for putting loads of "human parts" (or experts, as we call them) into a story to keep viewers enthralled. They also responded positively to our order to achieve this without resorting to computer graphics (in fact only the blue matte process was used).

Was there anything unique about the production process?

Yasuyuki Kubota: At first, it was a written concept, only words. So we decided to do a test video with me, the producer, and two creative directors acting as the "driver"and "front seats" just to see if the idea actually worked. We shot it, edited and used it in the presentation, even though no video was asked for. And apparently, from what we heard from the people attending the presentation, it did work! After we won the job, we started to work on the boards and at the same time, searched for directors all over the world. The nationality of the director was not a priority, but we did have a condition that the commercial would be shot in Japan (since Toyota is a Japanese company, after all). We found Ne-o had the sensibility, techniques, knowledge, taste, etc. to bring the spot alive. 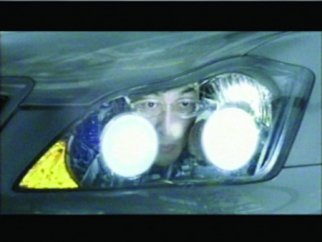 Were there any funny incidents during the shoot?

Kubota: The five guys playing the seats and the guy playing the driver, six of them in all, were crammed into the car like sardines in a tin for the entire two days of the shoot. They were a bit standoffish to begin with, but toward the end, I could hear them through the walkie-talkie in the car cracking jokes that only they would understand. They seemed to have developed a warm and fuzzy solidarity. Plus all the creatives and producers appear in the commercial!

Who is the author of the music? Why did you choose this particular approach to the sound?

Kubota: The music production house was SoundTree. SoundTree has produced a lot of great work, including PlayStation's "Mountain," which won a Cannes Grand Prix in 2004, the year in which they also picked up a Cannes music award. It is not your usual music. It is borderless, and like nothing you've ever heard before: perfect to support the impossible concept of a car made of humans driving along. Also, we linked the "tu tu tu-ing" with the speaker guy's voice, changing it to suit the progression of the story, giving an overall effect that really fits this commercial.

What was the outcome of the spot?globally, and locally?

Kubota: People around the world have said it is just like they thought Japan would be, and exactly the way they felt about Toyota. It worked because we accurately captured in our visuals the feeling the world has about "Japaneseness" and what Toyota stands for. In Japan, it had had a huge impact. It was the first time for Japan's Toyota to win an award at Cannes. In fact it was the first time a Japanese automaker (excluding local subsidiaries abroad) won at Cannes. The commercial was also mentioned in many blogs worldwide, even in countries where it never aired. It has given Toyota, and the whole Japanese ad industry, great confidence.