As Determined by the TVGuide.com Watchlist
READ THIS NEXT
Maybe your company should hire a Chief Sanity Officer

For the past couple of years Ad Age has had an editorial partnership with TVGuide.com focused on its Watchlist, a customizable entertainment guide that lets users make a list of their favorite shows, actors, etc. We're interested in Watchlist because each season the top 10 most Watchlisted new shows tend to have a high probability (up to 80%) of being picked up for full seasons.

For its users, Watchlist is a great service that lets them plan their TV viewing; for us, it's a sort of massive focus group of informed TV fans (the database of registered users hit 2 million earlier this summer). There's a "wisdom of the crowds" thing going on here.

A caveat we repeat every time: Keep in mind that Watchlist users are, essentially, publicly expressing hope that these shows will live up to hype -- as well as an intent to watch. Series that exhibit early promise and score full-season orders can and do, of course, still end up getting canceled later on (as storylines run out of steam, as networks stick good shows in bad time slots, etc.). 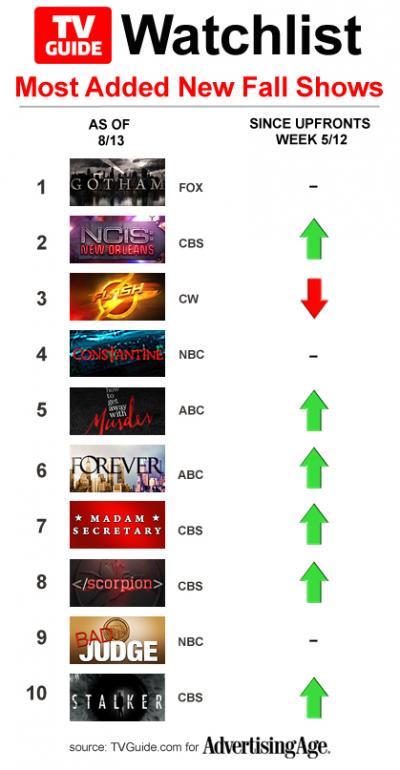 What can you make of this chart? TVGuide.com Editor-in-Chief Mickey O'Connor offers some insights:

• If it ain't broke: "Both CBS and ABC," O'Connor points out, "have decided to try to replicate past successes this season: A third 'NCIS' spin-off, this time in New Orleans, is at No. 2, and is sure to garner the big numbers of its predecessors. ABC, meanwhile, can't contain its excitement about its all-Shonda Rhimes Thursday-night lineup -- 'Grey's Anatomy,' 'Scandal' and the new 'How to Get Away With Murder' (No. 5). They've even rebranded the night #TGIT (Thank God It's Thursday). More like Thank God for Shonda Rhimes, amirite?"

• Comic-Con: "After languishing near the bottom of the Watchlist top 20 since May," says O'Connor, "CBS's new nerdy action dramedy 'Scorpion' (No. 8) -- it's like 'The Big Bang Theory,' but with running! -- snuck into the top 10 recently after a splashy Comic-Con debut."

• Shows with female leads: "Last year at this time," O'Connor points out, "there was only one show with a single female lead in the Watchlist top 10 (ABC's short-lived 'Once Upon a Time in Wonderland'). This year there are three: the aforementioned 'How to Get Away with Murder' with Viola Davis, Tea Leoni's 'Madam Secretary' on CBS (No. 7) and NBC's 'Bad Judge' starring Kate Walsh (No. 9).