Is Ad Fraud Even Worse Than You Thought? | Ad Age
Skip to main content

Is Ad Fraud Even Worse Than You Thought?

Bloomberg Businessweek Seems to Think So

Just how much of a problem is ad fraud? If you're a regular reader of Ad Age, you know it's a big problem -- though just how big depends on lots of variables, including the specific digital agencies, ad-tech vendors and publishers a given marketer choses to work with. And if you read our recent cover story on Google's secret war on ad fraud, you know that there are a lot of very smart people in the industry working to outsmart scammers. 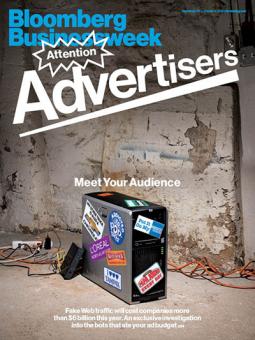 How Bloomberg Businessweek packaged the ad-fraud story for its cover

Now, Bloomberg Businessweek is joining the conversation with a cover story of its own, "How Much of Your Audience Is Fake?" (on newsstands today). Though little of it will be particularly eye-opening to Ad Age readers, it does offer up some colorful anecdotes about the buying and selling of dubious web traffic -- and it puts one particular publishing giant on the hot seat.

Bloomberg Businessweek suggests that Bonnier, the Swedish company that publishes Saveur, Popular Science, Field & Stream and other titles, has been building some of its video-centric websites by buying questionable traffic:

Soon after it started buying traffic, Bonnier's numbers began to jump. In the summer of 2014, several of the video sites had almost zero visitors, according to ComScore. By December, Saveur.tv had 6 million monthly visitors and WorkingMotherTV.com, 4 million, according to site data provided by Bonnier. In May traffic surged again: 9 million for Saveur.tv; 5 million for WorkingMotherTV.com. The numbers didn't pass muster with at least one big ad exchange: SiteScout, which aggregates and lists ad space for sale from more than 68,000 websites, says it blocks several of these new Bonnier sites for "excessive nonhuman traffic."

Bloomberg Businessweek reached out to Bonnier, which "says it doesn't work directly with SiteScout and was unaware its video properties had been blocked." More broadly, a Bonnier spokeswoman said the company screens its traffic and isn't aware of any problem or complaint.

The story also introduces us to a 28-year-old Ukrainian-born Brooklynite who calls himself Boris Boris (!), who's behind media properties you've probably never heard of, like iffy beauty site MyTopFace, on which Bloomberg Businessweek noticed ads, presumably placed via programmatic buying, for reputable advertisers. Boris Boris arguably serves up the best quote in the story when he declines to say how he came to be doing business with a specific revenue-driving affiliate program. "My balls will be cut off," he says by way of explaining why he won't reveal the name of the middleman who hooked him up.

You can read the full Bloomberg Businessweek story here.