The Seven Most Awesomest 'Idol' Moments This Season

Everything I Know About Branding, I Learned by Watching 'American Idol' (Thank You, Paula)
READ THIS NEXT
Maybe your company should hire a Chief Sanity Officer
Did David Cook's grunged-up 'Billie Jean' make Michael Jackson cry?
Credit: Ray Mickshaw

New-media and marketing strategist Noah Brier's genius new site Brand Tags asks visitors to play a game of word association to sum up their impressions of major brands in one word or phrase -- and then the site graphically displays the cumulative wisdom of crowds on a results page that puts the most common responses in giant type and lesser responses in proportionately diminishing point sizes. The predominant brand values of "American Idol," according to Brand Tags: 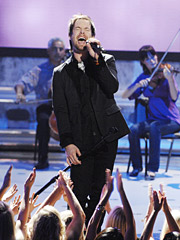 "American Idol" is, of course, the show we love to hate and (secretly) love to love. The true pleasure of this still-unstoppable entertainment juggernaut is that its highlights are often its lowlights. Thus my high/low list of the Seven Most Awesomest "Idol" Moments This Season. Think of it as a helpful crib sheet for either instant "Idol" pop-cultural literacy -- or an instant pop-cultural lobotomy.

This didn't technically appear on "American Idol," but it came to prominence solely because of the show: 13-year-old David Archuleta's precocious 2004 cover of John Lennon's "Imagine" -- from "Good Things Utah," a local TV show in his native state, an old clip that inevitably popped up on YouTube. Turns out the kid's been trotting it out for years!

Wait, did young David really reimagine "Imagine"? As Los Angeles Times music critic Ann Powers -- arguably the foremost chronicler of Idolalia -- wrote, "He'd have to be Mozart to have come up with that artful arrangement. It takes experience to so subtly rethink a song embedded in our shared consciousness. The person with that experience was Eva Cassidy. ... Cassidy recorded 'Imagine' in the style Archuleta basically copped" -- and to prove it, Powers pointed readers to an audio track on YouTube.

Cassidy's largely forgotten story really is quite amazing. A largely unknown singer who went on to sell millions of records, mostly in Europe, after her death, she wrapped up her pre-fame final performance in 1996 at a smoky D.C. club with the Louis Armstrong standard "What a Wonderful World" -- as she was succumbing to cancer (she was dead, at 33, within two months). I'm randomly giving away a copy of Eva Cassidy's posthumous compilation album "Imagine," which includes her cover of the title John Lennon song.

The re-emergence of Cassidy in the popular consciousness is part of something called "the 'Idol' effect": the way the show can rather randomly drive certain songs to the top of the charts. The best example of that this season is the way that finalist Jason Castro's cover of Jeff Buckley's cover of John Cale's cover of Leonard Cohen's "Hallelujah" ended up catapulting Buckley's version (one of my all-time favorite songs) to the No. 1 spot on iTunes. Like Cassidy, Buckley died tragically -- at age 30, in 1997, in a drowning accident. I'm randomly giving away a copy of Jeff Buckley's album "Grace," which includes "Hallelujah."

On April 29, Paul Abdul judged Castro thusly: "The first song, I loved hearing your lower register. ... The second song, I felt like your usual charm wasn't -- it was missing for me." For millions of viewers, it was a "Did I just black out?" moment, because didn't Jason actually only sing one song? Yep, as Randy Jackson pointed out, prompting flustered Paula to blurt, "Oh my God, I thought you sang twice! You know, this is hard!" Yay! Live TV! Anyway, a good rule of thumb for life in general when something makes no sense: It's not you; it's Paula Abdul.

THE KID IS NOT MY SON!

THE KID IS MY SON!

On May 9, according to TMZ, David Archuleta's apparently obnoxiously overbearing stage daddy, Jeff Archuleta, got banned from his son's rehearsals. Finally! A bigger villain than Simon Cowell!

~ ~ ~
To be eligible to win one of the two albums mentioned above, send me an e-mail with either "Grace" or "Imagine" in the subject line on or before midnight June 19.