Would You Wear Glass in a Bar? Would You, Could You, in a Car?
READ THIS NEXT
Maybe your company should hire a Chief Sanity Officer

In addition to being your media columnist, I'm actually rather renowned for being a sensitive and thoughtful expert on social mores and etiquette. (If you didn't know that, well, screw you. Jerk.) Today's column addresses reader concerns about the proper use of Google Glass, Google's trendy face-mounted internet-connected computing device, which has been in the news a lot lately (e.g., last week Google showed off a new, less geeky line of designer frames for Glass). Following the extended Google Glass Explorer beta-testing program currently in progress, Google is expected to make the headgear widely available to the general public later this year.

Q. Would you wear Google Glass in a bar?
A. No. The etiquette standards on this front were established early on by a Seattle restaurant and bar called The Five Point Café, which in March 2013 famously became one of the first establishments anywhere to preemptively ban Google Glass. "Ass kickings will be encouraged for violators" is an actual part of the bar's written policy. 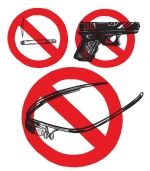 And then in November, another Seattle business, Lost Lake Café & Lounge, issued its own ban:

"We kindly ask our customers to refrain from wearing and operating Google Glasses inside Lost Lake… If you do wear your Google Glasses inside, or film or photograph people without their permission, you will be asked to stop, or leave. And if we ask you to leave, for God's sake, don't start yelling about your 'rights.' Just shut up and get out before you make things worse."

Q. Would you, could you, in a car?
A. I would not, could not, in a car. Granted, just a few weeks ago a San Diego woman's ticket for driving while wearing Google Glass was dismissed because there was insufficient evidence her device was actually turned on while she was driving. Good for her -- but not necessarily for the "rights" of Google Glass-wearing drivers, because meanwhile, Delaware, New Jersey and West Virginia are among the states considering laws that would specifically ban driving with Google Glass, and more will surely follow suit. Especially after the first Google Glass-related traffic accident makes headlines.

Q. Not in a bar, not in a car. Would you, could you, in the dark?
A. Um, I'm not entirely sure what you mean by that, but one dark place you shouldn't wear Glass is in theaters. You might have seen news reports about how in January a Glass-wearing man was grilled by Department of Homeland Security agents at a Columbus, Ohio, AMC theater for suspicion of engaging in movie piracy. He has prescription lenses fitted to his Glass frames, which is why he had them on at a movie. His device was off, but he was still detained and interrogated -- after the thing was literally snatched off his face by the DHS -- for more than three hours. AMC's after-the-fact statement: "While we're huge fans of technology and innovation, wearing a device that has the capability to record video is not appropriate at the movie theater."

Q. A train! A train! A train! A train! Could you, would you, on a train?
A. You mean like on the subway? I don't know about that. Somebody might snatch them off your face AMC-theater-style, and then you're out $1,500 (though the price is expected to drop by at least half when Glass becomes widely available -- but still). Or someone might think you're filming them, get mad and punch you in the throat.

Q. Would you like them in a house?
A. If it's your house, and you live alone.

Q. Would you like them with a spouse?
A. I suppose if you're in a failing, loveless marriage or some other kind of doomed union, sure. Google Glass could be really helpful in terms of adding another layer of chilly remove between you and your insignificant other, so you could give each other more "space" until you figure out who gets what in the separation.

Q. Would you, could you, on a boat?
A. Well, you're probably not going to get great reception on a boat. But yeah, given all the options, you are probably less likely to annoy people when wearing Google Glass if you're offshore somewhere -- preferably on the boat by yourself.

Q. Could you, would you, with a goat?
A. Dude, now you're seriously weirding me out.

Look, honestly, I would not like them here or there. With or without a goat. I keep thinking of what Wired's Mat Honan, who wore a Google Glass test unit for much of 2013, wrote in December: "Glass is socially awkward. Again and again, I made people very uncomfortable. That made me very uncomfortable. People get angry at Glass. They get angry at you for wearing Glass. … Wearing Glass separates you. It sets you apart from everyone else."

Q. Say! I will wear them anywhere!
Q. OK, good luck with that. You do what you want. I'm done here.